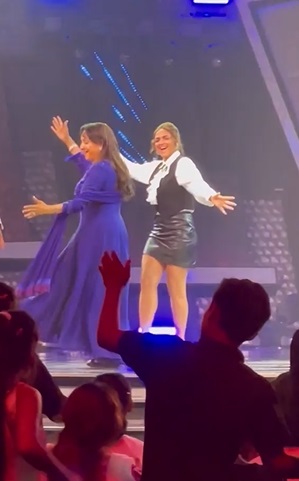 Bollywood actress Esha Deol expressed her love for veteran actress and her mother Hema Malini on the sets of 'Superstar Singer 2'. After looking at contestant Mani's performance and his love for his mother, Esha spoke about her loving bond with her mother.

Esha shared: "Looking at Mani's mother who works day in and day out to support Mani's dreams, reminds me of my mother because when I was a child the only thing I remember is how she would work and put in a lot of hard work all the time to support us."

Esha also shared a video of Hema Malini dancing with her:

Talking about her childhood days, Esha said, "My room was just in front of her make-up room, I used to look at her getting ready for work every day. As we started growing up, she would also get involved in our studies and just like any other mother she would cook our favourite food for us. Being a working mother, she was both a mother and father figure in our lives. She always encouraged us and supported our dreams."

Esha also added: "When I was a child, I used to be around my mother all the time, but as I grew up I was more involved with my friends. There was a time when we were in London, and I spent the whole time with my friends and she was left behind in the apartment. She felt that her Bittu (Esha Deol) has grown up and does not need her anymore. So, on this stage, I would like to confess that there can never be a day when I will not need her. Today I truly say from my heart that my mother is my best friend," she concluded.

Mohalla clinics will offer 100 types of clinical tests for f...