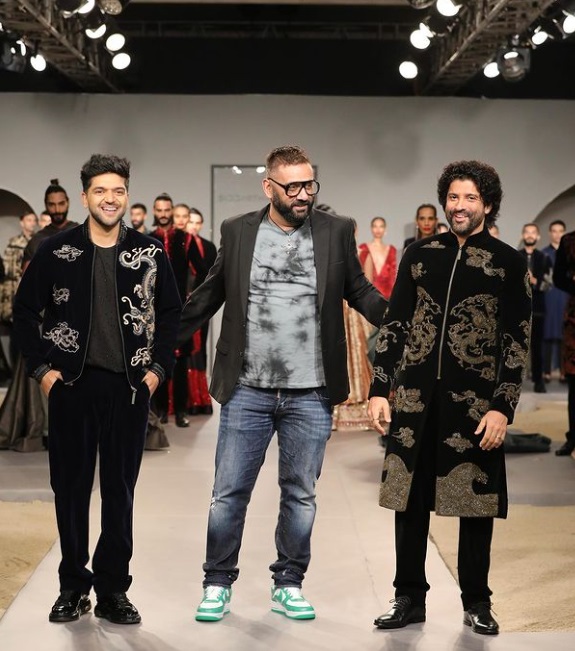 Guru Randhawa opened the oriental-inspired show for the designer. He walked oozing charm at his ramp walk debut, leaving the audience in awe of him. The singer wore a beautiful velvet bomber jacket that was adorned by 'zari' work all over.

Speaking about his experience, Guru Randhawa said, "I am walking for the first time for Siddartha Bhai. I was a bit nervous. I only did what he asked me to but it was a great experience overall."

Farhan closed the show in a Siddartha Tytler signature gold and black velvet sherwani that had crystal applique done all over it.

When asked why he decided to go with two showstoppers, Tytler chuckled and responded saying, "Why not? why have one when you can have two!"

The show took the audience on a magical oriental journey with elements like dragons on the ramp.

"There was a lot of oriental inspiration, there were oriental dragons, clowns, landscaping from China," said Siddartha.

Siddartha called this collection 'Shan Shui' which is the Chinese term for the art genre 'landscape'.

Siddartha's models walked the ramp in beautiful cocktail gowns, sarees, lehengas, sherwanis, bandh galas, and lehengas. However, the highlight of the entire collection was the touch of sporty bomber jackets and trenches that had beautiful couture-like detailing all over them.

I call this bit 'athluxury' which is a blend of athleisure and luxury," said Siddartha.The color palette this season drew inspiration from the jewel tones such as maroon, navy, olive, charcoal, and Siddartha's staple black.

Velvet was the winning fabric for Siddartha's show. Top-stitch, sequin overlay, quilting, and heavy crystal embellishments in the form of patchwork amped up the couture wear.

Coming back to the show stoppers, when asked what was his go-to outfit, Farhan revealed that he likes to keep it casual. "Be yourself, that is truly the only thing you can do. You can be the trendsetter in your own way...I like to wear joggers and a T-shirt. That's my comfort wear," said Farhan.

He added saying, "Shoes are very important for me. Shoes have to be very comfortable otherwise you can't really do a lot of things." ANI