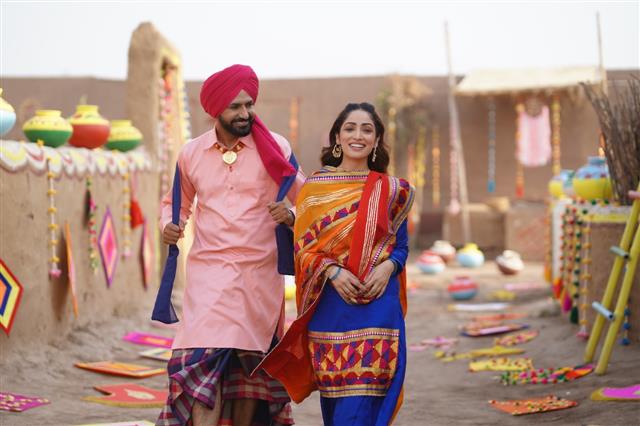 Shava Ni Girdhari Lal is Gippy Grewal’s third outing in 2021. Gippy as Girdhari Lal comes across as a simpleton. Even though he woos seven ladies in the film with cheesy dialogues, one cannot take offense, such is his innocence. In many ways the film does justice to an old Punjabi boli, Shava Ni Girdhari Lal. In a first, it features 52 known faces of Pollywood. It seems Gippy has taken revenge on the pandemic for keeping them all away from the camera. And no, it is not an assault on the senses as each character is well written and hence easy to remember.

The film is no doubt about Gippy, the trump card in the star cast of 52 actors, but the supporting actors have given their best to hold the film together. In terms of background and sets, the Covid impact is visible because not much is explored in terms of location. Even though Girdhari’s family is shown travelling to different villages, it does not feel the characters have moved an inch. Or, maybe they do, but the villages are more or less the same.<It is the curiosity who Gippy would end up with out of the seven heroines that keeps the interest going. Gurpreet Ghuggi in a negative role is new for Punjabi movie fans.

Vashu Bhagnani’s debut Pollywood production will leave you with quirky dance steps, say for instance Kuljeet’s hook-step and some memorable songs by Satinder Sartaaj. Another wedding number, Gori Diyan Jhanjran, sung by Sunidhi Chauhan, is the one every girl would love to play as her wedding song.