Guru and Saiee share palpable chemistry in the celebration video 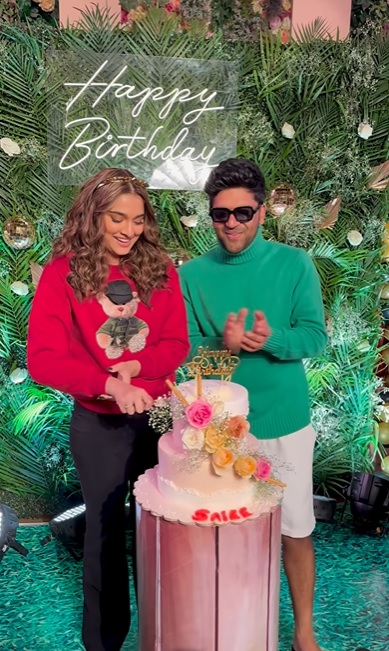 Guru Randhawa has shared a new video on social media where he can be seen celebrating 'Kuch Khatta Ho Jaay' co-star Saiee Manjrekar's birthday. Much in their characters Heer and Ira, the two conjure up a palpable chemistry in the video.

Both kept it casual yet Christmasy. While Saiee is dressed in a red bunny sweatshirt with black lowers, Guru opted for a green high-neck sweater with white shorts. The two look totally happy and in the last scene, Guru shares a bite of cake with Saiee. There's a glimpse of the entire'Kuch Khattaa Ho Jaay' crew present on the occasion.

Along with the video, Guru penned a heartfelt birthday wish for 'his Iraa'. He wrote, "Wishing my iraa i mean @saieemmanjrekar a very happy birthday. Such a pleasure working with you and start my journey as an actor with you. God bless you with all the happiness in the world. HAPPY BIRTHDAY SAIEE."

'Kuch Khattaa Ho Jaay' marks the film debut of Guru, who is known for belting out chartbuster songs like 'Lahore', 'Suit Suit' and several others.

Directed by G. Ashok, the movie also stars Anupam Kher and Ila Arun and presents the story of middle-class life with quirkiness packed in the form of a family drama. The producer of the movie Amit Bhatia also announced that the movie is all set to release on Baisakhi, next year.