Hema Malini and Rajesh Khanna got off on the wrong foot, shares the veteran actress : The Tribune India

Hema Malini and Rajesh Khanna got off on the wrong foot, shares the veteran actress 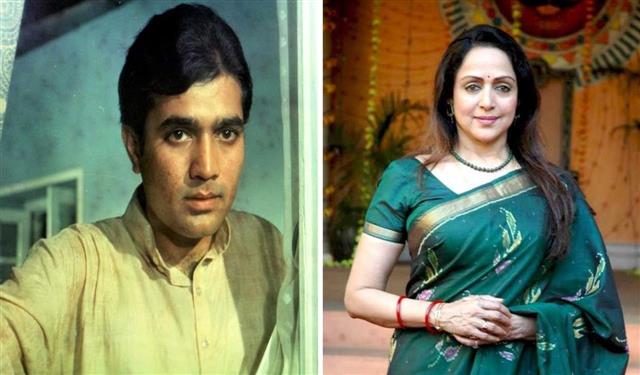 The veteran actress recalled working with late superstar Rajesh Khanna and her initial relationship with him.

Hema Malini referred to her late mother and said: "Though she has gone and is no longer with me physically but still I can feel she is there around me. Many times if I am doing some work, I feel like she is waiting for me and I have to go, then suddenly I realise that she is no more. But still she is with me all the time. And the same connection I have with my daughters."

"And I am happy to see that my daughters are giving the same affection care to their kids like I had given to them. They know the true meaning of being a mother and motherhood." The actress further gets nostalgic about her journey in Bollywood and also regretted that she couldn't explore much as a classical dancer in movies.

As she said: "Unfortunately when I came in movies that era was not the same as the time of Vyjayanthimala and Padmini, so I couldn't get many chances to do classical dance in movies." During the show she did a small performance on the song, 'Gori Tori Paijaniya' from the movie 'Mehbooba' starring herself and Rajesh Khanna.

"You know the best part of coming to these reality shows is that you can recall those moments from the past. I did a small performance but it was really great. I still remember that initially me and Rajesh Khanna never liked each other. But later we did the film 'Prem Nagar' together and from there we developed a good friendship that continued forever. In fact, his wife Dimple and children used to visit the sets during shooting."

Hema Malini seemed quite excited to be on the talent-based reality show and looking at the performances of the participants.

"I feel honoured because the channel felt that I am the right person to come on 'Mother's Day' special episode. So, they invited me and I accepted to be on the show. I enjoyed watching the performances of these contestants who come from very very low backgrounds. After so much struggle they manage to reach here and that is the most special thing about them," said Hema.

Hema further said that it was an enjoyable moment for her to be on the show and she was so impressed after listening to the flute performance by Anirban Roy that she gifted him a flute as a token of appreciation.

"He is an excellent flute player and he played the flute so beautifully like a very mature artiste. I was so overwhelmed that I gave him a flute symbolically as it felt like he is Gopal. In fact I gave a special performance and asked him to play the character of Gopal and I played Yashoda," added the actress while recalling her performance on the popular song 'Sundara Gopalam'.

The actress who has given numerous hit movies and remained a superstar of Bollywood for so long said that it was difficult for her to judge who is best among them. She reminisces about her conversation with judges  Mithun Chakraborty, Karan Johar and Parineeti Chopra.

"I was discussing with the judges that all these contestants are just incredible and it is so difficult to eliminate any of them," she shared.

Hema added how she was speechless and stunned while witnessing Tipu Pehalwan's acts and his variety of difficult stunts.

"He was just a normal looking man but had an extraordinary power that really left me in awe. He lifted the entire bicycle in his mouth and a jeep moved over him. And most amazing was that nothing has affected him. Even when the ice slab was broken over him. He has learnt that art and that was really astonishing," she concluded.