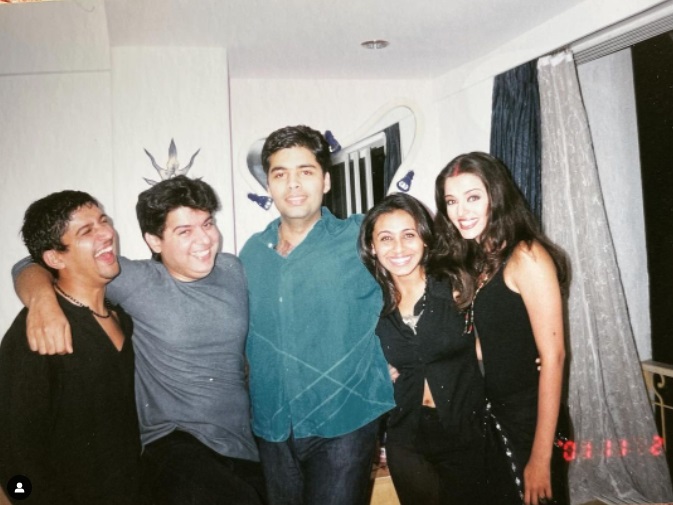 Filmmaker-choreographer Farah Khan was in a mood to visit some happy memories on Friday. She shared a rare throwback picture from her housewarming party. The picture features Aishwarya Rai Bachchan, Rani Mukherji, Karan Johar, Farhan Akhtar and Sajid Khan.

In this picture from 2001, Aishwarya Rai Bachchan is wearing sindoor on her forehead. But Farah Khan made sure to explain why. Farah wrote in the caption, "Flashback Friday... Housewarming 2001 at the first home I bought... PS_ Aishwarya Rai Bachchan had come straight from Devdas shoot thus the sindoor and rare pic of Karan Johar in non designer clothes."

Karan Johar made sure to be the first one to comment on the photo and his comment reads, “oh my God!” Farah replied to his comment, “So cute you were.”

A photo from the same housewarming party made it to social media in 2017, thanks to Farah. The photo had Shah Rukh Khan, Salman Khan and Sajid Daniawala. Sharing the photo, Farah wrote, “Continuing #blastfromthepast with sajidnadiadwala 2001.. #housewarming don't miss @iamsrk n Salman in rapt conversation behind."

Farah is a regular with some happy, star-studded throwback pictures. Last month it was a picture from her wedding which had Abhishek Bachchan and Hrithik Roshan dancing on her sangeet.