In pics: With Bollywood's who's who in attendance, this is how Farhan Akhtar-Shibani Dandekar's wedding bash looked like : The Tribune India

In pics: With Bollywood's who's who in attendance, this is how Farhan Akhtar-Shibani Dandekar's wedding bash looked like 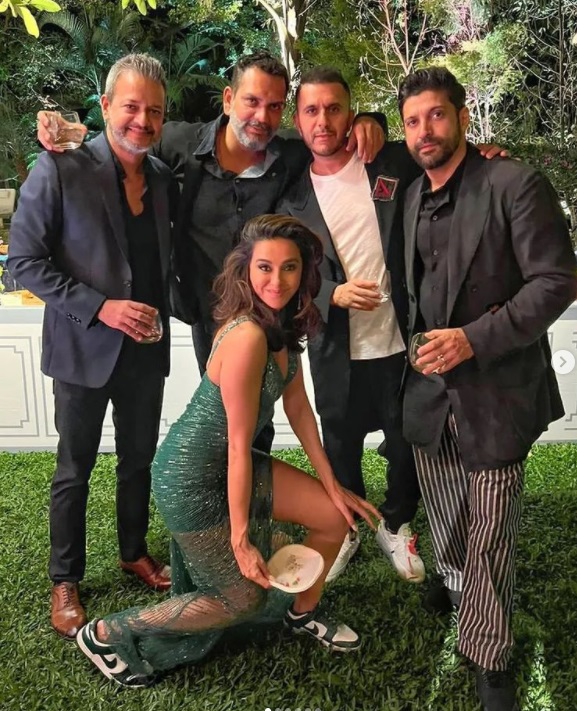 A still from the wedding bash at producer Ritesh Sidhwani's residence. Instagram/ritesh_sid

Producer Ritesh Sidhwani hosted a wedding bash at his residence in Mumbai's Khar area for his creative and business partner Farhan Akhtar after the latter's wedding with Shibani Dandekar.

The party hosted by Ritesh was attended by the who's who of the Hindi film industry.

When the newly wedded couple arrived:

Check out some of the shots from the party:

Also seen at the get-together were the Dandekar sisters, Anusha and Apeksha, along with Farhan's father Javed Akhtar and step-mom Shabana Azmi. Farhan's cousin and filmmaker Farah Khan was also spotted, apart from Siddhant Chaturvedi and Chunky Panday.

Here are some starry videos from the venue:

A glimpse from Shibani's wedding album:

In addition, Shah Rukh Khan's kids Suhana and Aryan were also seen arriving at the venue, they were greeted by Farah Khan. Suhana and Aryan also made a public appearance representing Shah Rukh's team Kolkata Knight Riders at the IPL auction in Bengaluru, earlier this month. Gauri Khan too arrived for the bash after sometime in another car.

Farhan and Shibani got married in an intimate ceremony on February 19 at Javed Akhtar and Shabana Azmi's farmhouse in Khandala after dating for four years.