The actress says '24 hours were fun' 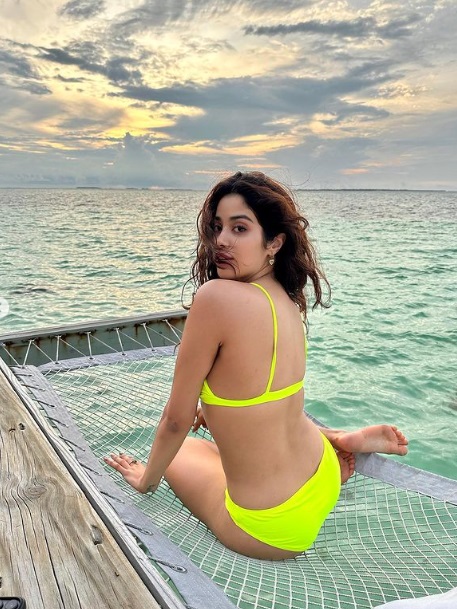 Janhvi Kapoor knows how to make the most of her time. Even 24 hours are enough for this young actress to have all the fun. That's what here latest photos from her vacation in the Maldives show.

The actress shared some really beautiful shots of herself enjoying the sun and sea in Maldives. In the series of pictures, there's one where she is wearing a multi-coloured floral monokini with a matching hat. There are pictures of her posing amidst nature in an orange swimsuit. In another photo, she is enjoying a softy in a pale green backless gown.

Aptly, she captioned the photos, "The last 24 hours were fun". To which her younger sister reacted with a 'Wow'.

Check out the photos:

In another set of photos, Janhvi gave a glimpse of the 'endless ocean' and chilling by the sea in a neon green bikini. "Messy hair, iridescent skies, salty winds and an endless ocean," she captioned it.

Here are the shots:

The posts have been bombarded with fire and heart-eyed emojis.

Janhvi, who was last seen in survival thriller 'Milli', produced by her father Boney Kapoor, will next be seen in a sports drama film 'Mr and Mrs Maahi' opposite Rajkumaar Rao. She recently wrapped the shoot of her film 'Bawaal' with Varun Dhawan. Directed by Nitesh Tiwari, the film is scheduled to release in theatres on April 7, 2023.