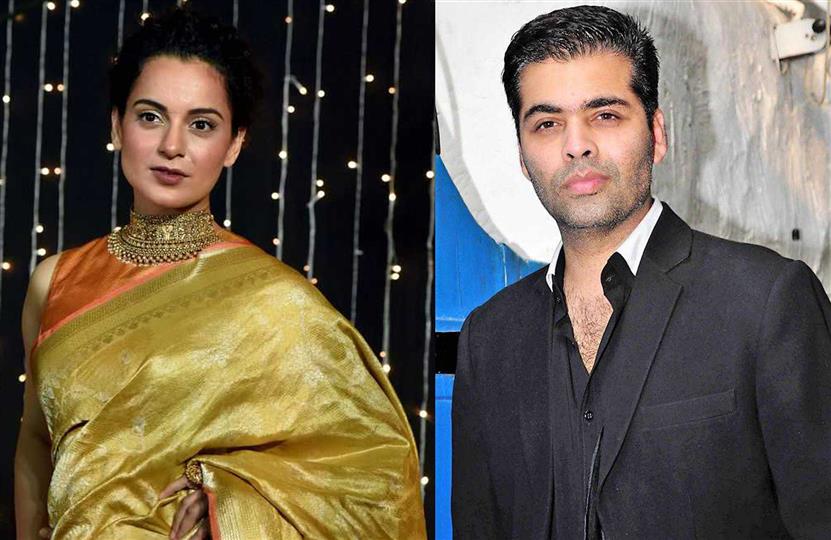 Kangana Ranaut has once again lashed out at filmmaker Karan Johar.

The actress has requested the government to take back the director's Padma Shri award for his latest production based on Indian Air Force woman pilot, Gunjan Saxena.

The actress's team shared a post on the microblogging website by Soumyadipta, that claimed the film had "twisted facts".

"Flight Lieutenant Srividya Rajan was Gunjan Saxena's course-mate at the Udhampur Airforce base. She declared that she was the first woman to fly to Kargil and not Gunjan. She confirms that the arm-wrestling scenes are totally false. She claims that #GunjanSaxena has twisted facts," the post read.

Kangana's team re-tweeted the post, and wrote: "I request government of India to take KJO’s PadmaShri back,he openly intimidated me and asked me to leave the industry on an international platform,conspired to sabotage Sushanth’s career,he supported Pakistan during Uri battle and now anti national film against our Army".

I request government of India to take KJO’s PadmaShri back,he openly intimidated me and asked me to leave the industry on an international platform,conspired to sabotage Sushanth’s career,he supported Pakistan during Uri battle and now antinational film against our Army. https://t.co/KEgVEDpMrF

Earlier she had slammed the Janhvi Kapoor-starrer "Gunjan Saxena: The Kargil Girl" via tweets posted by her team.

"All n all GS remains a petty film missing the larger picture and essence of a soldier's life, proving her opponents right who said we are here to protect Bharat Mata but you are here for equal opportunity, that's pretty much sums up the film in the end Gunjan wins not India.SAD," read one tweet.