The actress says 'This Friday, 200 cr will burn at box office' 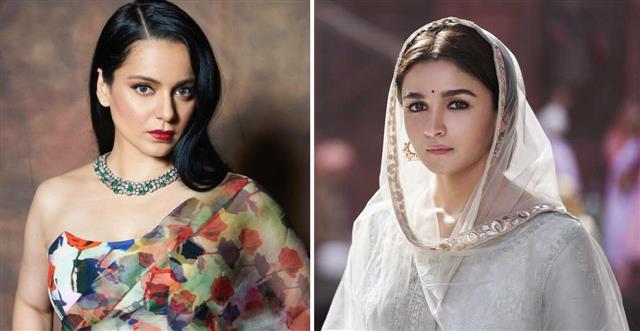 Yet again, Kangana Ranaut targets Alia Bhatt’s upcoming film Gangubai Kathiawadi, which is scheduled to release this Friday. Kangana shared a note on her Instagram Stories and said ‘wrong cast’ is the film’s biggest mistake. The actress also said ‘this Friday, 200 crores will burn to ashes at box office’.

Without directly naming Alia, she called her ‘papa ki pari’, ‘romcom bimbo’ and Mahesh Bhatt a ‘movie mafia’. Kangana in her not said that Hindi films are allegedly losing screens to South and Hollywood films because Bollywood is not ready to learn. She wrote, “This Friday, 200 cr will be burnt to ashes at the box office… For a papa (movie mafia daddy) ki pari (who likes to keep a British passport) because papa wants to prove that romcom bimbo can act… Biggest drawback of the film is wrong casting… Yeh nahi sudhrenge no wonder screens are going to South and Hollywood films… Bollywood is destined to doom jab tak movie mafia has power.”

She further added another note that read, “Bollywood mafia daddy papa jo to who has single handedly ruined the work culture in the film industry, has emotionally manipulated many big directors and forced his products of mediocrity on their cinematic brilliance, another example will be following soon after this release. People need to stop entertaining him, in this Friday release even a big hero and greatest director are the new victims of his manipulations.”

Kangana recently objected to a video of a little girl imitating Alia’s look from Gangubai Kathiawadi. In her Instagram stories Kangana wrote, “Should this child imitate a sex worker with a beedi in her mouth and crude and obscene dialogues? Look at her body language, is it ok to sexualize her at this age? There are hundreds of other children who are being used similarly.”

Directed by Sanjay Leela Bhansali, Gangubai Kathiawadi also stars Ajay Devgn, Vijay Raaz and Seema Pahwa in a pivotal role. The movie is an adaptation of a chapter from noted author Hussain Zaidi's book, Mafia Queens of Mumbai and features Alia in the lead role of Gangubai. The film is set to release on February 25.