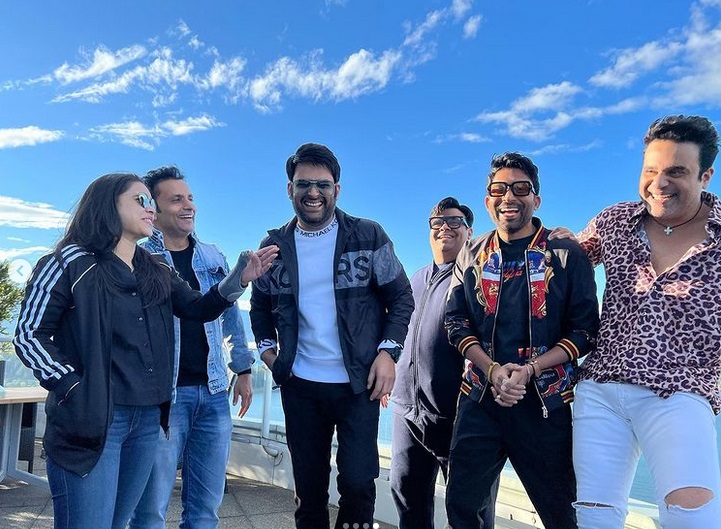 Kapil Sharma shares a fun picture with his gang in Vancouver. Instagram/kapilsharma

Kapil Sharma is a well-known name in the world of comedy and his popularity is not limited to India, this comedian has fans abroad and that we know by the way his shows are lapped up everywhere. After the successful completion of the third season of his comedy show The Kapil Sharma Show, Kapil Sharma is now on an international tour with his team.

The comic gave us a glimpse of their team in Vancouver through Instagram and they are clearly having fun together. The happy photos show Krushna Abhishek, Kiku Sharda, Chandan Prabhakar, Rajiv Thakur and Sumona Chakravarti with Kapil Sharma in the centre. The gang can be seen having a good laugh.

And the caption says, “Crew that laughs together stays together” and also included a heart emoji. What's more? Kapil Sharma also made sure to tell everyone that his ensemble was styled by none other than his wife Ginni Chatrath.

Take a look at some fun photos shared by Kapil Sharma:

Before these shots where the team is chilling in Vancouver, Kapil shared some photos of himself with the crew en route to Canada. When they were all set to travel to their next destination (Canada), the group showed us how excited they were about it. In the caption, Kapil wrote, “Flying to Vancouver now. Can't wait to meet our lovely fans in Canada.”

Apart from his show and the ongoing tour, Kapil Sharma recently featured in his OTT debut with Netfix special, Kapil Sharma: I'm Not Done Yet. He also has two films FirangiandKis Kisko Pyaar Karoon in the pipeline.