Voice of the young

Just what is it about Kishore Kumar's voice that makes it — to his fans at least — the most powerful, most touching voice that was featured in Hindi movies? 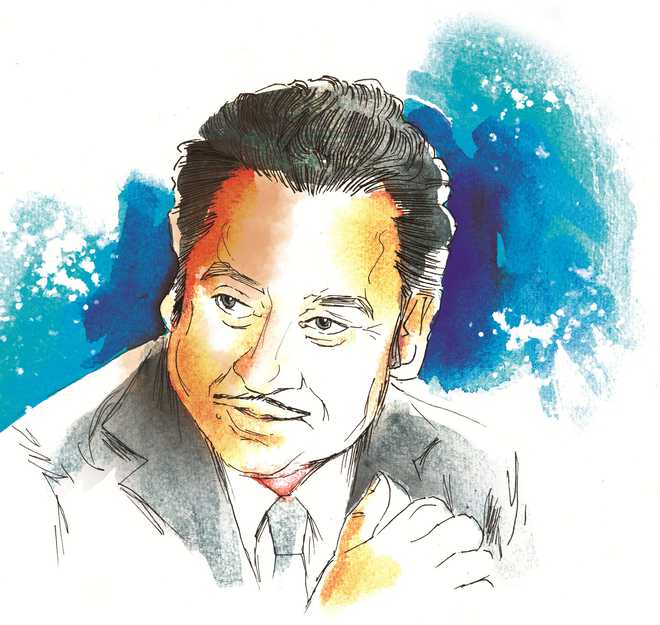 Kishore Kumar's voice, first recorded in the 1940s, is eternally youthful. He would be 91 today, and nearly 33 years have passed since he died, yet his golden voice is still loved — and possibly, due to streaming on mobile phones, heard more than ever before.

Kishore Kumar's voice is bewitching. He began with a nasal twang, singing Marne Ki Duayen (Ziddi, 1948) as a teenager in his idol KL Saigal's style; he came to his own in the 1950s, with possibly the most youthful version of his voice, as in Jeevan Ke Safar Mein Raahi (Munimji, 1955) or Hum Hain Rahi Pyar Ke (Nau Do Gyarah, 1950) or Ik Ladki Bheegi Bhaagi Si (Chalti Ka Naam Gaadi, 1958).

He acquired a deep base as he aged — or perhaps began to use it more when he started singing for actors like Amitabh Bachchan, Rajesh Khanna, Shatrughan Sinha, Shashi Kapoor and Sunil Dutt in the 1970s. Yet, he could always go back to the softest version of his voice, even in his late 50s — sample Tanha Mein Akela from Sachche Ka Bolbala, released in 1989, two years after he died at age 58.

Also read: Ayushmann Khurrana: I am a huge fan of Kishore Kumar

Just what is it about Kishore Kumar's voice that makes it — to his fans at least — the most powerful, most touching voice that was featured in Hindi movies? The answer is simple: His is the voice of youth; youth relate with it, older people want to relate with it.

He sang without gimmickry — no complex taans or murkis or harkats — just singing from the heart, each word sang with clarity, voice matched with the weight of the word. It expressed sadness with deep bass, rather than high-pitched singing, which tends to turn the male voice effeminate, weepy. His voice conveyed pathos without losing masculinity.

It was forever youthful. This is how Kishore Kumar ruled, and rules.

Javed Akhtar, both a friend and fan of Kishore Kumar, says that each time he sang with another singer, it was Kishore's voice that stood out — it's a typical fan's comment and is debatable. But what can't be debated with are numbers, which suggest that Kishore Kumar is the most popular singer among the golden generation of the Hindi film singers. When people used to buy cassettes and CDs of songs, HMV used to sell more Kishore Kumar music than that of the next three Hindi film playback legends (Lata Mangeshkar, Mohammed Rafi, Asha Bhosle) combined!

If you now go by downloads on HMV's website, or number of YouTube views, you'd find that Kishore's songs continue to dominate.

Kishore Kumar's versions of these songs became more popular than the other versions.

In such songs of the 1970s, too, Kishore's version was and remains more popular. The most notable of these was Mere Naina Sawan Bhadon (Mehbooba, 1976; also sung by Lata), a difficult, soulful composition based on raga Shivranjani. For an untrained singer to outdo Lata is simply amazing — it also underscored that Kishore Kumar took his singing very, very seriously, despite his loony behaviour. For him, the raga was just a name — he got RD Burman to change the recording date so that Lata's version was recorded first; he then took a copy of Lata's song and, note by note, dissected it, rehearsed it for at least a week, and sang it perfectly — without bothering to learn about the raga or its notation.

Lata's version is perfect, too, but Kishore's has a great infusion of feeling, heart in it. You could say this also about two other such songs Kishore and Lata sang in the 1970s — Khilte Hain Gul Yahan (Sharmilee, 1971) and Rimjhim Girey Sawan (Manzil, 1979).

A number from the 1980s that must be mentioned is Humein Tumse Pyar Kitna (Kudrat, 1981) — the other singer is the peerless Parveen Sultana, the great classical singer who effortlessly takes her voice to an impossibly high pitch. The song, based on Raag Bhairavi, is a great example of Kishore making a deeper mark with his simple and heart-touching rendition, even when paired with a great classical singer like Sultana. With him, the depth of the lyrics and the singing, straight from the heart, never fail.

There's a song that Kishore sang that was later rendered by Nusrat Fateh Ali Khan — Main Aur Meri Awargi, which Kishore sang for Duniya (1984). Khan's version appeared in the 1990s. Both songs are relatively forgotten, both are excellent — Kishore's version reflects calm and resignation, Khan's drips with high passion.

While on Kishore and Khan, let's not omit one song which in Kishore's voice (in Sautan Ki Beti, 1980, along with Anuradha Paudwal's) is, clearly, of lower quality than Khan's — Yeh Jo Halka Halka Suroor Hai.