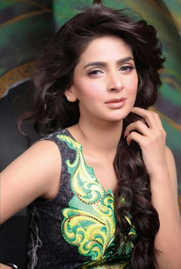 Pakistani actress Saba Qamar who is known for appearing in Bollywood film 'Hindi Medium' alongside the late Irrfan Khan, will soon be seen in an upcoming Zindagi original show 'Mrs & Mr Shameem'.

As the show releases on ZEE5, the actress is quite excited and looking forward to connecting with the Indian audience through the show.

Zindagi originals announced three new shows that will be released this year on ZEE5. Out of the three shows, one untitled show features Fawad Khan, another favourite of the Indian audiences, post his fame for 'Kapoor & Sons' and 'Ae Dil Hai Mushkil'.

Saba is part of a show titled 'Mrs & Mr Shameem'.

Keeping the theme of the new show in mind, Shailja Kejriwal, chief creative officer, special projects, Zee Entertainment Enterprises Ltd, said, "We are beginning the new year with a lineup of significant stories that are reflective of South Asian culture and society. While we continue to work with some of the best talent and crew across our upcoming shows this year, we are confident of striking a chord with the viewers through stories that are relatable and resonate across the globe."

'Mrs & Mr Shameem' is directed by Kashif Nisar, written by Saji Gul and it also features Noman Ijaz. Saba Qamar who is playing the female protagonist in the show said, "'Mrs and Mr Shameem' is a contemporary story that questions the stereotypical gender roles defined by society. The subject of this show is very different from what we normally see on our screens and I am so excited to be a part of this trailblazing Zindagi series."

Mehreen Jabbar, the director of the 'Farar', said, "'Farar' is a slice-of-life story featuring three imperfectly perfect women. It tells the story of modern young women and the obstacles they go through in their everyday lives trying to make a place for themselves in this challenging world. Zindagi is known to showcase stories that challenge societal norms and I am looking forward to collaborating with them to tell an important and unique story such as this." IANS