A tribute to Pandit Birju Maharaj, whose contribution to Kathak remains unparalleled

A dancer par excellence, a poet, a singer, a painter, and a percussionist, he was one with art forms 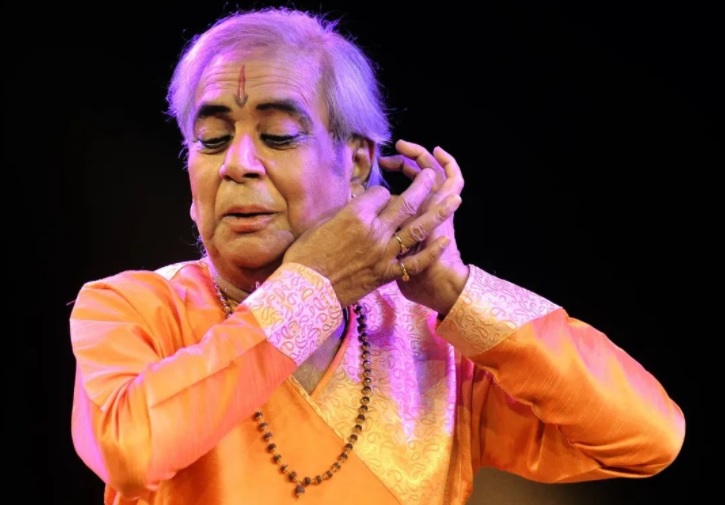 He epitomized dance in every pore of his being. Kathak doyen Brij Mohan Nath Mishra, popularly known as Pandit Birju Maharaj, an exponent of the Kalka-Bindadin gharana of Lucknow and recipient of India’s second highest civilian honour Padma Vibushan, breathed his last on Monday. But the life and energy he enthused into the dance form that came to him as much as a genetic inheritance as decades of lifelong tapsya will always remain unmatched. Livewire on stage, he would send viewers in raptures with his brilliant footwork, a sheer flicker of his eye and his incredibly mobile face mirroring more than just navrasas.

Born to a family of artistes, tracing their lineage to generations of performing arts, he was trained not only by his father maestro Acchan Maharaj, whom he lost when he was barely nine, but equally influenced by his renowned uncles Shambhu Maharaj and Lacchu Maharaj. He would call it triveni of influence, “Ganga, Jamuna, Saraswati coming together in me.” Of course, he himself was to change its idiom in ways hitherto unknown yet without compromising on its purity or intrinsic essence.

Katha kahey so kathak kehlaaye…  Kathak, the dance form of story-telling with its natural postures, he opined was organically open to innovations. Only he lent new expressions to this evocative dance form sans gimmickry. From full-length mythological and historical dance-dramas such as  Katha Raghunath Ki, Krishnayan,  Darbar-e-Salaami and Shaahi Mehfil, he naturally moved to abstract compositions such as Naad Gunjan, Ghunghru Sangeet and Laya Parikrama.

If for him laya itself was God, he was forever in pursuit of catching the waves and transmitting the same to audiences. Imbibing Kathak’s divine connect as well as the fact that it is inspired from real life, he would transform and add to its beauty.

“Dancing is the poetry of the foot,” said John Dryden, only Birju Maharaj was adept in poetry too and came up with a book of poetic compositions titled Brij Shyam Kahe. Dancer, poet, painter, singer and percussionist, he felt at home in all art forms and dubbed them as his ‘relatives.’ No wonder, he was in perfect unison while performing with other artistes, be it flamenco dancers, ghazal singer Jagjit Singh, tabla maestro Ustad Zakir Hussain or Thumri queen Girija Devi.

Nature for him was the biggest dancer of all in which every being resonated with a rhythmic sensibility. Only he sought rhythm even in inanimate objects such as a telephone or piece of iron or a newspaper and created dance pieces around nebulous concepts like editing too. His mathematical tihaais became a new lesson in the lexicon of Kathak.

As brilliant a performer as adept a teacher, he taught at the Shriram Bharatiya Kala Kendra and the Sangeet Natak Akademi Kathak Kendra from where he retired in 1998. Later, he started his own dance school Kalashram and was amused by parents who wanted their children to become dancers overnight without the rigueur that the discipline demands. One of his foremost disciples Saswati Sen performed in Satyajit Ray's ‘Shatranj Ke Khilari' for which he composed and sang 'Kanha Main Tose Haari', incidentally written by his grandfather Bindadin Maharaj. He may have trained many superstars like Madhuri Dixit (Devdas) and Deepika Padukone (Bajirao Mastani) for dance choreographies, but he will always be the undisputed superstar of  Kathak.

Not only Madhuri but hordes of his admirers would forever remember his impishness and his ada, which on stage became a master-class in abhinay. He may have deemed that women dancers are endowed with natural beauty and male dancers have to work twice as hard to achieve the same grace. But he defied gender binaries, enraptured one and all, as he became Radha on stage with effortless ease and easy fluidity.

“To remain a student till his last breath”, was his wistful desire. But his inimitable dancing style that imbibed tradition and innovation in equal measure would be a referral point for generations to come.