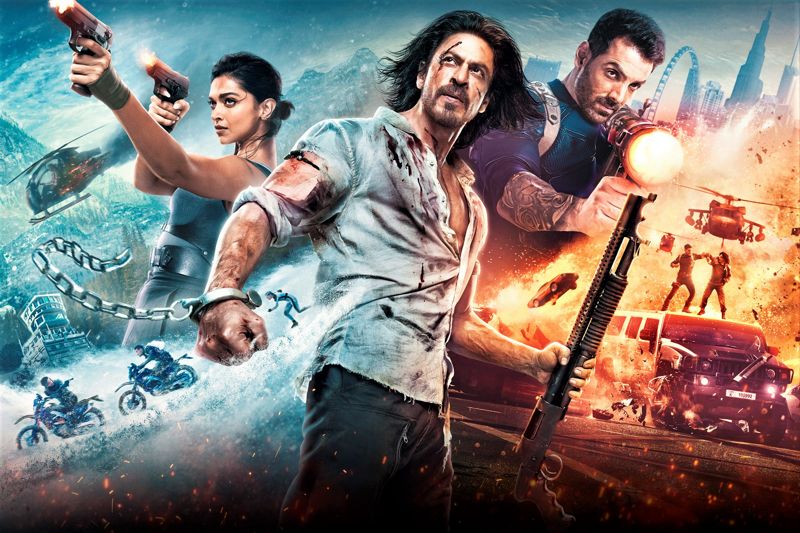 'Pathan' is reportedly set to be released across Indian in 5,000 screens.

Given the enthusiastic response of movie-goers in advance booking, industry experts are confident that Shah Rukh Khan-starrer "Pathan" will open somewhere between Rs 45 to 50 crore at the box office.

The Yash Raj Films project, which marks Shah Rukh's return to leading men roles after 2018's "Zero", is set to hit cinema halls a day before the Republic Day, which gives the Hindi film a five-day extended opening weekend.

The advance bookings for “Pathaan”, backed by Yash Raj Films, opened from January 20. The film is reportedly set to be released across Indian in 5,000 screens. It is a first Shah Rukh Khan film to have 6 am shows.

‘PATHAAN’ REVIVES SINGLE SCREENS… #Pathaan is all set to revive theatrical biz, going by the terrific advance bookings… Most importantly, as many as 25 single screens across #India - which were shut - will re-open with #Pathaan this week, given the unprecedented buzz. pic.twitter.com/ICGpywDTzh

Trade expert Taran Adarsh said “Pathaan” will revive Bollywood and will mark the beginning of a fantastic 2023 for the industry, which went through a lean period during covid and in 2022.

“The film is going to take a historic start at the box office with opening day collections of Rs 45 to Rs 50 cr. The box office revival will begin with ‘Pathaan', especially looking at its advance booking, which is very rare. It is a great start to 2023 despite being a working day,” Adarsh told PTI.

“Pathaan” will feature Shah Rukh in the role of the titular spy agent.

It doesn’t get BIGGER than this! Here’s the #PathaanTrailer that you all have been waiting for!

Celebrate #Pathaan with #YRF50 only at a big screen near you on 25th January. Releasing in Hindi, Tamil and Telugu. pic.twitter.com/AhPIjQqgZf

“We have a phenomenal opening of ‘Pathaan' with advances of close to 5 lac admissions for the first long weekend of the movie. This will be the first SRK film that will open at 6am in PVR cinemas,” Bijli said in a statement.

According to leading ticketing platform BookMyShow (BMS), over one million tickets have been booked.

The advance sales for "Pathaan" have been opening up in phases with over 3,500 screens available on BMS so far, besides there is a surge in demand to open up early morning shows as well.

"The response across India has been phenomenal with cinephiles choosing a cinematic experience as they opt for varied formats including 2D, IMAX and 4DX across cities," Ashish Saksena, COO, Cinemas, BookMyShow, said in a statement.

Another leading multiplex chain INOX is optimistic that “Pathaan” will break records.

"This film is going to break the advance booking of ‘KGF 2' and will do a business of Rs 45 to 50 cr,” Rajendra Singh Jyala, chief programming officer at multiplex chain INOX, said.

Shah Rukh took a break from movies after the lukewarm performance of "Zero". In between, the actor has only made cameo appearances in R Madhavan's “Rocketry: The Nambi Effect” (Hindi version) and Ayan Mukerji-directed blockbuster “Brahmastra Part One: Shiva”.

Not just multiplexes, the film is enjoying bumper advance booking in single screen theatres as well.

Mumbai's popular single-screen theatre Gaiety, Galaxy and Maratha Mandir has ticket booking of 70 to 80 per cent.

“For the first time, we are having morning shows starting from 9am for SRK fan clubs, who have almost booked the entire theatre,” Desai said, adding, the ticket prices have been kept nominal in the range of Rs 130 to Rs 160.

It is also one of the first films from Bollywood that's leading the charts in advance booking in southern parts of the country.

"South India has been particularly impressive showcasing an upward trajectory with Hyderabad, Chennai and Bengaluru contributing almost 30 percent of the overall advance sales so far.

"As the pace of ticket sales picks up further closer to the movie's release date, we are confident that 'Pathaan' is set to take the box office by storm," Saksena said.

Bijli too said the advance booking response from the South of India is very encouraging.

The movie is being released in Tamil and Telugu (and) it has opened really well in Kerala in its original language of Hindi. It has been an encouraging response to out of home entertainment experience to families,” he added.

According to YRF, about 25 cinemas, which were shut down due to Covid-19, are reopening for “Pathaan” given the unprecedented buzz.