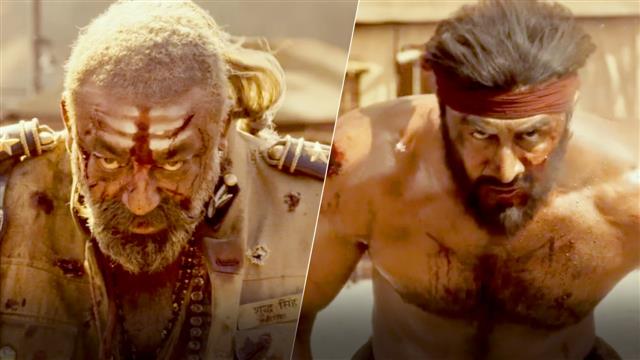 A still from Shamshera. File photo

Despite the combined presence of Ranbir Kapoor, who has returned to the big screen after a four-year hiatus, and the actor he has played in a biopic, Sanjay Dutt, "Shamshera" finds itself at a lowly No. 11 among opening weekends, according to the trade news and reviews site, www.bollymoviereviewz.com.

The period action drama produced by Yash Raj Films, which is expected to gross Rs 32-34 crore in opening weekend, opened in 5,550 screens across the world, so there's only one way to interpret the collection figure -- the movie hasn't really done well. It figures even lower than the dud most recently released by YRF, namely, "Samrat Prithviraj", which made Rs 39.4 crore.

The first weekend collection is the bellwether for which way a film is headed. The only recent exception was "The Kashmir Files", which picked up (and how!) as a result of the buzz about the film generated during the first weekend.

"Shamshera", according to www.bollymoviereviewz.com, cost Rs 150 crore to make, of which Rs 50 crore was Ranbir's fee. The only reason why YRF has no real cause for worry is the re-negotiated Rs 350-crore, four-movie deal the production house has inked with Amazon. Unfortunately, for the streamer, three of the four films — "Bunty Aur Babli 2", "Jayeshbhai Jordaar" and "Samrat Prithviraj" — have not done really well at the box office. Now, "Shamshera" doesn't offer much hope either.

YRF also has a Rs 500-crore, multi-year, multi-movie deal with Sony TV signed in 2019 for satellite rights. That's also money in the bank for YRF, but where does that leave the streamer and the general entertainment channel? Will they be wary now about signing such deals and focus more creating their own content? As they say, only time will tell.