Shruti Haasan: What is accepted now keeps changing, do whatever makes you happy 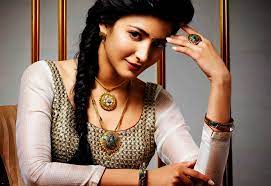 Actress Shruti Haasan's love for the gothic look and make-up is known to her social media followers. She shares how being an actor doesn't stop her from experimenting with a look that she connects with.

"I was really into metal and alternative culture from graphic novels to dark gothic literature, so it just felt like a natural extension, " the actress, who is also a musician, tells IANS.

Shruti does not agree that a gothic look make could be risky for actresses to play with the look.

"There is nothing risky about connecting to a look or vibe that looks authentic to you. The riskier thing to do in life is dressing, speaking, behaving and presenting yourself to the world in the way that they approve of, " she says.

The actress adds: "There is a risky thing about approvals as well. What is accepted now keeps changing. So, you may as well do what makes you happy without stepping on people's toes".

"Most people love it and the subculture and they get the vibe! There are those who don't personally lean toward the aesthetics but understand why someone would like it, " she says.

On the work front, Shruti was recently seen in the Pawan Kalyan-starrer "Vakeel Saab". She has started shooting for "Salaar", which stars Prabhas, and "Laabam" with Vijay Sethupati.