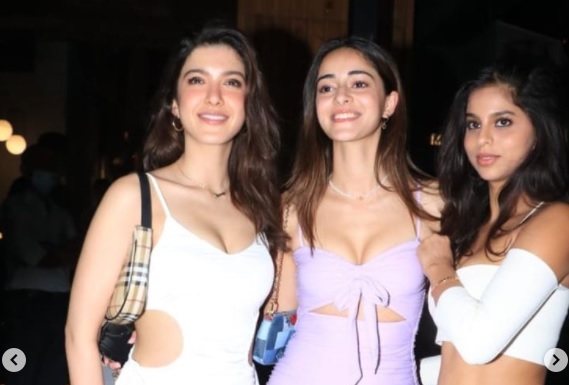 Childhood friends Suhana Khan, Ananya Panday and Shanaya Kapoor had a get-together on Saturday. The three star kids where spotted by paparazzi at a famous eatery in Bandra. All dressed up, there are videos of them outside the restaurant going viral on the Internet. When paps started calling their names to take photos, Ananya makes a gesture requesting them to not scream. As the three beautiful girls head towards their car, Suhana stops to pose for selfies with fans.

In the video, Suhana can be seen in a white cold-shoulder blouse with black stripped pants, Ananya chose a short dress in lavender colour and Shanaya’s pick was a plain white dress with deep neck and cuts around the waist. The three friends were clicked while going inside the restaurant as well as while stepping out from there.

Fans reacted to the paparazzi video with many compliments for the girls and Suhana’s ‘sweet gesture’ is winning their hearts. A fan said, “Suhana’s swwet gesture with those girls for selfie is (heart emoticon),”another fan commented, “Suhana is so sweet because she a daughter of king khan so humble. A fan wrote, “How sweetly Suhana posed for the lil girl’s selfie.” A comment read, “Suhana is so cute.”

Just before the dinner outing, Ananya shared a video on her Instagram Stories and wrote, “Stealing @shanayakapoor2’s clothes is my hobby.”

Earlier this week, the three friends were seen with their families at Ritesh Sidhwani’s star-studded bash to celebrate Farhan Akhtar and Shibani Dandekar wedding. While Suhana attended the party with mom Gauri Khan and brother Aryan Khan, Ananya was with her parents Chunky Panday and Bhavana Pandey. Shanaya too joined with her parents Sanjay Kapoor and Maheep Kapoor and brother Jahaan.