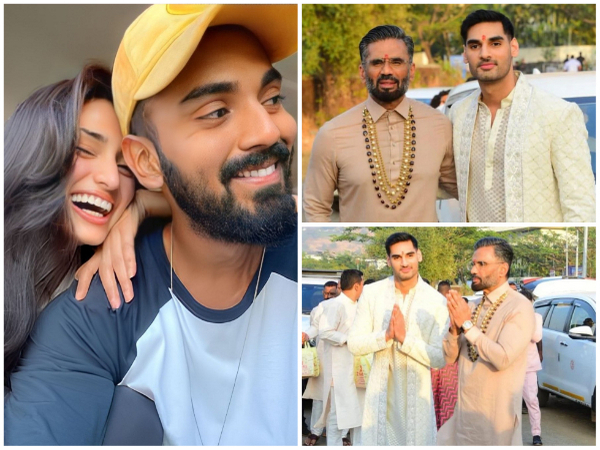 It's a joyous occasion at the Shetty household as today is D-day! Athiya Shetty has tied the knot with cricketer KL Rahul. Just a while ago, Suniel Shetty stepped out of his Khandala farmhouse with his son Ahan Shetty and interacted with the paparazzi.

He also gave the official confirmation of the news.

While the first pictures of the newly wedded couple are awaited, here's a glimpse of the father-son duo - Suniel and Ahan Shetty together.

For the wedding, both Suniel and Ahan looked dapper in traditional outfits. Suniel Shetty donned a traditional solid light pale brown coloured dhoti layered with a long men's necklace. Ahan, on the other hand, wore a white sherwani and looked extremely charming in it! There's another video going viral where the father-son duo are distributing sweets. Take a look:

On Sunday evening, Suniel Shetty's Khandala household was all lit up and many guests were spotted wearing traditional clothes and dancing, celebrating the couple.

KL Rahul and Athiya dated for quite a few years before they decided to tie the knot on Monday. The actress was also seen with the cricketer on a few tours of Team India.

The lovebirds made their relationship official the previous year as the Indian cricketer wished his ladylove on her birthday with a cute social media post featuring Athiya and himself.