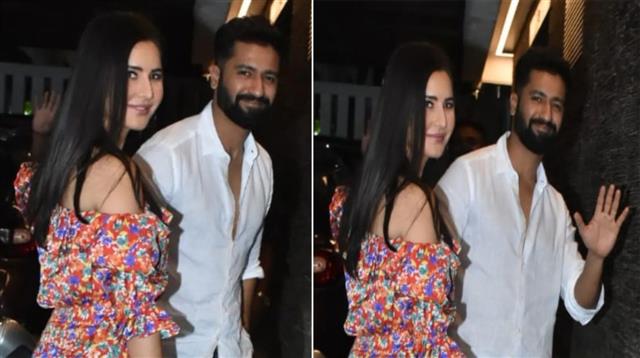 Farhan Akhtar and his wife Shibani Dandekar hosted a party for their friends. Among those present at the party were Bollywood power couple Katrina Kaif and Vicky Kaushal. Just when the couple reached the party venue, paparazzi were ready with their shutterbugs. And the much-in-love couple didn’t shy away from posing for the camera.

While Vicky kept it casual in a classic white shirt with a blue pair of denims, Katrina Kaif wore a floral off-shoulder mini dress with elbow-length sleeves. The multi-coloured dress with frilled hem was a perfect pick for a spring evening. With hair open and minimal make-up, she completed the look with beige heels.

Check out their stylish pictures:

Farhan hosted the party at his Bandra house and among those present were Ritesh Sidhwani, Karan Johar and Chunky Panday.

There's also a video from the occasion:

Vicky and Katrina recently attended the star-studded birthday party of Dharma movies CEO Apoorva Mehta in Mumbai. The party was hosted by Karan Johar. Katrina in an icy blue mini dress by Alex Perry and Vicky in a Rohit Bal creation, the two looked stunning.

With each public appearance, VicKat, as they are fondly called by their fans, show what it’s like to be in love.