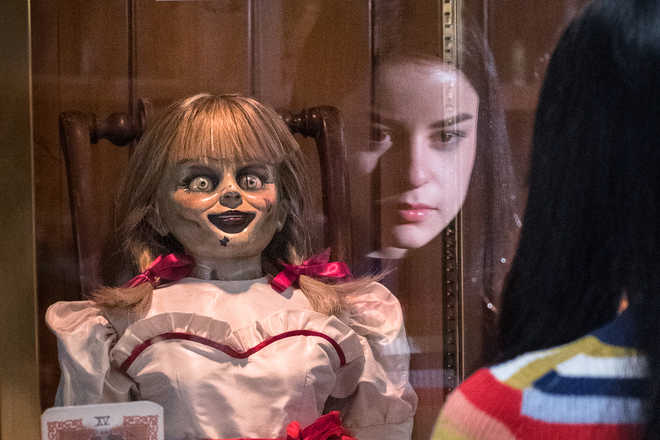 A still from 'Annabelle Comes Home'.

Are you a movie buff? This one is up for grabs! A finance company is looking for a person who can watch ’13 of the scariest movies ever made’ and in return it will pay them $1300. FinanceBuzz wants to find out whether the size of a movie’s budget impacts its effectiveness. The analyst will have a Fitbit to monitor their heart rate.

It says, “With Halloween around the corner, all streaming services and channels are going to start playing some familiar fear-inducing favorites. In honor of the upcoming spooky season, we at FinanceBuzz are dying to know whether or not high-budget horror movies deliver stronger scares than low budget ones.”

In honor of #spooky season, FinanceBuzz is #hiring a horror fanatic to watch 13 scary movies.

We'll pay the chosen candidate $1,300 & provide a FitBit to record their heart rate during their movie marathon.

In its release, the company also states that of all the different types of movies to hit the silver screen, movies of the horror genre are the most profitable, regardless of the budget set to film them. “For a movie to make your hair stand on end and send shivers crawling up your spine, it's not all about high-end special effects and CGI scares. More often than not, horror movies are scary because of their story… not the budget of the production studio. Some of the most spectacular slasher films and terrifying thrillers were made with chump change compared to superhero sequels and well known franchises. In 2007 Paranormal Activity was produced with just $15,000 and racked in over $193 million dollars from the box office.”

As FinanceBuzz makes a point, it also offers some perks too. Apart from the Fitbit, the hired analyst will, along with $1,300, get a $50 gift card to cover rental costs to fund the fright fest.

The list of 13 movies include, 'Saw', 'Amityville Horror', 'A Quiet Place', 'A Quiet Place Part 2', 'Candyman', 'Insidious', 'The Blair Witch Project', 'Sinister', 'Get Out', 'The Purge', 'Halloween (2018)', 'Paranormal Activity' and 'Annabelle'. These are to be watched between October 9 and 18.  The person will also rank the movies based on their prediction of the size of their production budgets.