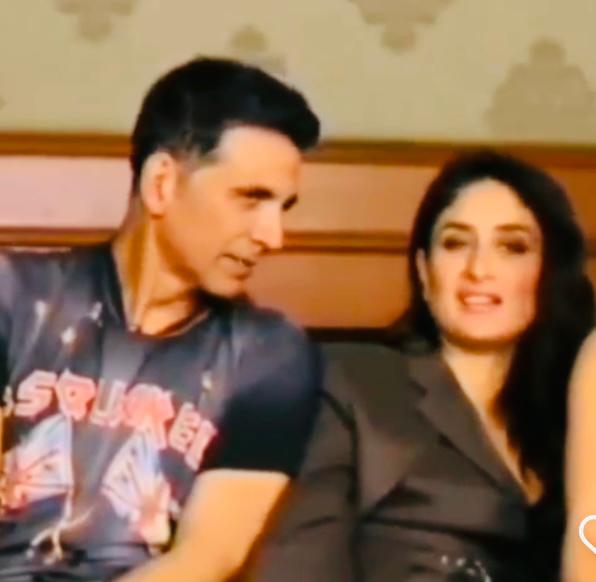 A still from video posted on Instagram by akkisarkhatikjai.

An old video of actor Kareena Kapoor has surfaced where she is sitting next to actor Akshay Kumar claiming that her love at first sight happened in from of the actor in Ladakh on the sets of Tashan.

Kareena Kapoor was answering a question as to how she fell in love for the first time.

"My love at first sight happened in from of you (Akshay Kumar) only na…Ladakh … Jo huva wahi huva,” she said.

This video, which has millions of view, has fans commenting saying that “even Akshay Kumar couldn’t digest her answer”, one commented: “Shahid tashaan”

As per Kareena, she fell in love with Saif Ali Khan on the sets of Tashan in Ladakh and went on to tie the knot four years later.

The two had already featured in two films (LOC Kargil and Omkara) before they came close on the sets of 2008 film Tashan.

Kareena was struggling with her career when Tashan happened. Her being size zero in Tashan was all the talking point then and she even fainted while trying to maintain that size.

Kareena had opened up in her Humans of Bombay post, “So just when I thought I was falling, Saif caught me. I’d met him before, but while we were filming Tashan, something changed. I wore my heart on my sleeve! He was so charming; I fell for him hook, line & sinker. I remember while shooting in Ladakh and Jaisalmer, we’d go on long bike rides for some alone time. We’d enjoy the beauty, have great conversations & just bond!” She said Saif “helped me heal and love myself”.

Saif is said to have proposed to Kareena twice on their trip to Paris. Kareena had said on the Vogue BFFs show, “He actually proposed to me a couple of months after we met in Paris. In fact, his father proposed to his mother also in Paris when she was shooting a film ‘An Evening in Paris’. And we were on a holiday in Paris as well and I was just like ‘Yeah, of course’.”

Saif had publicly declared his love for Kareena by getting her name inked in Hindi letters on his forearm. Saif was first spotted with the ‘Kareena’ tattoo in 2008, the same year as the release of Tashan.