It was the trailer of upcoming film 'Liger' in Mumbai 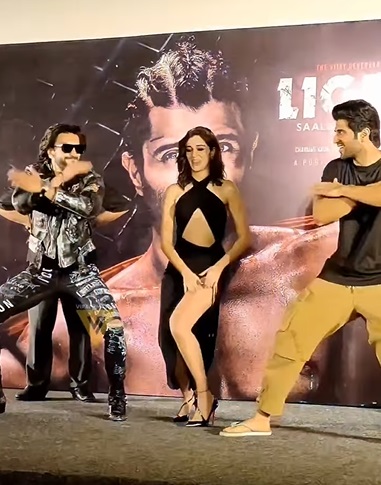 Bollywood superstar Ranveer Singh showed up at the trailer launch of Telugu superstar Vijay Deverakonda's upcoming film 'Liger' on Thursday in Mumbai. Showing support for the pan-India debutant, he adds that 'masala movie' is the flavour of the season now.

Ranveer appeared on stage in his forever high-energy avatar and danced along with Ananya Pandey and Vijay to the tune of 'Akdi Pakdi'.

The on-stage banter between Vijay and Ranveer made Karan Johar, who was also present there as the producer of the film, think of making a film casting both the actors together.

Praising the trailer, while interacting with Vijay, Ranveer said, "I think this is the time for masala films, and the audience is loving mass entertainers all over. This film is exactly that and I can't wait to watch the film sitting as the audience in the theatre. I love mass entertainers and I think all the love I got, is because of this brand of cinema. Vijay is gonna rock it!" Vijay, who is playing an MMA player went through a huge body transformation for the film and it was quite time-consuming according to the actor.

While chatting with Ranveer, Vijay said: "From the time I read the script, I decided to get my body right. Yes, it was tough but worth doing everything for this film. I have given my everything to Liger. Thanks to the pandemic, we have got the time for preparation."

Karan Johar's cares about his cast, look at this:

Asked if Karan is interested in casting Ranveer and Vijay together in a film, the filmmaker said: "If both of them are ready, I can sign them right away really! I think Ranveer is an actor who never had any problem with a two-hero film. He is not someone who wants all the focus on him in a film, he is a team player. He looks for character and not who are the other actors. In fact, we were making a film 'Takht' but it has got postponed now. Ranveer never had an ego on such things, he is an artist."