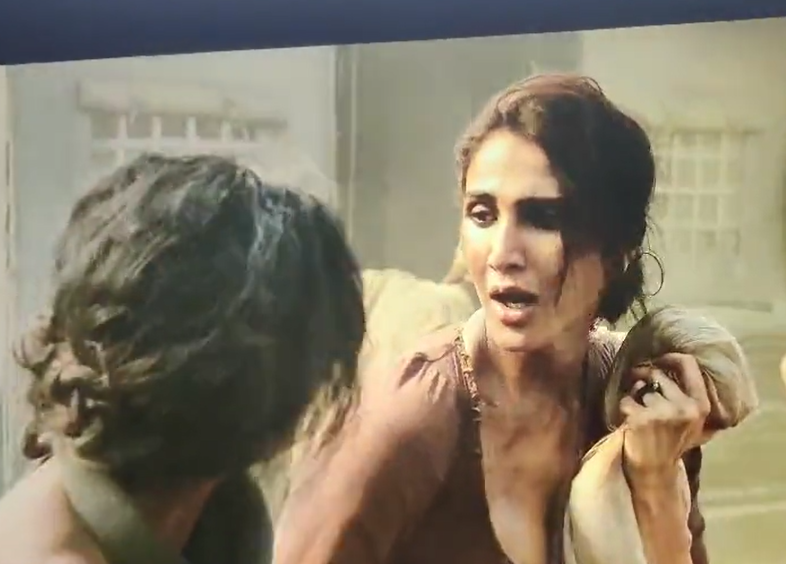 A video grab of the climax scene in Shamshera

The big-screen extravaganza could not impress the audience despite having a huge budget of around Rs 150 crore.

However, one scene from the climax of the movie left viewers in splits.

In a fight sequence played by Vaani, the actor can be seen performing a sword fight while holding a baby in her hand. However, whatsoever she’s holding onto appeared more like a hollow cloth than an actual baby or a prop doll.

Watch the viral clip from the movie here:

Let's just assume that there is a baby 👶#Shamshera #IseewhatIcant pic.twitter.com/4bS0KbV6dY

And then the cast and crew and fanboys will write cute long essays on how misunderstood #Shamshera is and how the audience is unnecessarily critical 🤡🤡🤡🤡 https://t.co/tBev381Muf

The video has left the eagle-eyed netizens question if the film produced by Aditya Chopra under Yash Raj Films even had an actual mega budget.

People were not convinced by Vaani’s conviction of holding an imaginary child in a swaddle flailing around. They were amazed to find how unimportant the baby was to the makers that they didn’t even bother to get a prop doll for the scene.

Twitterati had a lot to say:

Uff that's a massive goofup for a 150 cr movie. https://t.co/j8QkpuwoIX

I watched it last night and i noticed this in whole climax that it's so visible that they r shooting without baby, at least they could edit and add baby face there👎

Seriously.. atleast show a real baby.. a real one can never be held like that. In one scene the eyes of the so called baby were visible.. its a doll 🤭 #ShamsheraOnPrime #Shamshera

The baby is fighting his own battle

We used to get atleast a baby sized toy and wrap it up for out stage play in college, and these guys didn't think it was required! M amazed!

For a 150 crore budget movie this is the heights of foolishness 🤦‍♀️🤦‍♀️ https://t.co/ZUJuWAXZGc

And they ask why bollywood is failing! https://t.co/nSB0N5voKD

Well, we hope the other film-makers are taking notes for their forthcoming projects.