India’s move on wheat exports is cognisant of the fact that market prices are largely determined by availability. In the typical situation of rising prices, there is a tendency by sellers to hoard stock to artificially raise prices — they are unwilling to augment supply at the current prices despite reasonable stocks at their disposal, in anticipation of higher prices.

INDIA’S wheat export policy was modified from ‘free’ to ‘prohibited’ vide a May 13 notification of the Directorate General of Foreign Trade, with two exceptions — allowing exports wherein an irrevocable letter of credit was issued not later than the date of the notification, as permitted by the Union Government to countries to meet their food security needs based on their request; and, wheat consignments handed over and registered with the customs (followed by a relaxation announced on May 17). The notification essentially entails two priorities — to strengthen the food security of India, neighbouring and vulnerable countries; and to keep inflation and inflationary expectations in check. Last month, the International Monetary Fund had urged India to ‘prioritise food security and expand transfers to the vulnerable’. 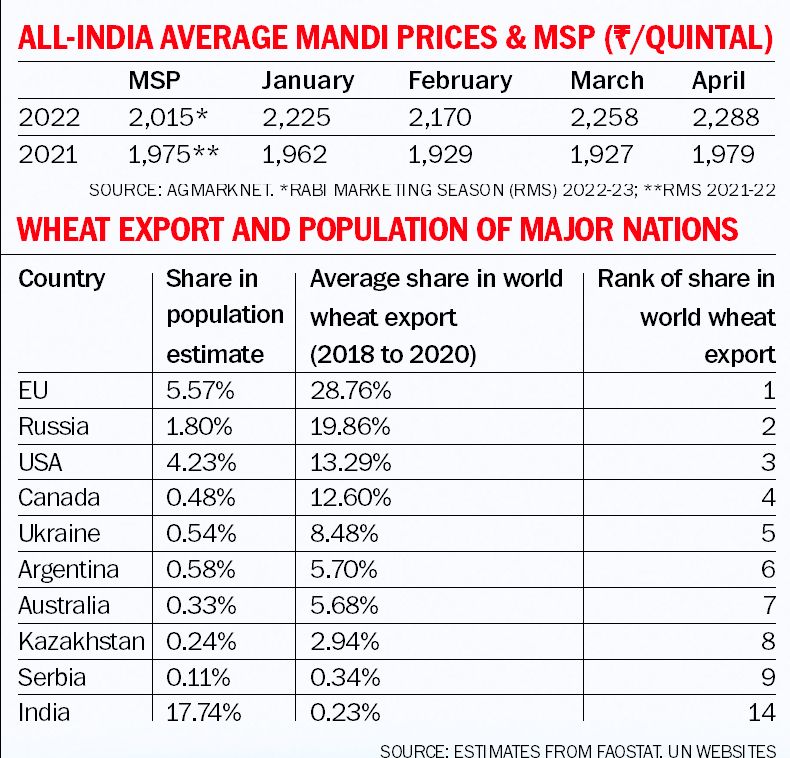 In the given context, India’s move is balanced since it is cognisant of the fact that market prices are largely determined by availability, given the stable demand. It clearly appreciates the difference between supply, which is a flow concept, and stock, which is a variable at a particular point in time. In the typical situation of rising prices amidst crises, coupled with inflationary expectations, there is a tendency by sellers to hoard stock to artificially raise prices — they are unwilling to augment supply at the current prices despite reasonable stocks at their disposal in anticipation of higher prices, which in turn may raise current prices. Thus, the move aims to discourage hoarding.

Rising mandi prices have led to lower procurement of around 195 lakh metric tonnes (LMT) in the current year as compared to 433 lakh metric tonnes in the previous year. The all-India average mandi prices have sustained above the Minimum Support Price (MSP) for January to April 2022, whereas prices largely remained below the MSP for the corresponding period in the preceding year. This reflects the fact that with regard to the differential, remunerative prices beyond the MSP have accrued, which is why the growers have opted to sell to the market rather than the procurement centres of the Food Corporation of India; as regards the procured amount, that too has ensured the MSP to the farmer. Production in the current period is estimated to be slightly lower at around 105 LMT, to an extent on account of the unprecedented heatwave affecting output, from the earlier estimate of around 111 LMT. Further, the period of the current procurement season has also been extended until May 31 so as to ensure that the benefit of price support is available, especially in market areas where prices may be prevailing below the MSP.

Wheat exports have witnessed a significant jump from 2.17 lakh MT during 2019-20 to 21.55 lakh MT in 2020-21 and 72.15 lakh MT in 2021-22! Further, 11 lakh MT was exported alone during April 2022. While remuneration to growers has surged in both domestic and export markets, India’s magnanimity to strengthen global supply chains is personified by the rising trend in wheat exports and the current commitment to supply wheat under government agreements. For the sector as a whole, agricultural exports reaching the $50-billion mark for the first time during 2021-22 is another testimony to this fact.

Further, as on May 13, the all-India average retail price of wheat at Rs 29.62/kg was 13.7% higher than a year ago. The current crisis has also fueled inflation the world over, including India, as has also been indicated by rising mandi prices noted above. While inflation purely arising from mismatch in real factors (demand and supply) is still acceptable, the speculative component of inflation needs to be effectively curbed (easier said than done). The Reserve Bank of India recently decided to hike the repo rate by 40 basis points to 4.4% and the Cash Reserve Ratio by 50 basis points to 4.5% to rein in inflation. Headline Consumer Price Index (CPI) inflation is estimated at 8.38% (with inflation for cereals and products being 5.96%) in April 2022, whereas the medium term target is 4%+/- 2%, while supporting growth. Thus, letting inflation (of which food inflation is a crucial component) go too much out of control would have concerns for macro-economic stability and growth as well. This also justifies the timely intervention in amending the export policy for wheat.

It is also appreciated that India has given due consideration to food security concerns of other countries as well (by providing an enabling clause to nations in need), at a time when the world is continuously witnessing sanctions (which are unilateral and insensitive to the vulnerabilities of countries affected) which have exacerbated global supply chains, besides the Russia-Ukraine conflict. Sensitivities, both internal as well as external, have been taken care of. The total allocation of foodgrains (rice and wheat) under the Pradhan Mantri Garib Kalyan Anna Yojana (PM-GKAY — one of the component of the economic packages to mitigate the hardships of the poor during the Covid-19 pandemic) from April 2020 till November 2022 is about 9.99 crore tonnes, has been lauded for its effort to secure nutritional security to the poor and vulnerable in these challenging times.

An analysis of the share of major wheat-exporting countries (variable in consideration being average quantity exported from 2018 to 2020, as reported by the FAO) alongside their population estimates (2022, UN estimates), shows that India is ranked 14th as regards the share (0.23%) in the global wheat export quantity while being the second most populous country in the world. This quantity has substantially risen during 2021 and 2022, indicating India’s resilience despite high domestic commitments. The top 10 countries account for 98% of the world’s wheat exports but taken together account for just 14% of the global population.

This shows that these countries are in a much better (rather more flexible) position to augment wheat exports as they are less dependent on the commodity vis-à-vis their domestic requirements. Perhaps time has also come for a serious reassessment of the perception of global responsibilities, followed by action for beating down speculation.

Asha is Deputy Director, Dept of Pharmaceuticals, and Kumar is Junior Statistical Officer, Dept of Consumer Affairs, Govt of India. Views are personal