A retired teacher’s message to the fraternity: You are no less good, may be even better, reclaim your place 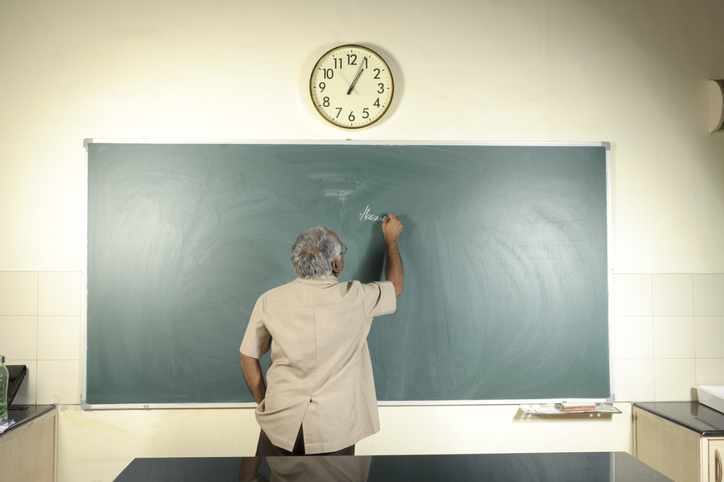 Teachers’ Day is celebrated every year on September 5 — the birthday of Dr S Radhakrishnan, one of the most illustrious teachers of our times. No doubt the halo of glory around the day has faded a little and the annual celebration has been reduced to a mere ritual, still the commemoration is a befitting and well-deserved tribute to the towering figure.

The teacher has undoubtedly been accorded an exalted status in the Indian tradition. The importance of the role of the teacher in shaping the character, personality and career of students and thus in guiding the destiny of the nation can never be exaggerated. The teacher has been variously designated as a nation-builder, pathfinder, friend, philosopher and guide. All the actions of the teacher, including the reproach and reprimand, are considered to have only one motive behind — the welfare and betterment of students.

But Teachers’ Day is not merely a day to extend greetings and felicitations to teachers or confer awards and honours; it is a day of soul-searching, of critical analysis of the platform where the teacher stands today. Does he really deserve the glorious appreciation and commendable honours which he seeks? How much of the dignity which the teachers of the old wielded has he maintained? Does he perform his teaching duty with a sense of service, or he only craves for material gain? Is he aware that he is a role model to be followed and that morality and integrity are his watchwords?

The current scenario with regard to the position and reputation of the teacher in society, right from the elementary teacher to the university don, presents a dismal picture. The media frequently exposes and displays the ugly, immoral, shameful and even heinous activities of one teacher here and the other there. No wonder that epithets like ‘vultures’ and ‘hawks’ have come to be associated with such teachers. They may be only a handful in number, but they prove a blot on the whole class and tarnish its otherwise bright image. Let aside academic deterioration, the disdainful decline in morals is all the more condemnable. The trends are indeed challenging and command the attention not only of the administrative authorities, but also of all enlightened citizens.

We heap abundant praise on the teachers of the past most probably because we have no patience with their current-day counterparts. It has become almost a convention to shower admiration on the old pedagogues, but have a low esteem of the present-day generation of teachers. Now, it is very difficult to say with conviction that there were no black sheep in the teaching flock of the past. It may be argued that their dishonourable activities passed off without much uproar as press and electronic media were not so active. Take, for example, the case of corporal punishment. It was commonly believed that the teacher’s beating was well-intentioned. But today’s teacher must realise that not only the circumstances, but the laws have also undergone transformation. He must spare no effort to befit himself in the changing environment and equip himself with the new techniques to play his role positively.

Another point deserves careful examination. In the two-tier system of education — government schools and convent/public schools — a wide gulf has occurred. College teachers with government school background confronting students passing out from convent schools face several problems, including those of pronunciation and expression. The situation becomes awkward when the teacher turns out to be incompetent and his students have wider academic knowledge than him. There are examples where some brilliant students could not score the expected marks in examination perhaps because their answers happened to be beyond the comprehension and range of the examiner. The remedy lies in holding occasional in-service training camps, orientation, refresher courses and other similar academic exercises for the teachers.

It would surely be incorrect to claim that the ancient gurus or past teachers had superior academic standards. According to Shaw’s theory of Life Force, every new generation is wiser, more active, more intelligent than the previous one. How can, therefore, the teacher of the new generation alone be inferior? The moot point is the environment; perhaps the society itself is partly responsible for the teacher’s moral fall. The teacher is himself a product of society and we know mangoes can never grow on cacti.

The dark clouds surrounding the figure of the teacher should not dishearten and disappoint us. Innumerable conscientious and well-meaning teachers still exist who are committed to the cause of education. They still carry forward the torch of knowledge and learning and will never let it peter out. Only the younger ones among them will have to be more conscious and curious. They must bear in mind that teaching is still a noble profession and they must dedicate themselves to this great cause. They indeed have a heavy responsibility on their shoulders; the nation looks upon them with diehard optimism.

Wordsworth once said, “Every great poet is a teacher, I would like to be considered either as a teacher or as nothing.”

One reason probably for the negligence of the teacher is that teaching has never been regarded as a lucrative job. Once an elder in a village asked a teacher with several years of standing, “Have you got some job or are you still twisting children’s ears?” Needless to say that the elderly gentleman was too ignorant to appreciate the noble work handled by the teacher. The teaching environment at present has actually grown ignominiously vicious, but this day will prompt and motivate the teachers to rejuvenate themselves.

A teacher can still stir the soul of the nation, put a new lease of life into the diseased bones of the profession.

Awake, arise and act with courage in heart and faith in God, strive conscientiously, vigorously and honestly so as to regain the crowning glory that you once had and that you richly deserve!

The writer is a former member of the Haryana Public Service Commission, and a retired college teacher