A rutted road to justice for Bilkis Bano and other sexual assault survivors : The Tribune India 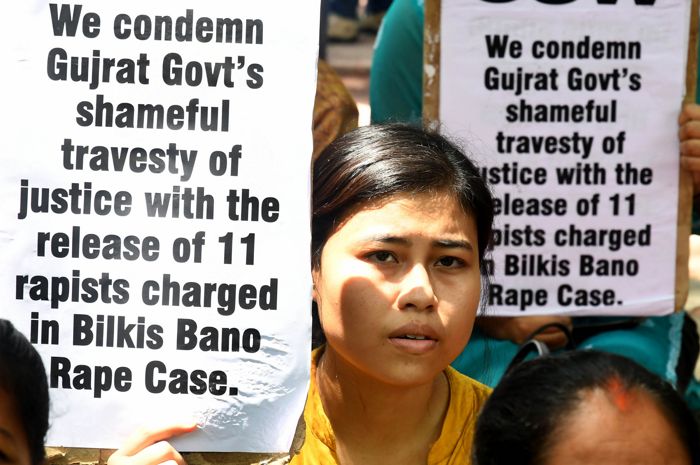 “How can justice for any woman end like this?” The shock reaction captured Gujarat riot victim Bilkis Bano’s horrors as the 11 men who had raped her and murdered several members of her family in March 2002 walked out of Godhra jail on the 76th Independence Day. The Gujarat government had remitted the life sentences awarded to them for brutal crimes, which included the killing of a three-year-old. Bilkis was herself five months’ pregnant at the time.

As images of her violators arriving to a welcome of garlands and sweets went viral, something in Bilkis Bano died. What died was faith in justice that took years to build and seconds to break. In an insult to her lifelong injury, she had no idea of what happened.

A faint ray of hope surfaced later this week when the apex court issued a notice to the Gujarat government on a petition challenging the remissions, that sparked a public outrage.

The anger was compounded by the fact that the pardon came the same day as Prime Minister Narendra Modi, in his address from the Red Fort, urged respect for women.

The case also reignited the painful debate around the state’s continuing apathy towards a survivor’s struggle along the very lonely road to justice and healing.

“After the Bilkis Bano case, we have nothing to assure the sexual assault survivor that once you have made your case, the state will take care of you. What has happened is unheard of. It is a bigger blow for the minority women. It is like telling the survivor she is on her own,” says Sangeeta Rege, a Mumbai-based researcher who works with rape survivors and helps them navigate the brutal challenges of the system.

Activists and lawyers find the impunity surrounding remissions to Bano’s rapists shocking. The fact that the Gujarat government pardoned convicts sentenced for life without even informing the survivor is alarming, they say.

At the heart of the matter is whether the BJP-led Gujarat was within its power to grant these remissions, especially when the sentence had been awarded by a CBI court in Mumbai in 2008.

Complex issues of jurisdiction — which state could have remitted the sentences if at all, Gujarat or Maharashtra — linger with legal precedence supporting plea for pardon by the same state where the sentence was awarded.

In this case though, Gujarat acted after the apex court in May directed it to consider the petitioner’s application for premature release noting that the case was shifted to Maharashtra only for the limited purpose of trial and later the convicts were sent back to the Gujarat prison.

The court also permitted the remission applications of Bano’s culprits to be reviewed under a 1992 Gujarat policy that makes no exception for heinous crimes as against a 2014 Central policy that does, and noted that since the sentences were awarded in 2008, the 2014 policy will not apply retrospectively.

Experts, however, argue that mere eligibility for remission does not entail guarantee for remission. Lawyer Vrinda Grover says there is nothing wrong with the application of the 1992 policy which only states that if a convict has completed 14 years of sentence, he or she is eligible to apply for remission.

“But everyone who applies does not get remission. It can be no one’s case that Godhra jail does not have any convict who has served more than 14 years of sentence. Also, the Supreme Court has clearly laid down that the questions to ask when reviewing an application for remission is the nature of the individual’s crime and its impact on society. In the gruesome case at hand, the answer to this touchstone question of law is not very confusing to find,” she reasons, hopeful that the highest constitutional court will remedy the wrong.

Grover adds that the grant of remission is about the exercise of executive discretion which, under the set principles of law, has to be in a manner that is just, fair and reasonable. In this case, state discretion has been exercised arbitrarily, the lawyer notes.

Also, all jail manuals state that the person being pardoned should have expressed remorse and a sense of reformation and the jail advisory panel must weigh these issues when deciding a plea for pardon.

“It is interesting that all 11 convicts in the Bilkis case reformed at the same time, expressing simultaneous regret, which they actually did not as they came out and claimed political witchhunt. They were also garlanded,” Vrinda notes with lament, putting a question mark on the credentials of the jail panel (featuring ruling party MLAs and government servants) that recommended the remissions which the state then granted.

To researchers like Padma Bhate, Sangeeta Rege, Sanjida Arora and many others of the Centre for Enquiry into Health and Allied Themes (CEHAT), who worked painstakingly for years to put together India’s first work documenting the impact of sexual assault on survivors, this remission is a body blow to India’s post-Nirbhaya response to rape crimes.

Bilkis is just one of the many survivors lost in the dark alleys of trauma, seeking to regain control over their lives and bodies, fatigued by a system that refuses to help or heed.

“Undo this harm... Give me back my right to live without fear and in peace. Please ensure that my family and I are kept safe.... No one enquired about my safety before taking such a big and unjust decision,” was all Bilkis prayed upon hearing that her rapists, her neighbours, were back to freedom.

The researchers tracked 728 survivors who had reported at three government hospitals in Mumbai over seven years. They were able to contact 181 of them, out of which only 66 agreed to talk. Of these, the number of children and adults was equal and shockingly, the age of the survivors ranged from six months to 48 years, with 68 per cent victims less than 18.

The team discovered that in 95.5 per cent (63 out of 66) cases, the perpetrator was known to the survivor and included the child’s father, a family member, even a neighbour.

The abuser profile, study counsellors say, showed 85.4 per cent were adults with more than half employed at the time of the incident and in nearly half the crimes, the abuser was 10 years older than the survivor.

The report has filled gaping holes in the survivor testimonial landscape of India and shed light on how criminal law amendments of 2013 in the aftermath of the 2012 Nirbhaya gangrape have mattered little.

Commenting on the path-breaking work, Gita Mittal, former Chief Justice of Jammu and Kashmir High Court, says, “The report highlights the negative response from the formal systems which far outweighed any positive response, completely discouraging the survivor and her family from seeking help at any level. The delayed and reluctant response from the police aggravated the distress of the victim, leading to absence of follow-up. The victims appear to have reported the failure of the judicial system to provide expeditious prosecution, besides exposing them to unstable public prosecutors and subjecting them to trauma at the hands of the defence.”

Even the legislative mandate that the trial should be completed within two months has not been followed and survivors have not availed the benefit of compensation schemes many states rolled out in attempts at restorative justice.

Add to this the fact that India has no laws to guarantee victim protection except the hope that cops will protect the survivors should they make an application about threat to life. Even that is not happening, as CEHAT investigations reveal.

Of the 66 rape survivors the researchers engaged with over the years, 42 reported facing harassment from the perpetrators and their families.

The police took cognisance only in two cases, often dismissing survivors’ fears as a “waste of time”. It was this very fear for her life and person that Bilkis Bano cried out aloud on Independence Day.

Under Maharashtra’s Manodhairya scheme drafted after 2012, all rape survivors can avail financial assistance of Rs 1 lakh and in special cases Rs 10 lakh for rehabilitation. Of the 66 survivors documented by CEHAT, 47 were eligible as they had filed the FIR after October 2013 but only seven got the benefit. Other states also have similar schemes but the uptake remains low.

Post the changes in criminal laws after the Nirbhaya gangrape, National Crime Records Bureau reported 56.3 per cent increase in the number of complaints to the police from 2012 to 2016. Many procedural changes were brought to enable the survivor’s fight for justice but victim-blaming attitude continues across all sectors of interface — from police and hospitals to the courts.