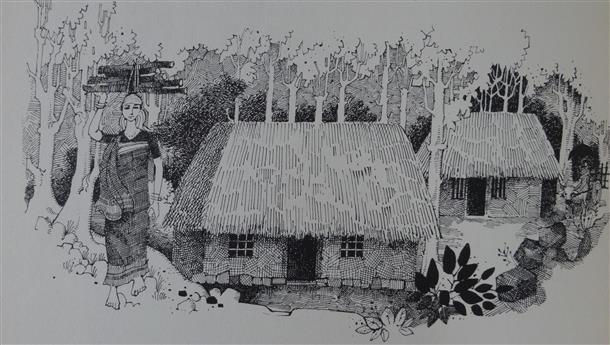 Simple living at the edge of the forest. All images are by Mario Miranda.

The child’s eyes opened. The world happened to them. He had been asleep, for him through centuries, in actual time through a few hours, since his mother had huddled him into bed: a bed made of animal skins, with an earthenware headrest which he found hard but comfortable…

There was the garden (of GVK Rao’s home), dimly to be discerned outside, sun and trees and flowers. Not far away, certainly, was a temple, not far away was a factory, not many miles further, a dam. This was Karnataka, light, shadow, and time lying in each other’s arms and forming a state which had open eyes. — Dom Moraes

Of the many times that I have been in Bangalore — now the obligatory-sounding Bengaluru — at least three times I have had the pleasure of meeting Sardar Chiranjiv Singh: either presiding over a lecture of mine, introducing me, or sitting in the audience. This ascetic-looking, ‘gentle and erudite’ civil servant — the widely cited description is terse but absolutely apposite — had served the state of Karnataka for many decades and soaked himself in the history and culture of that region. The last time I saw him, he kindly handed me a copy of a khadi-bound book by Dom Moraes — The Open Eyes: A Journey through Karnataka — which he evidently had had much to do with in publishing in 1976 as Director of Information of the state. I was eager to acquaint myself with this handsomely produced volume, but decided to do it after getting back, rather than during the flight homewards.

That is exactly what, to my delight, I did. Even a casual browsing had told me that the book needed engagement and that a sarsari reading, as we call it, would be less than fair both to the book and to myself. For one thing, I quite like ‘journey’ books; for another, two very distinguished names — Dom Moraes and Mario Miranda — had worked together on it, and that made it irresistible. The much honoured Mario, whose work one had seen as a college student, was a legend, with his witty, almost insanely funny, cartoons consisting of the foibles of ordinary people in crowded situations — the ‘who knows who, who’s watching who, who’s annoyed by who, and who’s enamoured by who’ kind. He was everywhere, in newspapers, magazines, books, getting us to keep company with two of his unforgettable characters: Miss Nimboopani, and Miss Fonseca. Both, curvaceous creatures, created ‘in a frame of high and mischievous intention’. Dom Moraes, distinguished poet, son of Frank Moraes, who had edited The Times of India for years, was not equally well-known perhaps, but certainly was equally distinguished: a foundational figure in Indian English literature, educated in England, 30 books, Hawthornden Prize winner, editor of different magazines in London, documentaries for BBC, war correspondent, and husband of the lovely Leela Naidu for many years. How the two Goanese, who of course knew each other, came to collaborate on this project — one with his words, the other with images — I do not know, but it would be a fair guess that it was at the asking of the lately established Karnataka government. They were invited to travel through the state with eyes wide open.

At some place in the account, Dom Moraes makes light of his work — there I was, he writes, “wandering lazily about scribbling in a notebook’ — and so did Mario, using his usual nib pen to draw, not ‘sardonically’ for a change, but precisely, with a very keen and serious eye: sketches of temples and dams, of people at work and people at leisure, town scenes and persons living singularly simply in forest huts. There is no raciness in the account, but a swift change of scenes: the two, with Leela Naidu sometimes in the group, now being led through a factory, now listening to the legend of Rani Chenamma of Kittur; at one time a hilarious school inspection, and at another, with great respect, a meeting with the music great Basavaraj Rajguru. The prose does not flag at all, not at any point, for everything is viewed with deep interest and described with poetic flair. Consider this description of a swaying bridge “slung over the belly of the river, where the brown water whitens as it roars around rock… A little below the bridge, the river seems to break into half, drawing a sharp breath before it thunders down a brown stairway of rock, to burst into foam at the foot, and then, drawing a deeper breath, spread away slowly into a flat horizon. Water-spray fills the air at the foot of the falls. The rocks beneath look as though they had been carved to a specific pattern by people, but it was always the water which was the sculptor”. This is the strain that one hears everywhere. At temples like Badami, and Pattadakal, Dom sees “the pores of the statues inhale the dry sunlight;” in the sandy soil of one place, groundnuts grow in lush abundance because “groundnuts, unlike religions, do not need to put down deep roots”. When we are at the Hoysala site of Halebid, we see through Dom’s eyes that “the stonework in some places is as delicate as lace… The women shown in the sculptures have full, round breasts, ornamental hairstyles, tiny waists, shapely hips and thighs, an excess of adornments and a deficit of clothing”. Landscapes roll by, temples — Belur, Shravan Belgola, Somnathpur — flit in and out, and distinguished, very distinguished, people are met: General Cariappa, Girish Karnad, Shivram Karanth, AK Ramanujan, MS Sathyu, among them.

This is the way this enchanting travelogue proceeds: information, history, delight, analysis, surprise, the warmth of humanity, all mingling together. But all the time, while reading it, one is also irked by the thought that Karnataka has changed, not always for the better, from the times when it was written. So, when one reads it today, this work is unlikely to serve as a guide to the state, but that does not keep it from yielding delight of a different kind: that of the chiselled words in which it is written on the one hand, and of being able, at the same time, to get close to the hearts and minds of two very gifted people who put it together.