India is not self-sufficient in the production of pulses & vegetable oils. It imported 56-66 lakh tonnes of pulses annually during 2015-17. The imports came down to 24-29 lakh tonnes during 2018-21 due to a special drive for increasing production. Around 150 lakh tonnes of vegetable oils were imported annually since 2015. There is a strong need to increase area under these crops. To maximise gains from pulse-oilseed cultivation and processing, farmers need to venture into retail marketing too. 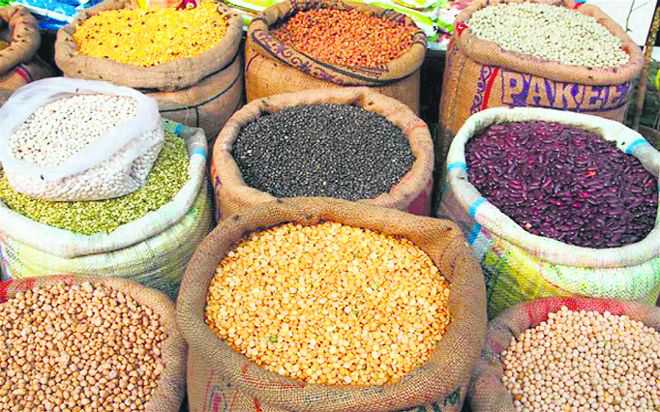 A basket of crops was cultivated in Punjab up to the mid-1960s. The important ones were cotton, maize, rice, groundnut and bajra in the kharif season and wheat, chickpea, rapeseed and mustard in the rabi season. However, rice-wheat cropping system emerged as the most important system in the 1970s. The adverse effects of this change on agro-ecology, particularly the depletion of underground water resources, brought into focus the need for diversification of rice-wheat system in the mid-1980s. 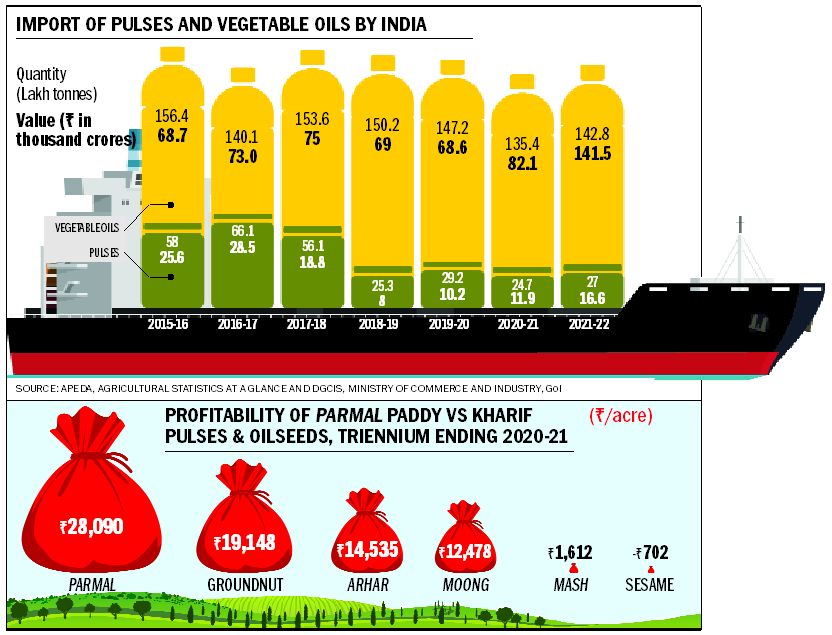 In recent years, another factor — demand — has come up. The national foodgrain production has increased from 820 lakh tonnes (1960-61) to 3,086 lakh tonnes (2020-21). There are indications that the assured procurement of foodgrains at MSP for the public distribution system may not continue in future.

The depletion of underground water resources, however, continues to be the driving force for crop diversification. The main focus is on reducing rice acreage as it is a water-guzzling crop. Also, rice cultivation adversely affects soil health and its straw management is challenging. Many policy-makers and scientists advocate pulses and oilseeds as replacements for rice because of their large domestic demand and low water requirement, ignoring the comparative economic returns.

Prospects of shifting rice area to pulses and oilseeds

(1) The high and stable profitability from parmal is the major factor responsible for the rapid expansion of its acreage. In contrast, the profitability from pulse-oilseed cultivation is distinctly lower even if sold at MSP, though there is no certainty of that, and farmers may get a price below MSP. This creates a strong impression that it is very difficult to replace parmal even if pulses and oilseeds are procured at MSP. But the encouraging response of the farmers to the recent decision of the Punjab Government to assure MSP for moong has raised the hope for enhancing area under not only moong, but also groundnut and arhar.

(2) India is not self-sufficient in the production of pulses and vegetable oils. It imported 56-66 lakh tonnes of pulses annually during 2015-17, costing Rs 18,000-28,000 crore. However, the imports came down to 24-29 lakh tonnes worth Rs 8,000-17,000 crore during 2018-21 as a result of a special drive for increasing their production. Further, around 150 lakh tonnes of vegetable oils worth about Rs 68,000 crore to Rs 141,000 crore were imported annually since 2015. Evidently, there is a strong need to increase area under these crops in the country. Just to meet the demand in Punjab, an area of around 6 lakh ha is required under each group of pulses and oilseed in kharif and rabi seasons.

(3) To maximise gains from pulse-oilseed cultivation and processing, the farmers need to venture into retail marketing too.

The identification of niches cultivating arhar, moong and groundnut and providing the farmers quality inputs and technical and marketing support should help in enhancing returns from their cultivation. During TE 2020-21, arhar was cultivated on 2,000 ha in the state, 30% (600 ha) of which was in Ludhiana district, and moong on 2,800 ha, 25% (700 ha) of which was in Fazilka district. Groundnut cultivation was confined to Hoshiarpur district (1,500 ha), 50% of which was in Bhunga block. A special project should be launched for arhar and moong (also groundnut, if resources permit) in the blocks with the highest acreage to showcase the potential of these crops. The state should come forward to:

(b) Insure the crops against insect-pests, diseases and vagaries of the weather as the performance of these crops is not as stable as that of rice

(d) Arrange custom hiring services of an agency (e.g. PAU, Markfed, PAGREXO) for agro-processing. Initially arhar and moong crops may be covered under the special programme as these need only cleaning and packing. As groundnut needs a seed decorticator for shelling, it may be included as and when resources permit. The performance should be evaluated after one-two years and depending on the results, provision of the machinery may be considered. The expenses on seed and primary processing may be subsidised. The insurance cover can be provided free of cost.

PAU has made efforts to demonstrate the utility of establishing the value chain. PAU supported farmers in some villages of Jagraon in Ludhiana district during 2019-21 by providing services for primary processing and retailing of summer moong with positive results. The farmers earned higher than selling the raw produce at MSP and the consumers got good quality moong (the packets were labelled for nutritional value). PAU also undertook a pilot project on establishing a value chain mechanism for kharif mash during 2020, enabling the farmers to earn ample profit in addition to the generation of farmgate employment. An intensive programme to create awareness and motivation is going to be the lifeline of the project. The financial support will act as a catalyst.