Adjara, Svaneti and the black sea coast of Georgia 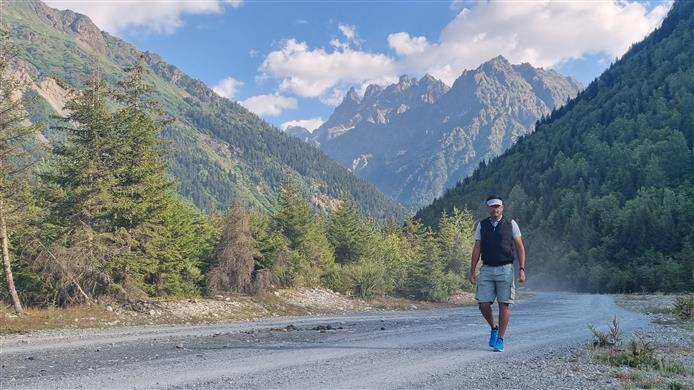 Mount Ushba is an immense peak straddling the border between Russia and Georgia, rising dramatically high above the Mestia valley

“Chkhaveri, Khvanchkara- Racha… JOSEP STALIN…” Thundered Lado wildly gesticulating to the still green unripe fruits of his grapevines. Puzzled by his sudden fervour, my friend joined him meekly trying to humour. "Yes, we like Stalin's wine… we are communists..." Now it was Lado's turn to be bewildered. "Communists...?" ‘How come!’… He seems to wonder. 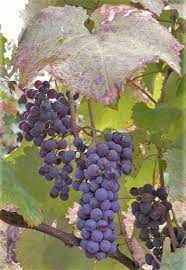 Lado took us to his cellar and started the customary wine tasting all earnest. He made us savour a dozen or so varieties of white, red, dry, semi-sweet wines of varying ages, each one accompanied by a high pitched spiel in Georgian. What followed was a feast of roast chicken, salads and a variety of local Khachapuri. Lado’s family sat with us and tried to engage us in conversation. Language was never a barrier. At times he sought help from his daughter on his mobile to act as a translator. Happy to make friends with a nice man and family from this foreign land, we left promising to return in a week's time.

Lado Shavishvili's farm is on the little Caucuses 50 km east of Batumi. It is by a small stream, a tributary of Coruh river that originates from mountains in Turkey and enter Black Sea south of Batumi. Turkish border is a few kilometers south. Life seems to go on in sedate pace at these lands which can claim to be the cradle of modern civilization. We caught Lado by surprise. He was having lunch at his yard with his family when I intruded unannounced. He looked embarrassed in his bare back. A spirited man, soon he made us welcome though we did not have a common language to communicate. He gave instructions to his wife and daughter in law to prepare us lunch and promptly took us for a tour of his farm. 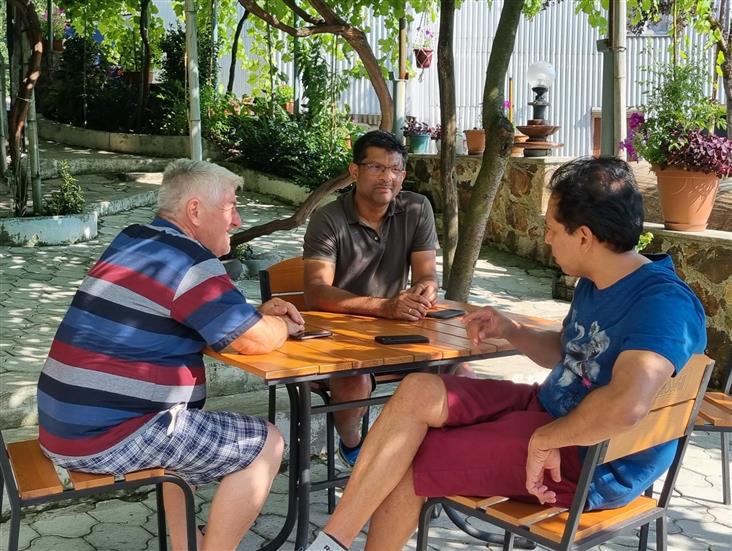 Josep Stalin was born in Gori, some 250 km east of Lado's farm. I had been to Gori last time Georgia and had placed a rose at Stalin memorial. A colossus of modern times, Stalin is the native son who won the war and gave Georgia its new identity. Men seem to favour him here. Those from the west may say, ‘so was Genghis Khan in Mongolia or Timur for Uzbeks’. Then, we need not always observe colours through prism held up from the west. ‘Chkhaveri and Khvanchkara are the wines Stalin favoured’, says Lado. Or that is what we could make out. It is a fact that Stalin took pride in his native wines and had served the choicest at the legendary Yalta conference. 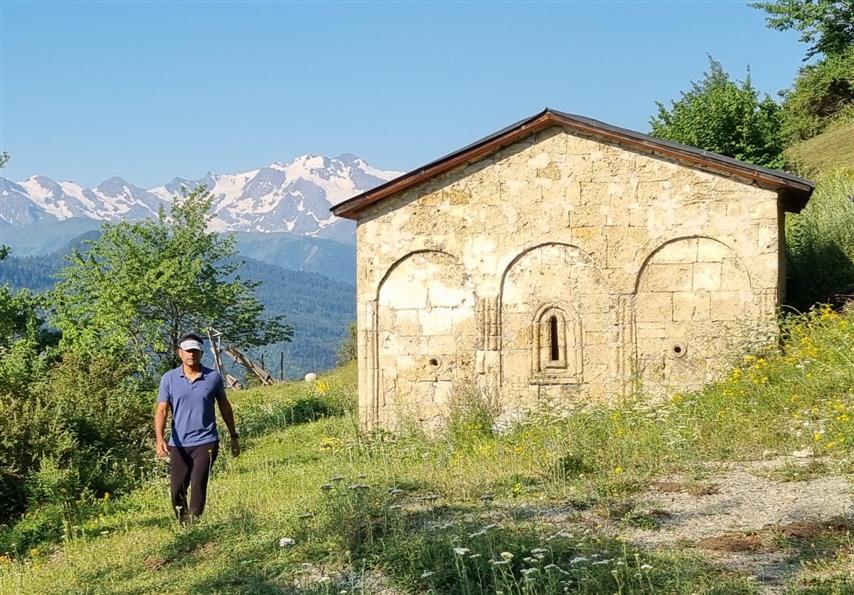 Chkhaveri and Khvanchkara wine Chkhaveri, dark pink-skinned grape when ripe, is one of the most ancient grape variety of Georgia. Winemaking in Georgia dates back 8000 years. Grown in south western provinces along the valleys of lesser Caucasus near Black Sea coast, late ripening Chkhaveri with its high acidity, is a versatile grape that produces a wide variety of wines that are dry or semi-sweet, still or sparkling and can be rosé, white, amber or red. Khvanchkara was one of the most popular wines in the Soviet times. True Khvanchkara wine is a blend of two indigenous Georgian red grapes sourced only from the AOC of Khvanchkara located in the Racha district on greater Caucasus Mountains of the north. The naturally semi-sweet wine from this tiny remote region has a cult status and was sold at a premium. Relaxed regulation of post-soviet times resulted in a number of imitations eroding trust on authentic Khvanchkara. Khvanchkara now is gradually regaining favour amoung wine aficionados, thanks to the ardent efforts by government since the Rose revolution.

We had flown directly to Batumi with ‘Fly Dubai’ which flies in direct from Dubai every alternate day. The idea was to spend a few days going around this black sea retreat and drive to Mestia, 250 km north on the greater Caucasus on Russian border. My friend and Family had joined us from Qatar. Our last time around here was in a December. The high Road to Mestia from Zugdidi was under a thick carpet of snow then and we had move back after going half way. Now in the July heat, it is a five to seven hour drive from Batumi to Mestia. True to our wont, we rented the smallest and cheapest Mitsubishi sedan from SixT car rental, Batumi. Car was dropped to our hotel. We lost no time to set out to the snow-capped mountains.

Birth of a nation 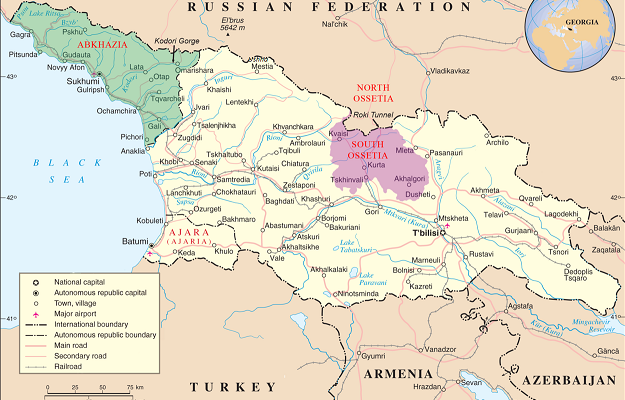 Hemmed between two giant nations, Georgia struggled to establish its identity in the immediate aftermath of fall of USSR. Caucasian southern USSR with a number of fiercely proud and independent minded tribes, descended in to anarchy in the early 1990es. Bloody wars gave birth to three new transcontinental nations namely Georgia, Armenia and Azerbaijan. Though regional wars with direct and indirect support of Russia severely undermined the stability of Georgia, situation started to improve with Rose Revolution of 2002. Extreme confrontations on Abkhazia and South Ossetia subsided by 2012 with internationally brokered peace. These regions, though nominally with in Georgian national boundaries, are independent with Russian recognizing their autonomy. Georgia has now severed all diplomatic relations with Russia. They have thriving military for a small nation and strives to fend for itself.

Mestia of the Svans 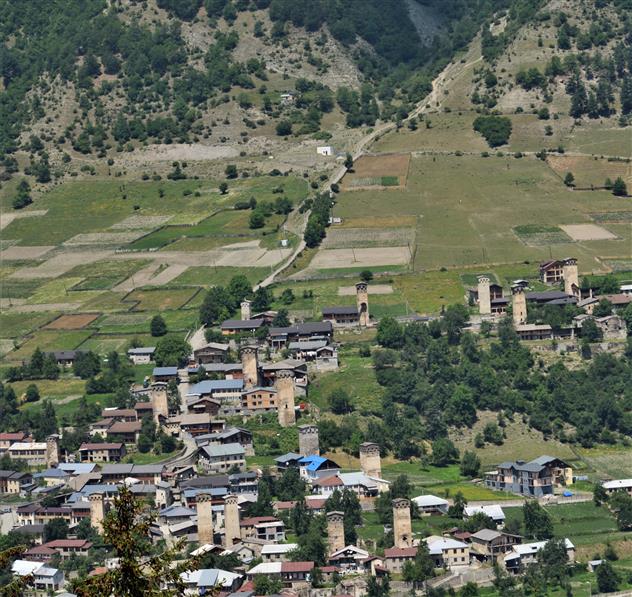 Mestia is the major town and capital of Svaneti, a landlocked province of Georgian Caucasus. It is the land of Svans, one of the many tribes of these mountains. Svans, though Christianized from the 5 th century and were part of many famed empires, remained isolated till recently. These hardy men of the mountains were shorn of many resources like salt, thanks to the forced isolation. Deprivation had made inter-clan violence very commonplace. The orthodox Christianity they follow still retain many traditions of bygone animism and violence. It was the vigorous road and other infrastructure development during the Stalin era that helped them come to mainstream.

A curious feature of the local architecture is the towers that go over 50 ft high from every old stone house scattered around the Mestia valley. Giorg, a local shepherd I met on one of my treks early morning, tried to explain that it has something to do with vendetta that runs between families. While they looked like high chimneys, they were closed at the top. Giorg and I passed by a smallish stone church hidden in the woods by the hill. It looked sturdy though a few centuries old. They use this church at the times of war when valley will be occupied or threatened. Russia lies less than 10 kilometers across the mountains but the road crossing there is permanently closed now. There are brown bears and wolves in these forests. “But bears come down here only in high winter…” Giorg reassured me as he left with his cows. I thought for a moment and hastened to a speedy retreat. 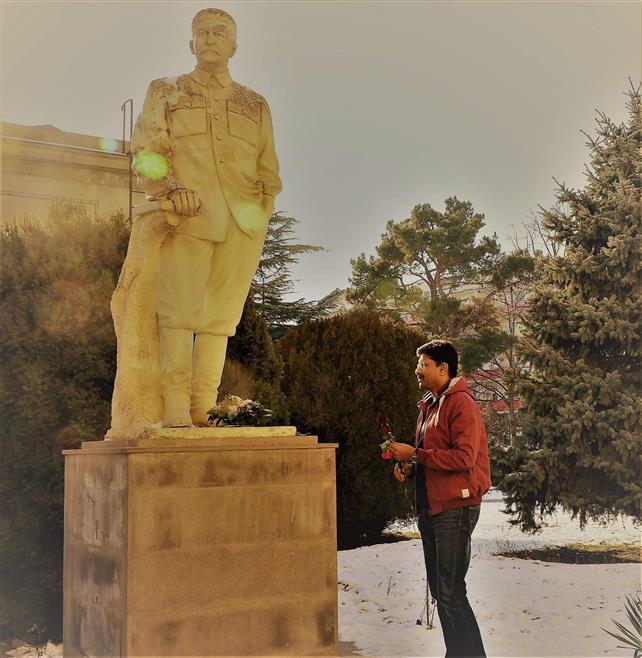 Coming down hill, I met a twenty something beautiful girl assiduously trekking up. Sun was hot by now. Christine is from Germany and is following the trail to the Koruldi lake, actually a puddle beneath the peaks. Trail was marked by some obscure red and black marking on a tree or a stone hedge. I thought for a moment if I should turn back and trek to the Glacier with her. High towers of mount Ushba beckoned invitingly. Alas… It is not to be! I was already out of breath and half dead from the efforts from pre-dawn. Saying goodbye to Christine, I came down to an inviting breakfast of cheese filled thick Kachapuri and honey. Our landlady has prepared omelets and strong coffee to go with it. God bless her!

Our days there in Mestia were unfortunately hottest few days of this year. Hours moved on slowly. Someone had died and the mourners moved around the local cemetery clad in black. Ladies of nearby houses were all there in our homestay’s lawn by late evening, sharing little gossip and wine. Our women joined them. As sun came down, menfolk too joined for some good natured banter with a beer or two. There was a family who had come down from Tbilisi. George is hair stylist and has a thriving business there. Young Emil, his fifteen year old son, spoke English and we sat there chatting this or that. He aspires to be a chef; he told me. Life is good now… George patted his son lovingly with pride. 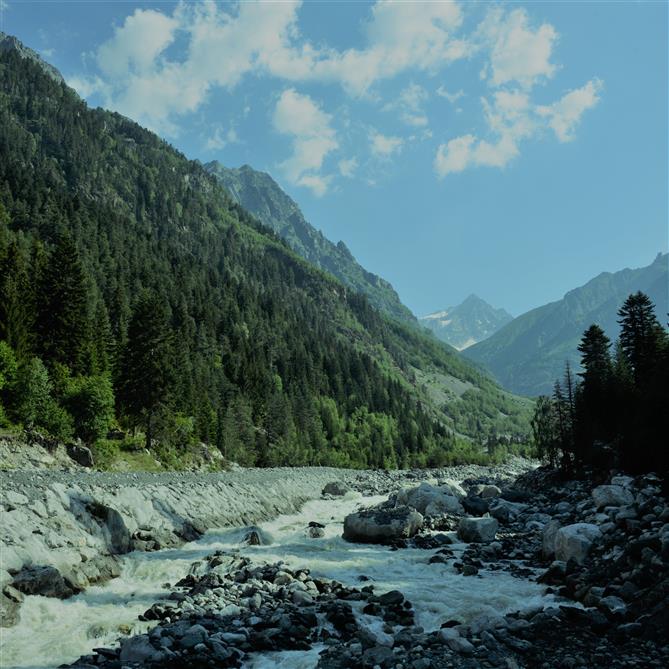 Mount Ushba is an immense peak straddling the border between Russia and Georgia, rising dramatically high above the Mestia valley. Chalaadi glacier originating from the peak, gives birth to Mestiachala river, gushing by in the gorge skirting Mestia town. Trail leading to the glacier starts at the relic of a hanging walk way over the roaring mountain stream. A few grazing cows looked up on cue as a wolf howled from a distance. I stood there alone entranced. Deep blue sky contrasted the pure white snow on the high horizon. Silence reigned.