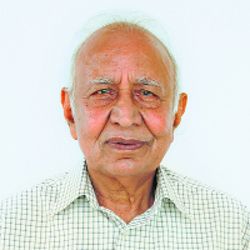 My romance with newspapers started 80 years ago when I was about nine years old. We were living in Peshawar, now in Pakistan. The medium of instruction in my school was Urdu, even as Hindi was among the subjects taught. English was taught only from Class VI. So, I read various Urdu and Hindi papers regularly in the public reading room. The Tribune was then published only in English.

After Partition, we migrated along with others to what was then called East Punjab. The Tribune shifted from Lahore to India. I joined college at Jullundur (Jalandhar) in 1948 where I started reading The Tribune. Ever since then, reading The Tribune daily has become a sort of addiction. I have been reading it regularly except during brief periods when living outside Punjab. I have subscribed to four daily English papers, but The Tribune is the first paper I read thoroughly for its unmatched coverage of news from Punjab, Haryana and other states in the region.

A major advantage with The Tribune is that it is run by a Trust and is not owned by any business or industrial house. It can, therefore, present news and views without being influenced by the interests of its owners. It has always had eminent persons from public life among its trustees. It has also the tradition of publishing news only after proper verification. You can, therefore, depend on it for authenticity of its news. It presents the news in a sober, balanced manner and is not given to sensational headlines. It also presents them in a reader-friendly way by grouping those pertaining to Punjab, Haryana, Himachal Pradesh, J&K and those relating to national affairs, world affairs, sports, arts etc. on separate pages. Its language is simple, easily understandable by the common reader. It has a secular, liberal and democratic outlook and scrupulously avoids encouraging violent or sectarian activities.

The paper, like most others, is also published online. In this format, it is particularly useful while staying outside Punjab and it is quite popular with Punjabis living abroad. I recall during late 1999, when we were in Switzerland for a short stay, I looked forward to reading the online edition of the paper every day to get the latest developments of the Kargil war.

Since the paper has a high circulation among English newspapers in Punjab and Chandigarh, it has been the obvious choice for giving advertisements both for personal purposes and for an NGO of which I have been the Chairman or Member Director for the past 18 years. Those have always received good response. A few articles which I wrote for the paper have also been well received. The paper is read regularly by most public men and officers in the region. The news and views published in it, therefore, exercise considerable influence on policy-making at the state level in the region and the grievances or shortcomings pointed out by it receive prompt attention from the authorities.