Arpana Caur on Partition & art: Bridge across the river of pain : The Tribune India

Arpana Caur on Partition & art: Bridge across the river of pain 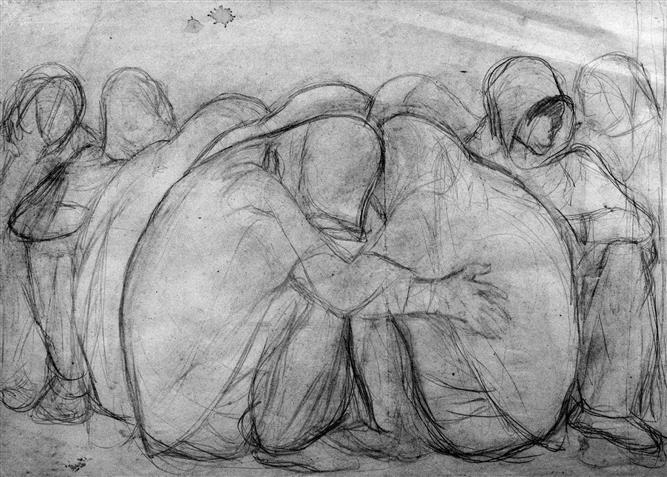 Parasher’s Small Comfort, 1947-1950, is one of the many poignant sketches from his time spent at the refugee camp. courtesy: Parasher archives

My maternal grandfather turned grey overnight, my mother tells me. She was 13 then. She saw her father quietly retire to bed with a black beard. Next morning, it was white.

Darji had a six-storey house-cum-clinic on Lahore’s Chamberlain Road for doctors. The house was tucked away behind the clinic and freedom fighters would often meet there, some even taking refuge. Everyone in the family wore khadi, even dupattas.

Darji, Dr Makhan Singh Bajaj, and the rest of the family had a passion for the mountains. So, every summer, two months were spent mostly at Pahalgam in Kashmir. There were no hotels and the family would carry tents, a cook and provisions. That particular year, when Partition was announced, Darji was holidaying in Shimla with my grandmother, mother and uncle.

His old parents and in-laws were in Lahore and Darji insisted on going back to get them, a suicidal mission, with his friend Ujjal Singh (Khushwant Singh’s uncle), who had told him: ‘I will die with you.’ They reached Lahore with the help of the Army and a Muslim friend, also a doctor, from the neighbourhood and found the house surrounded by a mob. All he chose to bring back along with the four old people was Guru Granth Sahib on his head, which mother and I read every day. When India turned 50 in 1997, I painted a 5’x6’ canvas of this, with Madhubani lions in the background, because only Singhs (lions) risk their lives for others.

Lahore’s beauty and culture and the nostalgia for it were part of everyday conversations in our house. And so were trains laden with bodies, which became part of my childhood dreams. Later, Lahore would often enter our lives with the stream of writers and poets who were always welcome. Among them was the great Faiz Sahib, whose handwritten letter to me I found recently, 43 years after it was written! He had carried in colour eight of my paintings in ‘Lotus’, a magazine of Afro-Asian writing published in exile from Beirut. The letter said the paintings were appearing in the forthcoming issue. It remained buried in an old sketch book and surfaced just recently.

Colour printing was expensive and printing was done from transparencies in those days. After a couple of years, Faiz Sahib asked Kartar Singh Duggal to bring him more transparencies from me. I gratefully gave the box to Duggal Uncle, but by the time these reached him, Faiz Sahib was gone. Our link has, however, remained through his brilliant artist daughter Salima Hashmi, whose powerful painting on Partition hangs in Bradford Museum, UK, next to my ‘Sohni Mahiwal’ triptych. In 1986, when I got my Triennele Gold Medal for a 1984 Sikh massacre painting, ‘World Goes On’, she had brought to India 40 Pakistani artists, who burst into our place to hug me and smother me with kisses and laddoos. We were one and the same in spirit.

My mother, writer Ajeet Cour, wanted to bring the Lahore of her childhood alive. In 1987, after a year-long battle for visas, she hosted at her own expense the first-ever Indo-Pak Writers’ Conference with 10 Pakistani writers, including Intezar Hussain, Ahmed Faraz, Afzal Ahsan Randhawa, Sibtul Zaigam, Fahmida Riyaz, Fakhar Zaman and Akhtar Hussain Akhtar. At the three-day conference in Triveni Kala Sangam in New Delhi, there was no room to sit — 400 people were attending the meet at the 250-seat auditorium.

Mother continued with her bi-annual SAARC Writers’ Conferences (there have been 61 so far, with Pakistan absent for the last five years). When writers and artists meet, they are one, only one, no scars remain, and this is the only way of healing wounds, as her journal ‘Beyond Borders’ and her 48 publications of SAARC poetry and fiction have expressed. When she took the first delegation of Indian writers, including Kamleshwar, Joginder Paul, Manohar Shyam Joshi, Shamsur Rahman Faruqi and others, to Pakistan for a conference, 1,000 people came to welcome them with dholaks and garlands. Salima Hashmi was one of them. There was so much hugging happening that the security forgot to stamp the visas. It was later done at their hotel.

Another painting I did on Partition was of those blood-soaked trains from ‘Train to Pakistan’, which I have read more than once. In this 8’x3’ diptych, Bhagat Singh and Gandhi blend, for though their means were opposite, they shared the same dream. In the background, I have once again used the Madhubani motif of lions, which both were, as was Udham Singh, whom I painted in 1997. This painting, called ‘The Great Divide’, also had weeping Madhubani birds.

Fourteen years ago, Guneeta Bhalla came from San Francisco to interview my mother for her 1947 Partition Archive. A few years later, Kishwar Desai and her daughter Mallika came from the Partition Museum in Amritsar. They saw my ‘1947’ terracotta and wanted it for their Museum, which I readily donated. I’m grateful it hangs there among the works by Satish Gujral, Pran Nath Mago, SL Parasher and Krishen Khanna, the first Indian artists to paint Partition with pain and passion, all of them seniors I deeply respect.

Mago Sahib was 24 when Partition happened and this was naturally reflected in his work. He was a contemporary of MF Husain, FN Souza and Dhanraj Bhagat, but it was his work that recorded the trauma. Similarly, Parasher, aged 43, moved to India with his family, leaving behind his large body of work. As a supervisor at an Ambala refugee camp, he did a series of sketches and sculptures of what he witnessed.

Gujral’s works on Partition are extremely moving and my favourites among his large body of work are influenced stylistically by Mexican Muralism. His contemporary Krishen Khanna, in his nineties now and still active, painted the trauma of exodus with despondent frenzied figures, including cattle in movement.

In recent years, Nilima Sheikh, Nalini Malani and Reena Saini Kallat have painted Partition that their families had experienced.

Across the border, Salima Hashmi has powerfully painted the divided subcontinent. So has Jimmy Engineer in the famous ‘Refugees Resting under a Tree in 1947’. He says these paintings came to him in his dreams and caused him sleepless nights. Through these paintings, he wanted to remind people that these terrible things should not happen again.

Amid the culture, language, songs and love stories that we share, one wonders where does Partition figure? A line on paper that an Englishman drew erupts like a bleeding wound from time to time as some people want to keep the embers burning so that more pressing questions of hunger and poverty are pushed to the background. At 67, I still cannot sit through a performance of Toba Tek Singh, and rush out of the theatre. Or read Manto without crying.

When Hamid Mir calls my mother ‘Ammi’, as do the many others who miss the warmth of her conferences, everything melts away into a timeless ‘jhappi’ (embrace). A bridge across the river of pain.