Ashis Nandy: It’s very difficult to go back to pre-violent days after you’ve once participated, killed

Political psychologist Ashis Nandy, a pioneer of Indian critical thought, has over the years delved into areas other than routine academic concerns. Honorary Fellow at Centre for Studies of Developing Societies, New Delhi, Nandy is currently working on genocide. In an interview to The Tribune, he speaks of the psychology of rioters, the anatomy of violence and challenges of identity politics. Excerpts: 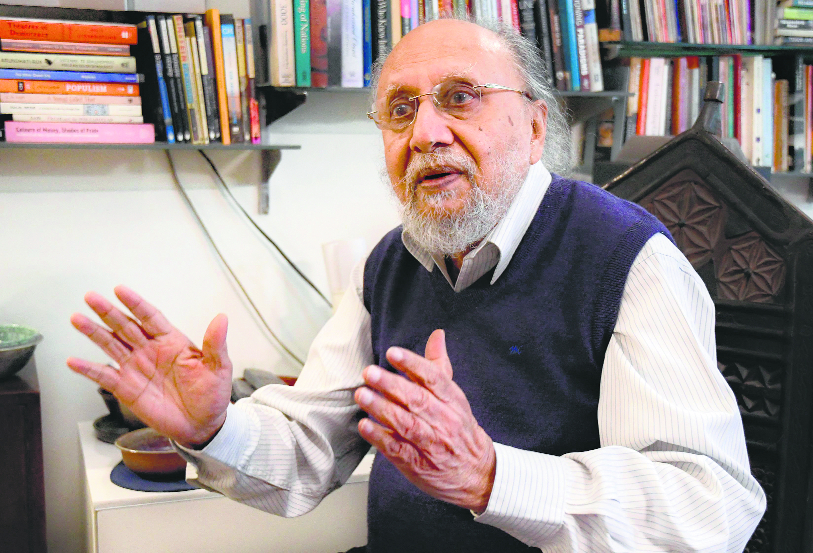 Delhi just witnessed a riot. What makes normal people kill and go back to being normal again?

Two kinds of people participate in riots. The first are local miscreants who often lead the riots. The others are ordinary citizens mobilised through the media and election campaigns and momentarily swayed by that. For local thugs, it’s about access to easy money. But for ordinary citizens socialised into violence, it’s about coming back temporarily as local heroes. In the long run, however, it’s a very different story. Killers can never go back to being normal again.

The person most famous for his “hard work” during Gujarat riots, Babu Bajrangi, is now a schizophrenic. In case of the Partition riots, we managed to interview seven killers. All of them had mental health problems and none was happy or proud of what they had done. We interviewed one of the killers of Gandhi, who was jailed for 18 years, Madan Lal Pahwa. In the beginning of the interview, he was trying to live up to his image of a hero who got rid of one of the greatest enemies of Hinduism. His wife told us that he did it for the country. But by the end of the interview that spanned three years, Pahwa’s tone had completely changed and he said he was a humanist now like Gandhi — the man he killed.

The fact is, it’s very difficult to go back to the pre-violent days after you have once participated and killed because you were not brought up or socialised to killing. You are a normal citizen living with a normal family which comes to know of your actions and you have to live with that. You may say it was a nationalist act, but when the chips are down, mass killers break down while describing how they killed men, women and children.

The Indian record, as also South Asia’s, is that riots primarily take place in cities because of the anonymity factor and because people don't know each other very well. Once prosperity comes, people become atomised, more isolated and individualistic.

Hate stays, does not subside after polls

It is difficult to know how much of the media is actually interested in fomenting the violence and how much of it is about political campaign to discredit the other side. Many people think hate will subside automatically once the elections are over, but that never happens. Hate stays.

Hinduism turned into word of fear

Till now, I think the time was propitious in India for identity politics to be used creatively. But now they have turned Hinduism into a word of fear even though Savarkar himself clearly said Hindutva is not Hinduism. Savarkar was very much an atheist and willed that he must not be given a Hindu funeral.

What provokes normal people to kill?

They are mostly moved by propaganda and fake news and are often very angry that the other side is killing and we are not killing enough.

So media has some role here?

Of course, but it is difficult to know how much of the media is actually interested in fomenting the violence and how much of it is about political campaign to discredit the other side. Many people think hate will subside automatically once the elections are over, but that never happens. Hate stays.

Riots don’t usually happen in modern societies. Why are we so pre-modern?

Modern societies have seen riots. The US saw a lot of riots, France also did. Delhi riot is very much a modern riot. But there’s a difference. Riots in the US have predominantly been perpetrated by the blacks and the society there has known that rioting is a response to the way blacks have been treated. In India, that kind of awareness hasn’t come. Muslims are poor. They are discriminated against. They don’t have the kind of autonomy they used to have before Independence when most Muslims were part of the peasantry. Now Muslims are artisans or landless labourers.

How does a cosmopolitan city like Delhi, a melting pot for cultures, become fertile ground for riots?

Partly because of the influence political leaders exercise in the way they portray people as enemies of each other. Political leaders certainly have a role here. They have come to feel that if they don’t take some criminal actions in politics, they cannot survive. Particularly those who don’t have a strong base use propaganda and instigation as tools and such people are emerging as important leaders.

So there’s no surprise in cosmopolitan Delhi becoming the location of a bloody riot?

Not at all. On the contrary, the Indian record, as also South Asia’s, is that riots primarily take place in cities because of the anonymity factor and because people don’t know each other very well. Once prosperity comes, people become atomised, more isolated and individualistic. Increasing modernisation leaves you more and more as an individual. It weakens communities. The modern state always tries to weaken communities because it feels communities are a handicap to modernisation.

You spoke of uniformity. Is India moving towards Savarkar’s model of a nationalist nation-state?

Yes, you can say that. Savarkar, who was deeply influenced by the western model of the modern nation-state, is now the unofficial father of the nation. Gandhi is a kind of stepfather of the Indian nation-state.

How do you see Delhi riots from a Hindu versus Muslim perspective since it wasn’t one-sided?

Yes, it was from both sides. Prima facie it was a very sad thing as it came after Muslim women sat in protest at Shaheen Bagh assuming leadership of protests against the Citizenship (Amendment) Act. Here were Muslim women talking of peace, the Indian flag and the Indian Constitution. This was a major civilisational advancement for India. It was stupid that the government saw Shaheen Bagh as an incipient opposition of a new kind which needed to be broken at all costs. It seems they wanted Muslims to behave like gangsters so that the Hindu-Muslim divide could be accentuated and Hindu vote pocketed.

To put it sharply, identity politics can be for the good or for the bad. It is like science. Science can be for good ends and bad ends. Till now, I think the time was propitious in India for identity politics to be used creatively. But now they have turned Hinduism into a word of fear, even though Savarkar himself clearly said Hindutva is not Hinduism.

Savarkar was very much an atheist and willed that he must not be given a Hindu funeral. He did not give his wife one despite Hindu Mahasabha women sitting in dharna before his house. As far as his body was concerned, Savarkar willed that it must be carried on a mechanised vehicle and not on somebody’s shoulders.

Is identity politics here to stay?

Should public intellectuals like yourself work to break all identities?

Identity, particularly religious, matters and it’s not something anyone can erode from the outside. It can only be weakened from inside. We should, therefore, look at how religious identities have helped people take courageous stands. I know of many Hindus in Ayodhya who protected Muslims in the post Babri Masjid demolition riots. Likewise, Muslims stitch garments for Ram Lalla’s idol in Ayodhya and grow flowers that garland Hindu Gods.

Can Hindutva work in the absence of Muslim identity politics?

Do you see a resurgence of Muslim identity politics post CAA?

Yes. It’s a response to the government’s electoral strategy. The government had hoped CAA would mobilise Hindu votes without violence. They could not encash in Delhi elections. They will now try in Bengal. CAA was originally meant for Bengal.

Mob violence is rising. We see people posting videos of lynching. Is that some kind of celebration of breaking the rules?

Lynching is ghastly. The regime is shouting from the rooftops that those who criticise the country are anti-nationals. But nothing spoilt India’s image as much as lynching did. Until the 1950s, the US was the world capital of lynching. Later they somehow controlled it with laws, but India has revived it and is the only country where lynching survives today as a public spectacle. Of course it signals the celebration of breaking the rules as much as it signals the brutalisation of society. This has much to do with the brutalisation we see all over— people killing their own family members, families committing mass suicides.

Where does society’s recovery lie?

So decentralisation is the key?

Yes, so that responsibility is shared and you don’t make a pan-India effort to mobilise people on the basis of Hindutva. You fight normal elections. RSS chief Mohan Bhagwat has softened much more than BJP politicians talking of Hindutva. Bhagwat even said recently that some of the earlier writings of MS Golwalkar and Savarkar have become dated now.

He didn’t come into power solely on the Hindutva mandate. Hindutva and hyper-nationalism made up a marginal part of the vote. Large part of the money for the campaign came from those who wanted other kinds of returns from him, like higher growth rates, genuine support to corporate and less controls on economy. I think he mainly won because people thought he deserved a second chance.

What will ultimately win — Hindutva or Hinduism?

Hinduism, without doubt. It has survived for 3,000 years because it is a religion, whereas Hindutva is an ideology. Religion is something internal to you. I don’t think Indians will give up their religion to become Hindutva-wadis or rashtrawadis in some sense. Let us not forget that we have a National Poet — Rabindranath Tagore — who hated nationalism and we have the Father of the Nation — Mahatma Gandhi — who said armed nationalism is no different than imperialism.