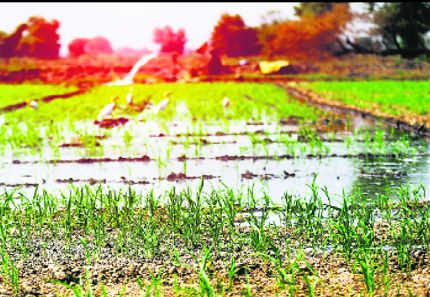 Emphasising the importance of water, Leonardo da Vinci said, “Water is the driving force of Nature.” Guru Nanak said, “Pavan Guru, Pani Pita, Mata Dharat Mahat” (Air is our teacher, water our father and Earth our mother). Though water has been the essential life-supporting system since the inception of life on Earth, it has become a rather more critical input in modern-day life. The increasing world population and consumption-driven development paradigm are raising the demand for food, energy and industrial produce, which, in turn, is leading to an ever-rising demand for fresh water which is not only limited in supply but also has alternative and competing usages.

Of the water available at the global level, fresh water reserves are only 2.5 per cent as 97.5 per cent is saltwater. The major portion of demand for water comes from agriculture; subsoil water is becoming very handy as it is the most reliable source of irrigation. In most of the countries, water availability for agriculture is not only limited but also uncertain. It has also been estimated that by 2050, more than 50 countries, including India, would be facing water scarcity. About 200 crore people will be living under conditions of high water stress by 2050. The global community is responding to the emerging scarcity through various international agencies, such as the UN and the World Bank.

Fifteen states account for about 90 per cent of the groundwater potential in the country, led by Uttar Pradesh (16.2 per cent), followed by Madhya Pradesh (8.4%), Maharashtra (7.3%), Bihar (7.3%), West Bengal (6.8%), Assam (6.6%), Punjab (5.5%) and Gujarat (5.2%). The current annual groundwater extraction is 249 BCM, the largest user being the irrigation sector. This is why the government has called for alternatives to water-intensive crops such as paddy and sugarcane. Compared to the decadal average for 2009-18, there has been a decline in the groundwater level in 61% of wells monitored by the Central Ground Water Board (CGWB).

In order to improve water management and governance, the Central Government formulated national water policies in 1987, 2002 and 2012. The 2012 water policy, inter alia, laid specific emphasis on the deteriorating quality of water and the declining water table. As per the Supreme Court’s landmark judgment of December 10, 1996, the state control of groundwater is covered under the Environment (Protection) Act of 1986. The setting up of the Central Ground Water Authority in January 1997 for regulating water extraction was also under the purview of this judgment.

The Atal Bhujal Yojana (under Jal Jeevan Mission) was launched on December 25, 2019, with the objective of improving groundwater management in the country, especially in the states with a low water table. An updated and modified version of earlier schemes, it is aimed at sustainable groundwater management and judicious use of water through community participation and community’s behavioural changes. The involvement of the community will be by way of gram panchayats and water user associations. It would aim at strengthening institutional framework, capacity building, improvement of data and community-led water security plans. Thus, it is more focused on the demand side management.

Punjab has been excluded from this scheme despite it being among the five states experiencing highest groundwater depletion. Haryana is included, though it does not figure among these five states.

Punjab has made a significant contribution towards India’s food self-sufficiency at the cost of its soil health, depleting water table and diversified cropping pattern. With just 1.53 per cent of India’s geographical area, the state has been contributing 25-45 per cent rice and 40-75 per cent wheat to the Central pool for more than four decades. The success of the Green Revolution confined Punjab to the monoculture of the wheat-paddy cropping pattern. Paddy accounted for only 6 per cent of Punjab’s net sown area in 1960-61, which increased to 72 per cent in 2015-16. The area under wheat increased from 37 per cent to 85 per cent.

The number of tubewells rose from 1.92 lakh in 1970-71 to 14.19 lakh in 2015-16. The area under tubewell irrigation increased from 56 per cent to 72 per cent during this period. Nearly 80 per cent of the water consumption has been for Punjab’s contribution of rice to the Central pool. The state has been virtually exporting its groundwater in the form of rice to the rest of India. Thus, Punjab has a strong case for not only being included in the Atal Bhujal Yojana but also being helped in shifting a sizeable area under paddy to alternative crops so as to protect its groundwater and environment.