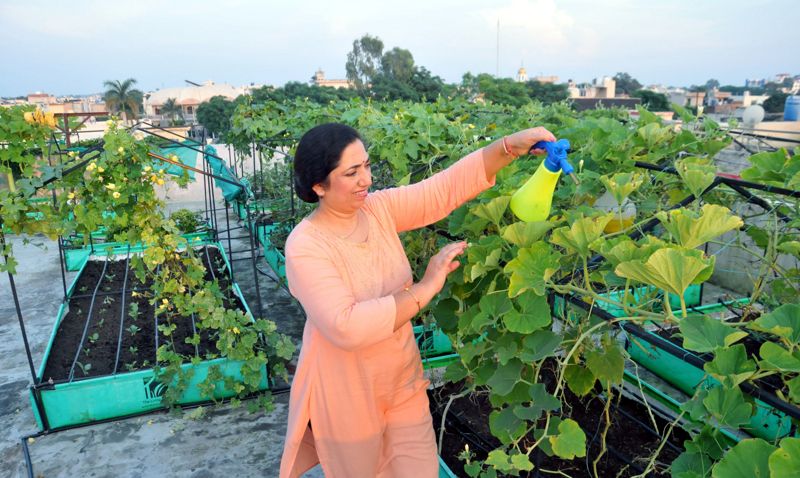 It was a matter of survival and there was no time to ponder. Rohtak-based Alka Kaushal, now 65, had been taking up odd cooking assignments to supplement the family income after her husband’s retirement. Then the pandemic struck and life, as they knew it, became even more of a struggle. Their only son, struggling with legal issues concerning his divorce proceedings, lost his job as a medical representative. Amid a sense of gloom that enveloped the house, Alka knew she had to take things in her own hands and the best bet was cooking.

Aided by a family friend, she created a WhatsApp group and started seeking orders. The neighbours, familiar with her culinary skills, were only too glad. As word spread, the business kicked off. She now regularly supplies for parties and offers tiffin service as well. Her son has got his job back but for Alka, what began as a mission for survival has now become an integral part of her life.

Horrors of the second wave of Covid-19 didn’t spare anyone, rich or poor. For Chandigarh-based Tasveer Libra (36), who comes from a well-to-do family, survival was never a question. But, the vagaries of life posed an unanswerable query. With her husband down with Covid and fighting for life in hospital, the fear of “What if?” was a constant question before this mother of one. The realisation that “bura waqt” could befall on anyone, anytime, shook her to the core.

Pragmatic enough to realise that her degrees — MBA, nursery teacher training, interior designing — would count for little in these trying times, it was a childhood hobby that came to her rescue and Tasveer began making and selling candles. Initially starting with family and friends this April, her client base has expanded to Delhi and Kolkata, thanks to social media. With one exhibition behind her and two more in the offing, her 100 per cent eco-friendly soy wax candles have lit up her life.

Tough times may have been over for Tasveer, but for this 40-year-old woman (who doesn’t wish to be named) from Chandigarh, picking up the pieces after the shattering loss of her husband to Covid was not a choice she could delay. She quickly realised she had to look after her husband’s printing business. With the office, overseeing the construction of their house and tending to kids, even 24 hours are sometimes not enough. “I am grateful to family and friends who stood by me. But I know there are women who have been fighting their battles all alone,” she says.

In Patiala, when her lawyer husband was left with no work during the lockdown, it fell upon Pooja Sidhu (37) to take care of the family of six. With elderly parents and a daughter with a medical condition to tend to, besides monthly expenses and school fee hovering over them, financial worries set in within a month. With no hope of courts opening anytime soon, the mother of two dusted her pans and decided to put her cooking skills to use.

“Cooking has been a passion and my dishes have always been appreciated. With almost everyone turning a chef in the lockdown, I thought of giving it a try too,” says Pooja. Though supportive, her family was initially doubtful about her success amid the competition. Friends and neighbours, too, did not think much about this “khana-banana business”. Undeterred, Pooja started in May last year. “With survival at stake, it was the only option,” says this fine arts graduate from DU. The taste of her biryani and vocal appreciation from happy clients were enough to stabilise her business in just four-five months. Now this homemaker-turned-entrepreneur has a helper and plans to expand.

Sonica Barthwal, a homemaker from Doraha near Ludhiana, too, has tasted success, but hers is a different story, though no less inspirational. The 44-year-old has had a tough life — losing her mother at 10, walking out of an abusive first marriage at 25 — and another rough patch saw her coming out even more resolute. The lockdown resulted in her husband’s salary being reduced by half, the added expenditure of online education for her three daughters, including one from the first marriage, and the home loan burden pushed her to take charge.

A teacher who had quit the profession to look after her kids 10 years back, Sonica fell back upon her Class V obsession: macramé art. “On a whim, I bought ropes worth Rs1,000 and crafted some pot hangers. With my daughter’s help, I displayed my products on Facebook in October 2020. Within a week, I received my first order from Mumbai for Rs750,” says Sonica. The positive response for her eco-friendly works led her to increase the range. Quite tech savvy now, there is no looking back.

Like Pooja and Alka, Ramneet Mann (52), from Jhanjeri village in Mohali, was famous in the extended family and among friends for her pickles. However, it took a pandemic’s financial blow to push her into “the business” of pickles and jams full-time. “My children had always been prodding me, but one day, when my help also implored me to go for it, I wondered what was holding me back,” she recalls. This was a time when Covid had just struck. Paranoia abounded and people were looking for home deliveries. Ramneet tied up with a delivery man to supply her pickle jars along with the milk from her husband’s dairy. With a heartening response and growing demand, her house helps soon began pitching in beyond regular hours. She was also able to employ two village women whose husbands had lost jobs and now supplies to several stores in Chandigarh. Her venture, that began with a simple gobhi-shalgam pickle, includes several varieties of pickles and jams today. Ramneet retails 100 to 150 bottles a month though the work continues without a break.

While these homemakers had to shoulder responsibilities to tide over the hard times their families were facing, there were others who had lost their jobs in the pandemic slowdown. For Jalandhar-based Vandana Bali, who gave up her job for reasons she does not wish to divulge, the setback proved to be a golden opportunity. Her newly set up rooftop kitchen garden had been catching people’s attention and she now started setting it up for others as well. In the last one year, she has handled projects across Punjab, at homes and even in schools. She says she feels privileged to be helping people eat better. “There is nothing like eating vegetables plucked fresh from your kitchen garden. They are rich in nutrients and, as I tell the kids at schools I am working with, full of vitamins H and L, love and happiness!”

While many of these women are in an expansion mode, for Amritsar-based restaurateur and owner of a culinary academy, Drishti Nanda (30), it was the opposite. From a 5,000 square feet restaurant, spread over two floors, the lockdown and high rentals forced her to move her academy and eating joint to her home basement. A MasterChef India (season-4) finalist, Drishti had debuted on the holy city’s eating scene in 2018. Closing down was not an option, but scaling down was. She started anew in June last year with a skeletal staff of four as against 30 earlier. The initial relief came in the form of bread, rather the lack of it. In the absence of supplies and transportation, local wholesalers and retailers approached her, and these loaves became her bread and butter.

An interesting trend that helped her was the dramatic increase in the number of diploma students after the lockdown. “When I started the academy in 2018, I had barely eight to 10 of them; the rest were in for short-term hobby courses. However, almost everyone touched base with their dormant inner chef during the lockdown. At least 30 to 35 are now pursuing long-term culinary courses with me,” says Drishti, who also supplies meals through food delivery apps.

Survival instinct fuelled by the will to fight has been the hallmark of each of these stories. Kamaljeet Kaur (50) left Jahangir, a small village near Dhuri in Punjab, some 30 years ago to move to Mumbai after marriage. Many habits of her homeland fell by the wayside, but raised on a farm, what she could never let go of was her love for homemade ghee. For three decades, she would source buffalo milk and make ghee for her family. Then came the pandemic. A severely affected Kamaljeet landed in hospital last July. “She was lucky enough to survive but her recovery was painfully slow,” recalls her son, Harpreet Singh. As is the wont of a true Punjabi, this shuddh ghee became her trusted remedy to good health.

Back on her feet, she started gifting this elixir to other Covid-affected friends for quick recovery. “Many came back for more. Some also came with their neighbours who had been impressed by the ghee’s aroma that had wafted into their homes,” recalls Kamaljit. That was all the motivation she needed. Armed with her family’s support and the Food Safety and Standards Authority of India (FSSAI) certification, she started selling her hand-churned (bilona) additive and preservative-free organic ghee in January this year under the brand name Kimmu’s Kitchen. The ghee, sourced from Punjab, made of A2 milk of farm-fed buffaloes, has found an increasing number of takers. Her initial client base of 10 has swollen to over a thousand.

While the weight of expectation and responsibility is off the shoulders for almost all of them, the sense of satisfaction and financial independence are gifts these entrepreneur-homemakers are determined to hold on to.