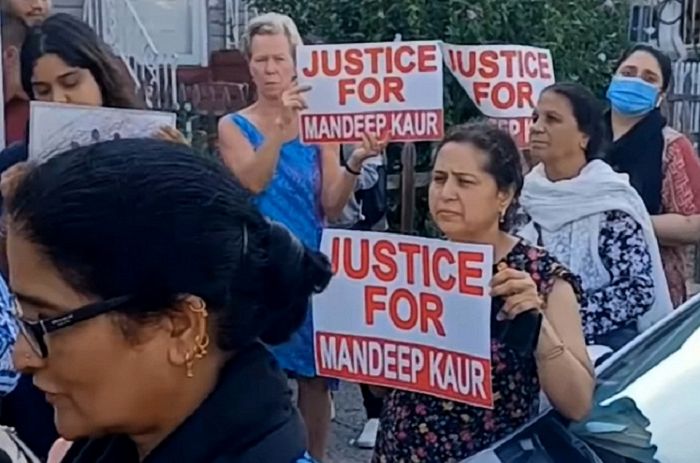 A protest march in the US seeking justice for Mandeep Kaur and other victims of domestic abuse.

“I tried to make everything right but nothing that I did was good enough… Forgive me daddy, I tried very hard to live.” The shockingly poignant video statement Mandeep Kaur, a young New York-based NRI, posted moments before dying by suicide last week, has stunned the South Asian community across the US. 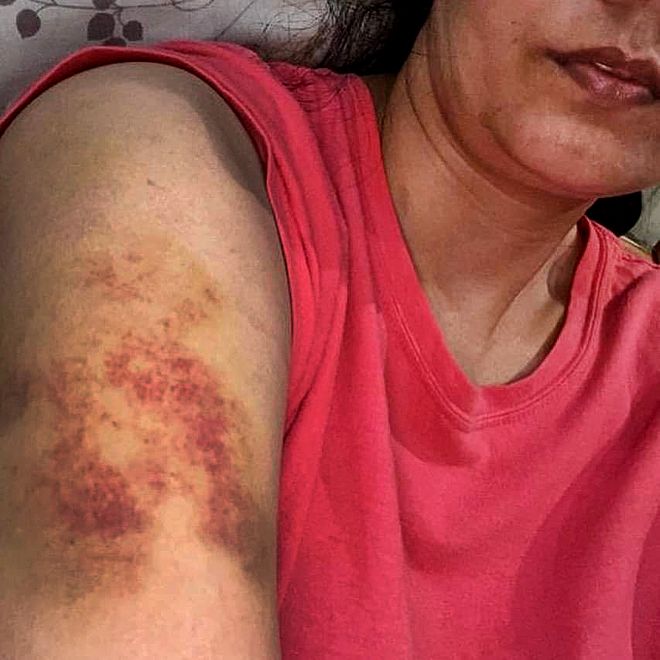 The viral recording, documenting eight years of abuse Mandeep suffered at the hands of her husband Ranjodhvir Sandhu and in-laws for not birthing a son, has spawned a web of vigils in New York, with people seeking justice for the 30-year-old. It was not her time to die, says Japneet Singh, a local political worker, adding, “Enough is enough.”

Back in India, Mandeep’s family is pain-stricken and in utter disbelief over her daughters, ages six and four, continuing to be in the custody of Sandhu.

Conversations with Mandeep’s brother Sandeep Singh, who lives in Uttar Pradesh’s Bijnor, reveal that her troubles began soon after she bore the first daughter after the marriage was solemnised on February 1, 2015. But hopes of a better future kept the abuse hidden.

“When Mandeep left for New York to join Ranjodhvir in 2017, we felt everything would calm down because she would now be away from her ever-instigating in-laws in Bijnor. But that was not to be. Her mother-in-law continued making daily calls to Sandhu. She kept spewing venom till Mandeep reached the point of no return,” says Sandeep, hoping that the case of abetment to suicide lodged in Najibabad against Mandeep’s in-laws, who are currently absconding, bears outcome.

Reluctance to reach out

Mandeep appeared determined to end her life. The parting video she shot was sent to a distant relative in India, and not to the immediate kin. “She did not want us to stop her,” says her sister Kuldeep Kaur.

Mandeep, a graduate, was strong but wanted to keep her home and endured sufferings believing that the abuse would one day end, says the family.

She had even withdrawn a previous police complaint of assault that her father had pressed against Ranjodhvir in New York after he had kept her captive in a truck for five days and assaulted her.

“She was terrorised by Sandhu but desperately wanted to keep her family. She wanted a future for her daughters. Even in the video, she keeps saying it was her fault that she could not make things right,” notes Sandeep on how his sister was overcome with guilt, even when she was the victim.

US-based South Asian women’s groups flag a pattern of silent endurance among diaspora women who bring the homeland’s social constructs with them.

“South Asians are reluctant to reach out for help or call 911. A sense of shame and stigma overwhelms them. The idea of duty to the family is invoked and projected onto the survivor as a form of power and control. These social handcuffs stop women from seeking help,” explains Kavita Mehra, a leader at Sakhi, the second oldest organisation (after Manavi) in New York, working with South Asian abuse survivors.

With domestic violence assuming epidemic proportions worldwide, as UN Women noted last year, the US now has 30 South Asian women groups working on gender-based violence. Globally, one in three women has experienced abuse; the US national average is one in four; the US South Asian average is two in five.

As in India, where suicide is the leading cause of deaths among 15 to 39-year-olds, in the US, too, suicide is now the 10th leading cause of death. The Centers for Disease Control and Prevention puts suicide rates among Asian Americans at 6.59 per cent. A study by the University of Texas, Rio Grande Valley, reveals that conflict in South Asian families contributes to a woman’s unhappiness, depression and domestic violence, triggering suicides. So does the pressure of being a “model community”.

“South Asians do not feel comfortable sharing their personal information or family problems with their healthcare providers in order to protect family dignity. There is also a stigma about seeking help from the providers,” the study notes.

Authors add that the model minority image of the South Asians creates pressure, which places high expectations on individuals.

“Sometimes, this burden of high expectations becomes unbearable,” notes the research about South Asians, considered a model community in the US for their highest proportion of college degrees and handsome average annual incomes.

Field evidence suggests that as in India, gender-based violence in the US cuts across religion, race and socio-economic status.

Sakhi, Manavi and other groups receive abuse calls from all locations — the working class Richmond locality in Queens where Mandeep Kaur lived; suburbs of Boston and LA, and even the upmarket San Francisco Bay Area, which houses the Silicon Valley.

“Relationship violence is about power and control, not about the economic status of the one being abused,” says Balbir Gurm, founder of The Network to Eliminate Violence in Relationships, a group of 100 organisations working with survivors in Vancouver, which houses the largest segment of the Indian diaspora in Canada, where too domestic abuse is growing.

Gurm says there is evidence that less than 25 per cent of abuse survivors in Canada seek help even though 25 per cent of all calls to the police, at least in Surrey, British Columbia, where she lives, involve relationship violence.

“We as a society condone abuse because we do nothing to stop it. Survivors are discouraged by families to speak out because what will people say? There is pressure to stay in an abusive relationship because walking out will make us look bad. This keeps abuse hidden,” Gurm notes.

Add to that the NRI women’s fear of losing their visa/passport for which they depend on their husbands, the invariable perpetrators in abuse cases. Finally, it is the justice system that pushes victims away.

A case in point is of a former Apple executive Neha Rastogi who, in 2016, pressed charges of domestic abuse against her husband Abhishek Gattani, CEO of a Silicon Valley startup at the time.

Despite pleading no contest to abusing his pregnant wife, Gattani was offered a plea deal for less than 30 days in jail. He walked out of prison even earlier.

Neha, in the victim impact statement, declared herself doubly victimised by the perpetrator and the justice system after Gattani’s assaults were reduced to “offensive touching” to help him escape deportation to India. “I am the joke here,” the ex-Apple employee who worked on Siri and Facetime, often sitting next to Steve Jobs himself, famously said. Neha has since rebuilt her life. She told The Tribune from the US that despite laws against domestic crimes in most countries, victims faced revictimisation from society, the police and the justice system as they made a life-changing trip from danger to safety.

“To all victims who are still living in their hell or are on path to safety, I want to say that I believe you. I have felt the same palpitations as you do. I have walked the same dark alleys as you... this darkness might never go away, but shades of black will begin to lighten as you move away from your abuser. There will come a day when you will begin to dream again. You can bring that day home,” says Neha.

Trust in the survivor’s testimony matters most on the path to healing. Gurm also speaks of how most women complain of being re-victimised by the system and are, therefore, reluctant to report abuse.

For those who report the crime, the road to recovery is never easy. Days before Mandeep hanged herself, Chicago-based TikToker Sania Khan, a Pakistani, was killed by ex-husband for discussing their divorce online. Her fault? She had dared to bare her wounds. “Going through a divorce as a South Asian feels like you have failed in life. The way the community labels you, the lack of emotional support…the pressure to stay with someone. This makes it harder for women to leave marriages that they should not have been in to begin with,” Sania’s month-old TikTok post says. These could have been Mandeep Kaur’s words too.

What the Indian government is doing

May 2017: An expert panel set up under retired Justice Arvind Kumar to identify legal hurdles faced by women married to NRIs and proposed amendments to laws.

August 2017: It recommends compulsory registration of NRI marriages and establishing an inter-nodal agency of ministries of external affairs, home and women and child to deal with NRI issues.

February 11, 2019: The Registration of Marriage of NRI Bill 2019 introduced in Rajya Sabha. The Bill proposed to amend the Passports Act 1967 to make registration of NRI marriages mandatory within 30 days of solemnisation and grant powers to passport authority to revoke or impound the passport or travel document of the NRI in case of non-registration. The Bill also provided for amendment to the CrPC to say that if an NRI fails to answer summons, these will be treated as served by being posted at an MEA website, and likewise arrest warrants would also be treated as issued. It also provided for attachment of properties of NRIs declared as proclaimed offenders. Bill referred to a parliamentary panel.

March 13, 2020: Panel says NRI should be defined as a citizen of India who lives outside India for any purpose, except tourism.

Current status: The Bill was listed for introduction in Monsoon Session but could not be tabled.