Beyond the Taj Mahal

There’s a lot more to Agra than just the Taj Mahal. A heritage walk through its Old City brings one face to face with the rich past of this iconic place 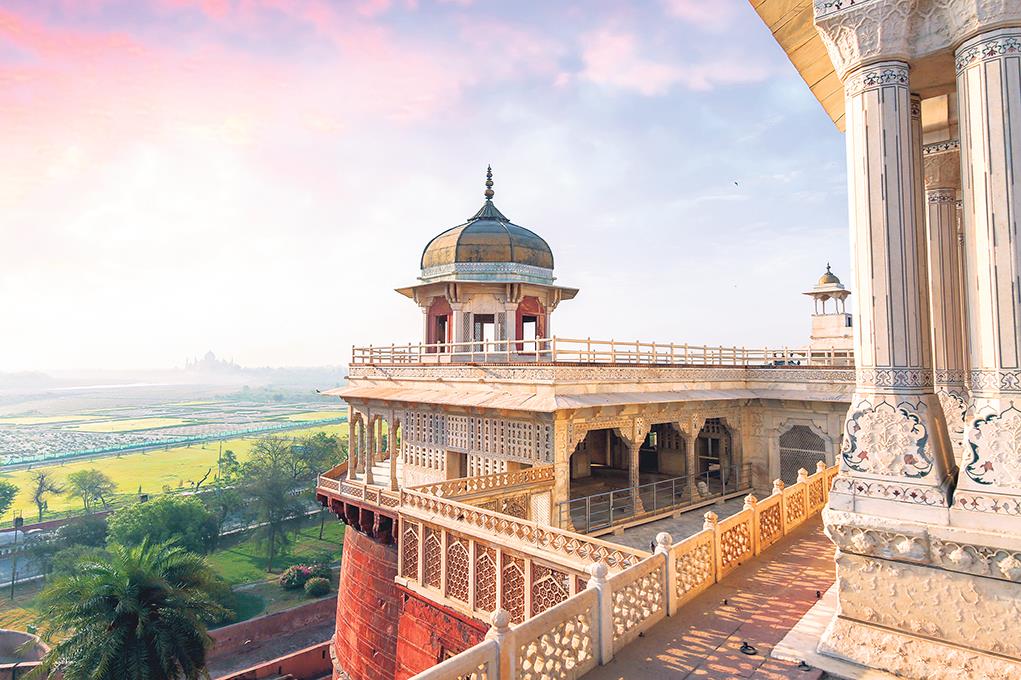 Grand: A view of the intricately carved Diwan-i-Khas and Musamman Burj dome of the Agra Fort. istock

I’m trawling through the Old City of Agra, soaking in the atmosphere so thick it could be sliced with a knife. In this maelstrom of sights, sounds and smells, the inescapable sense of being transported thousands of years back to the age of the great Mughals is surreal. And I dive right in.

Like any small Indian town, the beating heart of Agra is a warren of lanes abuzz with vibrant bazaars. Commercial insanity reigns in these markets where people have been buying and selling goods since the 16th century, when the city founded by Sikandar Lodhi was called Akbarabad.

To fully immerse myself in this cultural blast furnace, I negotiate a tangle of twisty alleyways where culture and commerce coalesce to create an astonishing sensory experience. My tour begins at Chimmanlal Puri Wale’s shop near Agra Fort. Guide Pradeep Sharma, who has been living in Agra for 38 years, explains that the shop has been selling puris at the very same spot for over 150 years! In an age when eateries down shutters rather swiftly, the comment provides me with food for thought! Literally.

Meanwhile, lured by the aroma of rotund and delicious deep fried breads, I make my way to the eatery’s counter, only to be instantly transported to an olfactory heaven! Diners can be seen digging into compartmentalized thalis comprising four puris, aloo-tamatar and sitaphal sabzi, boondi raita, and a tiny bowl of peas-anointed jeera rice.

Unfortunately, we’re on a tight schedule, so there’s no time to stop and try the stuff. Watching me eye the food lustily, the guide smiles while simultaneously urging me to “keep moving”. A good advice, considering we’ve already compressed the three-hour tour into 90 minutes.

The visual theatre continues apace as we walk further down towards Kinari Bazaar, famous for selling exquisite zardozi embroidery items. A little trot down, we enter Sadar Bazaar brimming with inexpensive leather goods. “What you get in malls is available here at a fraction of the price,” the guide explains as I inspect an array of well-made shoes, handbags, wallets and other leather goods.

Despite an expert walker, I find that navigating Old City’s gullies is no cakewalk. Kamikaze rickshaws, scooters hauling families of four and pushy vendors hawking vegetables and fruits make a pedestrian’s task quite unenviable. Adding to the complexity is the fact that I have to juggle all this while snapping photos and jotting down the guide’s commentary. Oh yeah, did I mention that I was also advised to keep a ‘strict eye on my handbag’?

Be that as it may, we continue our tour zestily, next entering a narrow lane selling articles used for the adornment of images of gods and goddesses. Think mini crowns, fake jewelry, ornate dupattas, bangles, etc. However, my favorite market turns out to be the wholesale spice, grain and pulses market called Rawatpara. This is where dozens of shops sell exotic spices, condiments, aphrodisiacs and herbs. How I wished I could have bottled its aroma and take it back home with me!

“Rawatpara is also the best place to buy the famous Agra petha,” Sharma advises as we saunter past kiosks hawking the iconic candy dessert crafted from winter melons, also called ash gourd. Shopkeepers regale us with stories about how the gummy confection is the purest form of sweets — just fruit, sugar syrup and water. Some of the earliest examples of petha, I’m informed, be traced back to the royal kitchens of emperor Shah Jahan.

Rawatpara also houses beautiful havelis. Embellished with the statues of mythical gods and goddesses, this historic domestic architecture adds more character to the Old City. It also testifies to a continuing living history when Agra was a prosperous mercantile town during the late-Mughal and colonial times, with Hindus and Muslims living amicably.

“Most shops have owners selling wares on the ground floor and living with their families upstairs,” says Sharma as we stop to talk to some residents inhabiting these charming residences.

Walking among the blend of people of different communities and religious backgrounds living together also gives me a peek into Agra’s famous syncretic culture. Reinforcing the city’s pluralistic ethos further are the glimpses of sundry Hindu and Muslim monuments — Jama Masjid, Jain temples, and other shrines belonging to smaller communities, which we encounter during our sojourn.

Another rewarding find in the middle of Rawatpara is the Mankameshwar Temple. I’m instantly awed by its silver-anointed shivlinga with big, black eyes that shine from afar. Legend has it that the temple was founded by Lord Shiva himself during the Dwapara era, the period when Krishna was born in Mathura.

The temple’s sanctum sanctorum showcases Lord Shiva’s statue surrounded by idols of other smaller deities. The air is suffused with the smell of frankincense and rosewater. People can be spotted praying; some so immersed in the activity that they are moving back and forth, their eyes closed as if in a deep trance. Nearby, a large and handsome tank with curious ornate gateways adds to the shrine’s vintage charm.

More shrines loom up ahead, mostly tiny and open, fronted by a cargo of fruits, leaves and coconuts placed by devotees as offerings. Some don’t even have a pujari (caretaker priest) —  such is the innate trust among locals. “Do you know there’s no word for a lock in Sanskrit?”  the guide asks me.  I look down sheepishly thinking of the fancy gizmos I use at my residence to prevent thefts.

As we walk further, we’re just in time to catch the morning bustle at the shoe mandi in Johri Bazar. The petha mandi, and the food street of Seth Gali further on impress us with their gastronomic offerings at rock bottom prices.

At the tour’s end, I discover I’ve fallen deeply in love with Agra while discovering the magical world of its ancient markets. These relics of the past, I muse, have taught me more about Agra’s rich history, architecture, traditions, gastronomy and its warm people than my school textbooks ever did. Truly a lesson of a lifetime that I will cherish forever!