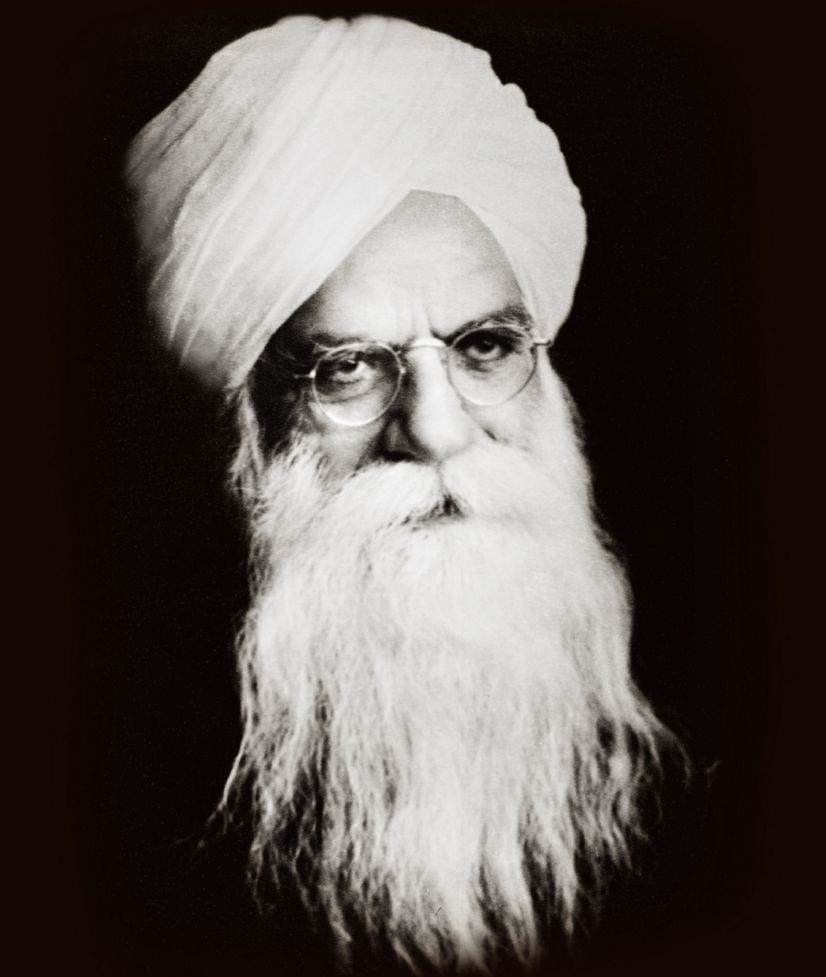 TO mark the completion of the year-long celebration of the tercentenary of birth of the Khalsa in 1999, a survey was conducted posing a question to prominent men and women of letters — Bhisham Sahni, Ajeet Cour, Patwant Singh, Maheep Singh and Manjit Bawa — as to ‘who was the most influential Sikh of the 20th century?’ They all agreed that it was Bhai Vir Singh, who left a lasting impression as a man of letters and was declared as the ‘Greatest Sikh’ of the 20th century.

While there is no denying the fact that Bhai Vir Singh was, and remains, the most influential Sikh scholar of the 20th century, a careful study of his writings shows that his concerns transcended boundaries of time and space. It is therefore important that Bhai Vir Singh is taken out of the ‘temple of adoration’ as ‘Poet of the Sikhs’ and projected as ‘Poet of Cosmos’ with concerns beyond Sikh identity.

Bhai Vir Singh, through his writings, created a distinct Sikh identity with the spiritual rejuvenation of his community. There was a gradual transformation to his becoming a poet of sublime beauty

Bhai Vir Singh was born at a time when there was a growing religio-political awakening and movements like the Singh Sabha and Arya Samaj were greatly swaying the young minds. He was both the product of the Singh Sabha movement as also its guiding spirit. It is a strange coincidence that Vir Singh was born a year before the launch of the Singh Sabha movement and became one of its chief spokesmen. What distinguishes Bhai Vir Singh from his contemporaries is the fact that rather than entering into any political controversy or the Arya Samaj-Singh Sabha polemics, he decided to work for the spiritual rejuvenation of his community. This he did by providing inspiration from the historical past. Through the efforts of Bhai Vir Singh and other traditional intellectuals, the Singh Sabha soon became a force to reckon with. It not only created a new self-awareness and confidence in the Sikhs but also made the members of the community realise their backwardness in various fields. Bhai Vir Singh thought that the only way to take his community out of the prevalent mess was through the propagation of the high ideals and institutions of the Sikh faith, and this he did through his novels, poems and other literary works.

Being a product of Christian Mission School, Amritsar, Vir Singh was well aware of the modus operandi of the Christian missionaries. He realised how the setting up of the first printing press in Ludhiana in 1835 had redoubled their missionary efforts. It was therefore in the logic of things that in Bhai Vir Singh’s plan of countering missionary propaganda, a printing press was set up in Amritsar in 1892, which became a powerful vehicle of propaganda of the Singh Sabha movement. Two years later, the Khalsa Tract Society was also established in Amritsar with the objective of reaching a larger Sikh audience. In 1899, Bhai Vir Singh founded a Punjabi weekly, the Khalsa Samachar. Most of his works were first published either in the form of tracts or serialised in the Khalsa Samachar and later published in book form. Careful planning and execution of Bhai Vir Singh’s literary agenda contributed in creating the needed awakening among the Sikhs.

Bhai Vir Singh was the most prolific writer in the field of tractarian literature in which he presented an awe-inspiring and stirring version of the history of the Panth through the means of historical fiction. As he stated in the preface to his first novel, ‘Sundri’, “The purpose kept in view of writing this book is to educate the Sikhs about their history and to inspire them to become true adherents of their religion.”

Bhai Vir Singh was the author of numerous novels, poems, religious histories, biographies of the Gurus, pamphlets, newspaper articles and tracts. He is recognised as the father-figure amongst Punjabi writers who turned to writing in Punjabi at a time when it was not considered a language of literary speech among the learned in Punjab. His novels are a perfect example of his literary abilities and his reform instincts and are among his most popular works. In fact, ‘Sundri’, first published in 1898, continues to be a bestseller even today and has been re-printed many times, latest being the 51st edition. He also wrote three other novels — ‘Bijai Singh’ (1899), ‘Satwant Kaur’ (Part I-1900 & II–1927) and ‘Baba Naudh Singh’ (1921). In his novels, Bhai Vir Singh not only created a distinct Sikh identity through various characters but also implemented the agenda of the Singh Sabha movement, which received patronage from the British rulers in Punjab.

While Marxist scholars describe Vir Singh as a writer ‘who was still clinging to medieval values’, his admirers have projected him as a venerable saint-poet. Prof GS Talib and Prof Harbans Singh, who translated his poems into English, published their book under the title ‘Bhai Vir Singh: Poet of the Sikhs’. Such a title limits Vir Singh to Sikhs. While going through the book, one finds that majority of the poems deal with nature and its beauty with a universal appeal. Lt Col JS Guleria, who edited an anthology of papers on Bhai Vir Singh, calls him the ‘sixth river of Punjab’. Though this raised Vir Singh’s reach from 25 million Sikhs to 135 million Punjabis, he still remained confined to religious and geographical boundaries. Ironically, while the title is ‘Sixth River of Punjab’, in the first essay, Guleria describes Bhai Sahib as the ‘Universal Man’. Dr Mulk Raj Anand was so inspired by Bhai Vir Singh’s example that he mastered the Punjabi language in order to properly understand the philosophic content of his verse and prose.

While Bhai Vir Singh was aware of the western trends in literature being introduced in Punjab, he retained his own independent style in Punjabi writings. We also find a good deal of western classics in his personal collection in Amritsar and Dehradun. From the ‘Reminiscences of Puran Singh’ written by his grand daughter-in-law, Basant Kumari Singh, and from the study of a large body of tracts in Punjabi and other languages published from time to time, one finds that he not only studied western classics like Homer’s epics, ‘The Iliad’ and ‘The Odyssey’, but also published their gist in Punjabi. Vir Singh also translated ‘Gulistan’ into Punjabi and published it under the title ‘Gulabwadi’. An interesting account of the aliens on Mars is given in another tract, ‘Mangal di Sajri Sair’. In Bhai Vir Singh’s writings, there are references to Confucius, Shankaracharya, Kalidas, Sheikh Saadi, Hafiz Shirazi, Omar Khayyam, Socrates, Einstein, Plato, Aristotle, Shakespeare, Chaucer, Immanuel Kant, Hegel, Goethe, Max Mueller and others.

While I have not been able to find any direct evidence of Bhai Vir Singh being influenced by the writings of Sir Walter Scott, who like him wrote historical novels, poetry, short stories, plays and non-fiction, I find a strange parallel. Like Walter Scott, who popularly came to be known for Waverly novels, Bhai Vir Singh was an equally prolific writer. He even wrote a play, ‘Raja Lakhdata Singh’, but came to be popularly known as Sundri karta, author of ‘Sundri’, his first and most celebrated novel.

Bhai Vir Singh’s love for nature is not nature-worship of the ancients. For him, nature is the outward personality of the divine presence, and if he has described nature at such length, it is because he has felt the unseen power working behind it:

My friendship with stars is of old;

At midnight down they come to me,

Sliding down the strings of rays,

And they enter into my soul

Bhai Vir Singh thus describes the agony of wild flowers and trees. In his poem, ‘Baneshfe da Phul’ (Violet flower), which grows on a mountain’s ledge and remains generally hidden, is located and plucked:

I seek to live in solitude

And wither and cease;

But the eyes of the scent-crusher

Seek me, And break my peace.

Agony of the wild kikar tree (acacia) is thus described by the poet:

My march is heavenward,

My face is turned to the

God of the skies!

From a careful perusal of Bhai Vir Singh’s writings, we notice his gradual transformation from a man of letters passionately working for creation and consolidation of Sikh identity to a poet of sublime beauty. His literary journey, which started with creating religious boundaries through ‘Sundri’, ends with transcending boundaries through his poetic works whose concerns are universal, and reaches the Ultimate in his last work, ‘Mere Sayian Jeo’, published in July 1953, for which he was awarded by the Sahitya Akademi in 1955, the first such honour for a work in Punjabi language.