Royal background, contemporaries in service and friends outside the military, both Sawai Bhawani Singh & Sukhjit Singh were awarded MVC 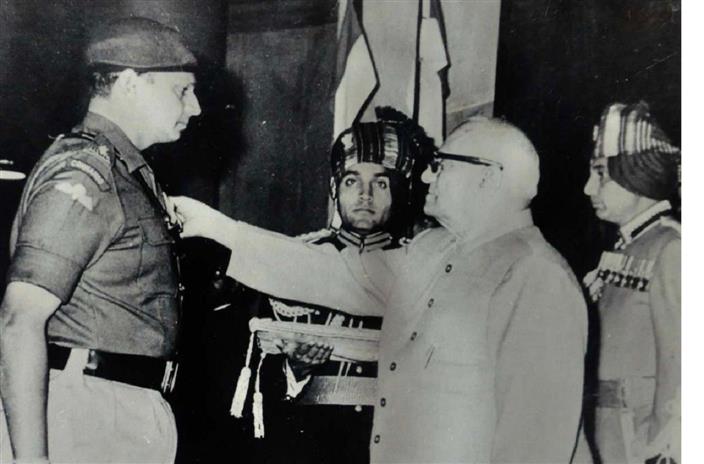 So much champagne flowed to celebrate his birth, as myth and legend have it, that they nicknamed him “Bubbles”. Myth and legend competed through his stellar military career and continued the contest beyond it.

It was not a Champagne Run, though, that got ‘Brigadier His Highness Saramad-i-Rajahai Hindustan Raj Rajendra Shri Maharajadhiraj Sawai Bhawani Singh Bahadur’ a Maha Vir Chakra when he was a Lieutenant Colonel in 1971.

For, the last of the ‘Maharajas’ — before Prime Minister Indira Gandhi abolished the privy purse for the rulers of the erstwhile princely states earlier that year — was lionised for having led raid after raid at the head of 10 Paras (commandos).

Later to be known as the 10 Para Special Forces (‘Desert Scorpions’), the battalion was the tip of the spear that pierced deep into enemy territory in Pakistan’s Sindh through the Thar desert, in territory that was once partly under the House of Kacchawaha (the Jaipur royals).

Myth and legend are somewhat conditioned by the quality of record-keeping about the deeds of the feted ‘Desert Scorpions’. The citation by the Ministry of Defence reads:

“On the night of December 5 (1971), Lt Colonel Sawai Bhawani Singh, who was commanding a battalion of the Parachute Regiment (commandos), led his men deep into the enemy territory and for four days and nights, with complete disregard for his personal safety, made skillful and relentless raids on the strongly held posts at Chachro and Virawah.”

There were two companies he was leading — Alpha and Charlie. After zooming through the night over sandy desert dunes and vales in Jongas, the companies scared the enemy first with the cacophony they caused. Then, Alpha company partly surrounded a wing of the Pakistani Rangers’ fortified post at Chachro, some 70 km from the border, while Charlie company raided it. They took prisoners.

Then the commandos headed for Virawah. Action repeated itself with the element of hand-to-hand fighting added. In “gingering up the enemy”, Bhawani Singh’s boys killed 17 Pakistani soldiers in the surgical strikes with light machine guns mounted on their jeeps.

Then they raided Nagarparkar, another defended Pakistani position, before returning to base. At the base, they were given yet another task — to blow up an ammo dump in Islamkot that they duly proceeded to do. All of them returned from all the raids. There was no Indian casualty.

In the blitzkrieg that was said to have been modelled after a British SAS raid behind German lines in Libya during World War II, there was a dissonance between a certain ‘A’ and a certain ‘B’, ‘A’ being for the anecdotal and ‘B’ for the battle action report.

In ‘A’, Lt Col Bhawani Singh has also narrated that after crossing into Pakistani territory, somehow the local Khemkhanis (Rajput Muslims) had learnt that their Maharaja was in the vicinity. They wanted to reverentially bow to him, in an account by his friend Brigadier Sukhjit Singh, with cries of ‘Khama Ghani Maharaj’. The villagers, according to Sukhjit Singh, were “demonstrating that borders have never severed generational ties of fealty”.

B: the battle action reports as well as the citations of 10 Para SF during 1971 are non-existent, according to the MoD. The response to a Right to Information query said, “The relevant record of citations has been destroyed as per policy in vogue.” (Reported by The Print in 2019).

At last count, 36 Pakistani soldiers were killed by the Paras and 22 others were taken prisoner.

“The name ‘Bubbles’ is in a way a misnomer for the frivolity it implies,” Sukhjit Singh wrote evocatively after his friend’s death in April 2011. “He was not an indolent prince of leisure but an exemplar tour de force, who brought gravitas to each and every one of his roles and responsibilities. At the same time, it should be conceded that his effervescent personality gave ample grounds for this to be a well-suited ‘pet name’. Military punctilio, ceremonial exactitude and elegance, all came naturally to him.”

Sukhjit Singh was/is a prince himself, from the House of Kapurthala. His fondest memory is of rides with his grandfather, the Maharaja of Kapurthala, “in a zebra-driven chariot in the zoological gardens of the palace”, according to an interview to The Tribune.

Sukhjit Singh, also of the armoured corps’ Scinde Horse (14 Horse), was its Commanding Officer as a Lieutenant Colonel in the Shakargarh sector, the bulge that threatened the Pathankot-Jammu national highway linking to Srinagar.

His exploits with his men on the then modern T-55 tanks are part of military lore to this day. The Scinde Horse was the first to have got the tanks imported from Soviet Russia in 1966.

He was leading the charge from the south of bulge, in skirmishes leading to the epic Battle of Basantar.

“On December 10, 1971, his regiment was deployed west of Naina Kot when the enemy launched an armoured attack in strength under cover of intense artillery and heavy mortar fire,” his citation noted.

Despite the flak from the Pakistani forces, Sukhjit Singh manoevred his machines, leading his columns from the open cupola of his own tank, sometimes with his dust goggles raised to the forehead to see better through binoculars so that he could direct volleys from his men most effectively.

The next day, on December 11 again, he personally outflanked the enemy to close in on them despite its medium artillery and mortar fire. The Pakistanis lost eight tanks, Shermans and Pattons. The intention was to capture the enemy tanks. One Pakistani officer, two junior commissioned officers and two other ranks were taken prisoner at Malakpur.

He was already a veteran of armoured warfare having been schooled in this regard whilst serving with the Armoured Division in the Sialkot sector during the 1965 operations.

An excerpt from The Tribune (March 19, 2021) quoting him reads: “The 1971 war was raging. I was Lieut Col at that time. My troops managed to round up Pakistani soldiers. Among them was a tall, smart guy with whom I began talking just to cull more information. As our conversation was on, he told me, ‘I have one last wish.’ I replied, ‘What makes you think that we are going to kill you?’ During further inquiry, we got to know that he is the son of Sikandar Hayat Khan, a former premier of Punjab. He was among those who were set free. Much later, I met the family as well.”

After 26 years in the Army and the decoration, the man who led that charge and is said to have influenced the Punjab Chief Minister, Capt Amarinder Singh (of the Patiala royals), to join the Army, has also had long legal tussles, including one when he was posted in the military operations directorate.

Sawai Bhawani Singh and Sukhjit Singh were not only contemporaries in service, they were friends outside the military. Bhawani Singh was schooled at Seshbagh in Srinagar, Doon and Harrows. He was commissioned into the 3rd Cavalry in 1951 before moving to the President’s Bodyguard and then to the 10 Paras. He was recalled to service to be conferred the rank of Brigadier post-retirement and before being sent on diplomatic assignments.

Sukhjit Singh was also educated at The Doon School before training at the Indian Military Academy.