Buddhism and the caves of wonder : The Tribune India

Buddhism and the caves of wonder 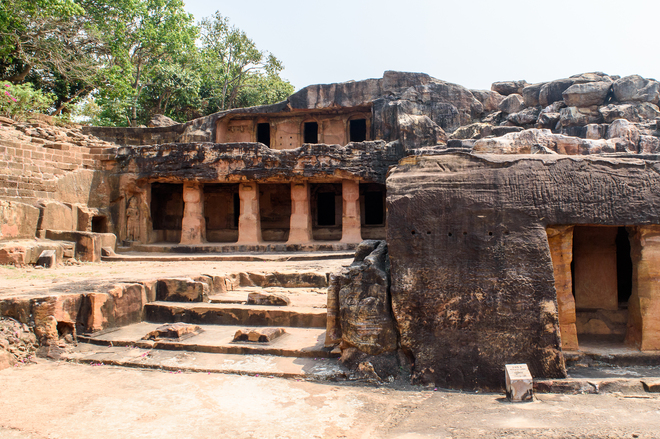 The Udayagiri caves in Odisha

The chair lift passenger ropeway makes for a thrilling ride, a thousand feet above ground, taking you to the Vishwa Shanti Stupa at Ratnagiri hills in Rajgir in Bihar. After circumambulation of the stupa, walk towards the Griddhakuta hill (Vulture's peak), the site of two natural rock-cut caves. This is where Gautam Buddha retreated, stayed and meditated and preached his sermons in the 6th century BCE. Sixty-five km from Gaya, where Buddha attained enlightenment, Rajgir is sacred to the Buddhists.

Archaeological survey, ancient ruins and historical memoirs have shown caves around the world as sites for meditation, shelter, art, burials and worship. In India, among all religions, Buddhism's eternal fascination with caves manifested into some spectacular rock-cut cave art and architecture. The caves provided splendid isolation for meditation, asceticism and frugal lifestyle for the Buddhist monks.

Buddha retreated to the natural caves of Rajgir hills for meditation, thus starting a tradition that continued for over a millennium. The Buddhist texts mentions Indrasala cave where Buddha lived for a while and gave sermons. Embedded in the hills are the seven Saptaparni caves where the first Buddhist council was convened after Buddha's parinirvana (divine death). It was here that Buddhist sacred Tripitika (earliest teachings of Buddhism) was formulated in Pali language in oral tradition.

It was three centuries later that Buddhism found patronage from Emperor Ashoka and along with stupas, Ashoka edicts and monasteries; artificial rock-cut caves were carved in the hills. Just 24 km from Gaya are the caves of Barabar (322-185 BCE) and Nagarjuni hills in Jehanabad district, considered to be the oldest surviving rock-cut caves in India.

Carved from a monolithic granite hill, the caves show great skills of those times with its lustrous polish on interior stones, carved chambers and huge arches. The Lomas Rishi vave has spectacular lattice work carving and rows of elephants paying homage to the stupa on its arched entrance.

The longest cave in India, the limestone Belum caves in Kurnool district is the most famous in Andhra Pradesh. Relics and vessels dating to 4500 BCE indicates the inhabitation of Buddhist monks, who meditated deep down in the labyrinths of the cave.

Several monks fled post the decline of the Mauryan empire and found shelter and patronage from the Satavahanas in Andhra. Several Buddhist rock-cut caves are found near Vishakhapatnam. Several Buddhist caves and sculptures found there indicate that Buddhist monks used them as their residence, athough there are indications of Jain and Hindu presence too. One of the most recent discovery is the Buddhist cave in Dhanamkoda hill in Vijaywada.

Buddhism found patronage from Western Kshatrapas and later Maitraka rulers in Gujarat. Though much is known about Jainism in Gujarat, little is known about Buddhism that flourished during 1st-8th century CE. Hiuen Tsang’s records point to 200 caves in Saurashtra, Vallabhi and Anandpura (Vadnagar).

Two of the oldest Buddhist caves in Saurashtra were found in Khapra-Kodiya and Baba Pyara. There are many caves around Junagadh and coastal belt. Caves of Sana (Amreli) and Talaja (near Bhavnagar), date 5th century BCE to 2nd century CE, are among the oldest in India. In Kutch are the Siyot caves of Lakhpat village and the limestone Khambalida caves (near Gondal) with the carvings of Bodhisattvas.

Historians say Buddhism came to Gujarat via sea route through Maharashtra, so most early caves are in coastal Gujarat and in and around Junagadh. Among the oldest is the Khapra Kodiya caves. The roads leading to the secluded caves goes through the unkempt streets of old Junagadh city. Situated on the quiet outskirts, it had also been the site for a horror film shoot, though there is nothing spooky about it. The caves are carved out in an east west longitudinal ridge. The architecture is simple with no images or carvings. There's a L-shape monk residence and a water tank.

The caves in the Uparkot fort, too, have an advance water tank. The much-frequented caves have three-storeys of cells and carved pillars. As you enter the narrow passage into the cells, you find them well-ventilated with ample sunlight and cool air.

In the popular imagery of forts and havelis in Rajasthan, the various Buddhist caves in the laterite hills of eastern Jhalawar district remain unnoticed by tourists. From plain rock-cut caves of Hathya Gaud and Binayaga to much more elaborate with life size Buddha carvings, stupas and chaitya are the 50 cave complex of Kolvi. With time, most caves crumbled but those intact show skilled carvings.

The historians ponder whether these cave sites were part of the Buddhist community that lived in Dhamnar (in Madhya Pradesh). One of the sites, Saru-Maru caves in Sehore district, are considered as examples of transition from natural to artificial as rock-cut stairs and benches for monks are seen. Though caves are simple, some engravings of Buddhist symbols of kalasa, triratna and swastika are present. A trekking through the lush green forest of Satpura is required to visit these caves, a delight for nature lovers and those interested in birdwatching.

Buddhist caves abound in the western ghats. The basalt rocks and the hilly topography was ideal for cave building. The first wave of caves is from 2nd century BCE-4th century CE, belonging to Hinayana Buddhism that included caves of Kanheri, Karla, Bhaja and Bedse. The last three caves have similar architecture with apsidal plan and vaulted roof. Taking a flight of 150 stairs to Karla cave provide spectacular sight of lush green western ghats with series of small waterfalls during monsoon. It is more crowded though; Bhaja and Bedse are less frequented and equally serene and enchanting.