The contagious disease has been wreaking havoc in the dairy sector, the state’s second largest employer after agriculture 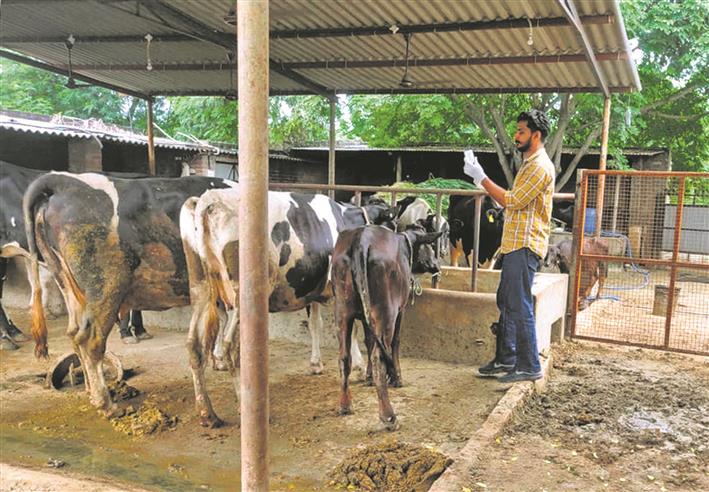 In the last week of June, farmers from Fazilka and Bathinda districts reported the formation of lumps on their cows. Punjab’s Animal Husbandry Department took it for some ordinary disease. Unaware of the havoc it would cause, the department remained inactive for several days. After a severe loss of livestock, the government finally accepted the presence of lumpy skin disease (LSD). The disease, which was first reported in Gujarat’s Kutch in April, is believed to have reached Punjab in June. On July 4, the first documented case of the disease, which can be fatal for cows, was recorded in Mehta village in Bathinda. Since then, the disease has infected 1.25 lakh cows and more than 10,000 have succumbed. The fatality rate remains considerably high at around 8 per cent.

Despite enough warning signals and alerts since May, the department was found napping even when the disease had spread to the bordering Rajasthan. It took 23 days for the government to swing into action after the first case was reported. On July 27, it claimed that the outspread had emerged from southern states and formed district-level teams to prevent the further spread. These teams were asked to visit villages and provide necessary measures to the farmers to protect the infected animals.

The state, however, failed to touch the real solution — the vaccine. When farmers approached the department for it, they were told that there was no vaccine for cows, though one for goats and sheep was available. The officials, it seemed, were unaware of the vaccine called Lumpyvax, available for use on cows.

The state’s North Regional Divisional Diagnostic Lab in Jalandhar doesn’t have the facility for testing the disease and the samples have to be sent to the National Institute of High Security Animal Diseases, Bhopal.

Now the bigger worry for Punjab is that the disease, which was confined to cows, has surfaced in buffaloes as well, although experts argue that it is not that dangerous for buffaloes. “So far, we have found nearly 60 cases in buffaloes but there is nothing to worry as the symptoms are weak and mortality rate zero,” says Dr Rampal Mittal, Punjab’s nodal officer for LSD.

The department is not sure how the virus will change or mutate once the weather conditions change. “You never know how it can affect other livestock,” says Dr Nitin Kumar, a retired deputy director from the state’s Department of Animal Husbandry.

The disease is threatening the crumbling rural economy of the state. According to experts, Punjab is reeling under agrarian distress and the disease has the potential to usher in another crisis in rural Punjab, where dairy farming is the second largest employer after agriculture.

“Even a month after reporting the first case of the disease at my farm, the officials were clueless about the vaccine,” says Muktsar-based Harsimran Singh, a former member of the Punjab Dairy Development Board. Once the animal is infected with the disease, the milk yield drops by 30 per cent, he says, adding that nearly 10 to 15 per cent of the cows in the state have this disease.

The state government should immediately give compensation to the affected farmers, demand dairy farmers. Daljit Singh Sadarpura, president of the Progressive Dairy Farmers Association, says dairy farmers are already in distress. “Now, cows too are dying. This disease has caused a massive loss to both small and big dairy farmers,” he adds.

After the initial slow response, the authorities have gone into action mode to deal with the situation. Apart from forming a group of ministers, 5.36 lakh doses of vaccine have been administered to cattle across Punjab.