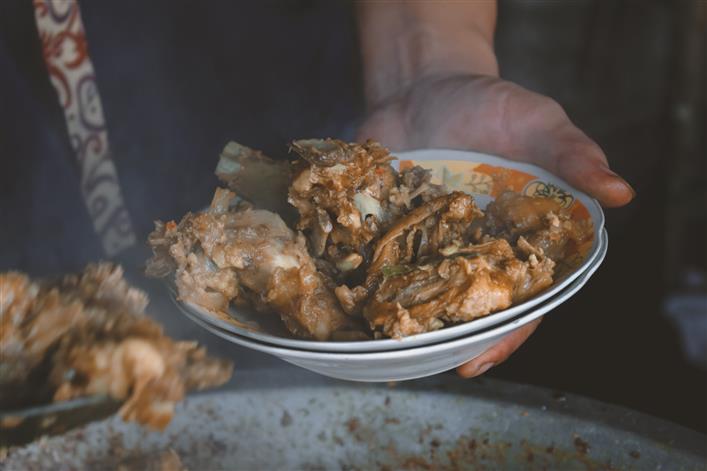 Some recipes intrigue with their name so much that you can’t resist till you have tasted them. We went through something similar when we first heard of Tadi Ma Gos from the Parsi repertoire. Here, mutton is cooked in generous volume of beer that imparts a distinct taste to it. The same is true for Charasi Gosht from Namak Mandi in Peshawar.

Our friends from the hills, who have long been addicted to the notorious weed, were thrilled when they heard of this stoned meat curry. But the excitement died as soon as they found out that not even a minuscule measure of grass or hash goes into it. Truth be told, we have been seduced by the dish. Forget the false promise the name makes, its simplicity renders it its special place. Apparently, it is named after a dhaba owner lovingly called Charasi Chacha. No one knows how he acquired this epithet.

The recipe makes do with minimum ingredients: mutton, fat, salt and tomatoes. No onions to be sliced laboriously or fried in scorching summer. Interestingly, even the tomatoes are added whole. All that this rugged yet delicate dish requires is patience. It has to be slow cooked, partly covered and partly without the lid. Stirring in the early stage is not too tedious. Later on, some strength is tested. And before we forget, purists insist that the meat should not be washed to retain natural flavours.

Mutton (preferably from the shoulder, cleaned and cut into chunky pieces) 1 kg

Heat the fat in a thick-bottomed pan; when it melts, throw in the meat. Add salt, cover and cook on medium flame for about 20 minutes. Stir once or twice in between. Salt releases water and the meat is cooked in its own juices.

After 20 minutes or so, add the tomatoes. Cover and continue to cook for another 30 minutes. Do not panic about the meat scorching and sticking to the bottom of the pan. But if you are the nervous type, uncover the pan after 20 minutes to assure yourself that the tomatoes have been reduced to pulp and have also added sufficient moisture to the dish. However, if you are itching to exert, mash them a bit more.

Tastes great with roti and parantha or on a bed of rice!