Chinks in the armour 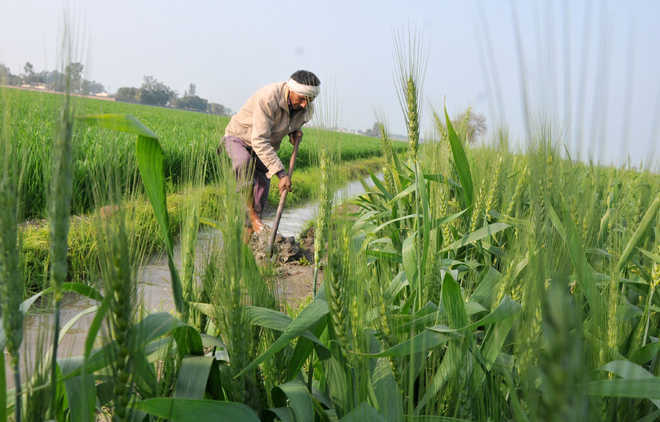 For years, the Minimum Support Price (MSP) system for crops has benefited farmers in north India through guaranteed income for their produce. - File photo

FOR years, the Minimum Support Price (MSP) system for crops has benefited farmers in north India through guaranteed income for their produce. No wonder the system is held sacrosanct by farmers, politicians and policy-makers in this region. Even the slightest attempt or talk of tinkering with the MSP meets with stiff resistance from the farmers and the politicians who rely on them for electoral support.

The nearly five-decade-old system of MSP has contributed to the country attaining food security — at least in the staple foodgrains — besides making agriculture economically sustainable for farmers. It has helped the country come a long way from the mid-1960s, when India did not have enough foodgrains to feed its then 49 crore population, and 10 million tonnes of foodgrains were imported from the US. “The MSP regime has proved to be very beneficial because it has spurred farmers to grow crops with a guaranteed price,” says BS Sidhu, Commissioner, Agriculture, Punjab.

Over the years, however, the increase in MSP announced by the Centre before each crop marketing season has been rather low. This has contributed to high rural indebtedness as input costs in agriculture keep rising and the MSP announced by the Commission for Agricultural Costs and Prices (CACP) is minimal, thus squeezing the income of farmers. Sidhu says the system of calculating the input costs while fixing the MSP requires a relook. “The farmer should be treated as a skilled worker and the capital cost of land should be included. This will make the MSP more remunerative,” he adds.

Besides this inherent weakness in the MSP model of capping the income of farmers, it has also led to regional disparities as the regime is successful only in states having a well-developed agricultural marketing system. In most states, the crops are not being bought at the MSP as FCI intervention there is minimal and focused largely on Punjab and Haryana. Sukhdev Singh Kokri Kalan, general secretary of Bhartiya Kisan Union (Ekta Ugrahan), says the MSP regime is often targeted for helping farmers of only a few states and those that grow only wheat and paddy. “To ensure that it benefits all farmers, it should be made legally binding on all to buy crops at the announced MSP,” he adds.

Balbir Singh Rajewal, who heads another faction of the BKU, says not only should crops other than wheat and paddy be bought at the MSP, but government should also encourage the processing industry for these other crops. “Earlier, pulses like moong and urad were cultivated here and we had small dal polishing units in Jagraon. Farmers stopped growing these because against the MSP of Rs 6,000, they would get just Rs 2,500 per quintal. Farmers found these non-remunerative and stopped growing pulses, which also led to the closure of these polishing units,” he laments.

Umendra Dutt, executive director of Kheti Virasat Manch, says the monoculture supported by the MSP regime has led to the destruction of agricultural biodiversity and massive consumption of pesticides. “If buying of other crops at the MSP is ensured, we would become self-sufficient in all crops,” he says.

Noted agro-economist MS Sidhu says though the MSP regime is sacrosanct, there is a need to increase farmers’ income by making them move to non-farm activities along with farming. Also, he says, it is time for value addition in agriculture by promoting food processing.

With the MSP regime being primarily restricted to wheat and paddy, this has led to monoculture, where only crops having a buy-back guarantee are being cultivated by farmers. As a result, the country has ample stocks of wheat and rice, but has to frequently import pulses and oilseeds.