The sharpest challenge to the network of privilege and order comes from young women students. They seem to have effortlessly made the connection between patriarchy at home and the regimes of domination in the universities that rob them of the ability to be full citizens 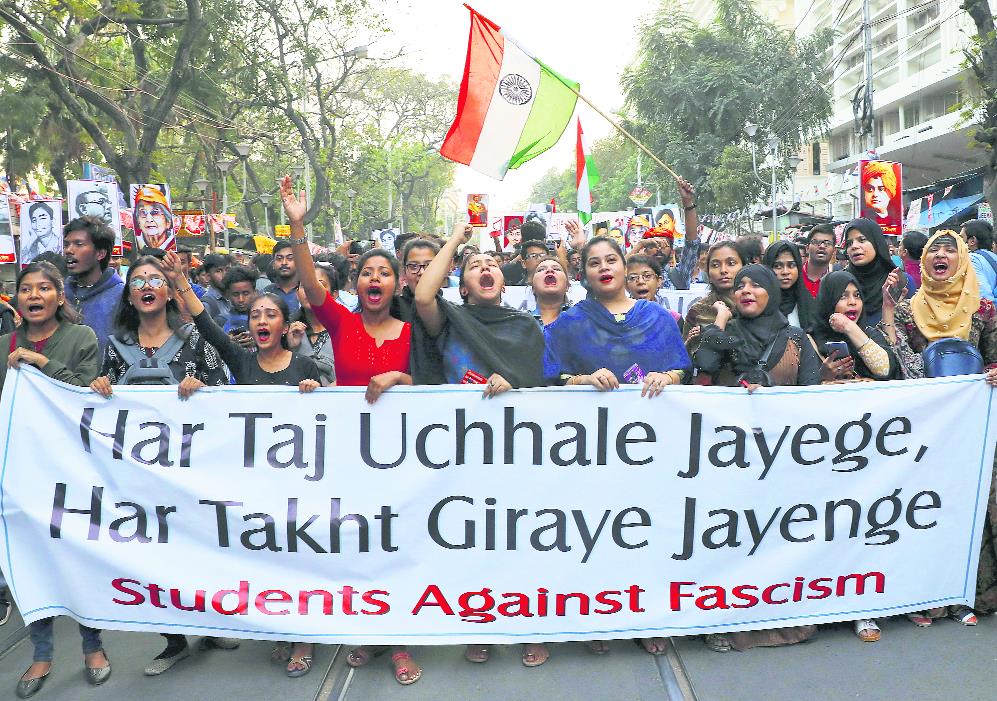 Bullies, barricades and bullets — young women across India are braving the might of the state on the roads, the violent trolls online, the repressive university administration and hostile neighbours and PG owners in their communities. And yet, protests across India against the Citizenship (Amendment) Act and the accompanying NRC and the NPR continue to be led, organised and enlivened by women — old and young. It is a fact that this has surprised many, even as it has resulted in violent and misogynistic reprisal from the law-enforcing agencies. The use of foul and sexually explicit language to refer to the young women protesters, and the deliberate hitting by the police on the private parts of the women students are by now well known and worrying aspects of the ongoing protests.

This assertion by women, especially young women, is a pattern discernible across many countries of the global south. These young women are not only asserting their citizenship and the right to dissent and protest as citizens, but also claiming public spaces while challenging good old-fashioned patriarchy, both at home and in public.

Stepping out to study, to work, to consult the doctor or just meet a friend is no ordinary proposition for most women —permissions need to be sought, explanations offered and constant surveillance of movement, conversations and friendships tolerated. Young women seem to accept it, or do they? Some 30 years back, young women students in an elite college of the University of Delhi had made the connection between fighting sexism and misogyny within the familiar college space and the freedom and liberty as citizens.

In this context, one of the most significant developments across university campuses in India is the ‘Pinjra Tod’ (break the cage) campaign. It began in 2015 at the Jamia Millia Islamia (the epicentre of the current student protests) to protest early curfew for women — as compared to men. ‘Pinjra Tod’ spread like wildfire across campuses. Young women on campuses are trying to question some of the so-called pillars of Indian society — family, religion and the nation state.

A new crop of young women on our university campuses sees the possibility of empowerment and transformation through higher education. They see education not just as a career-building mechanism, but as a democratising tool, and it is these young women who are standing up to the police now — on our campuses and at protest sites.

Women’s education was, in the years after Independence, often projected as the means for the creation of ideal mothers, and yet, women have used this education to transgress and transform their lives and democratise Indian society. More and more families are sending their daughters to pursue higher education, as the statistics show — nearly 47 per cent of students in higher education institutions today are women.

Public institutions of higher education in India are poised at a critical juncture and are undergoing a tremendous demographic transformation, resulting in greater heterogeneity of both the student body and faculty, with students belonging to the margins making their presence felt on campuses.

The sharpest challenge to the existing network of privilege and order comes from young women students across India’s leading campuses — they seem to have effortlessly made the connection between patriarchy at home and the regimes of domination and surveillance in the universities and hostels that rob them of the ability to be full citizens of this republic.

The response of the administration in a prominent women’s college of Delhi to a recent incident of large-scale sexual assault, accompanied by political sloganeering by men who scaled the walls, was characterised by indifference and even questioning and shaming of the women students. Young women students have joined the dots of casual misogyny, surveillance by the family and the university and hostel authorities, street harassment and the fury of the police at protests, thus enabling them to understand the collaborative working of both public and private patriarchies.

The violence that they are being subjected to is by way of punishment for daring to cross the proverbial Lakshman Rekha — the line that separates the ‘good’ woman from the characterless one who roams freely on the streets, laughs loudly and has strong political opinions.

These women students have established the linkage between a hyper-nationalist state and deep-seated misogyny that thrives upon creating a sense of victimhood and besiegement — besieged by those who espouse liberal, plural and egalitarian values. The restructuring of the Indian economy since the 1990s has inevitably resulted in socio-cultural transformations, including in the sexual mores.

Why the violent reaction

At the heart of the vicious and violent attack on women students on university campuses across India, is the fear that the articulate, politically active and sexually liberated woman would destabilise the familiar hierarchies. The foul and sexually charged trolling that women with strong opinions are subjected to is an extension of this anxiety.

Colleges and universities are complex institutions engaged in the education of future generations and have the potential to help India achieve the ideals of equality and social justice. These educational spaces are expected to assist in the creation of democratic citizenship and nurture a liberatory discourse for society at large.

Educational opportunities for women could prove to be the harbinger of such democratic change in Indian society. And yet, the spectre of violence limits these possibilities. There is a process of reconfiguration of power in Indian society that is underway — fuelled by decades of democratic and popular movements, including a diverse range of women’s movements — resulting finally in the dramatic scenes of resistance by young women, out in the open, late at night and on social media.

They are speaking for themselves and their voices are ringing out loud and clear.