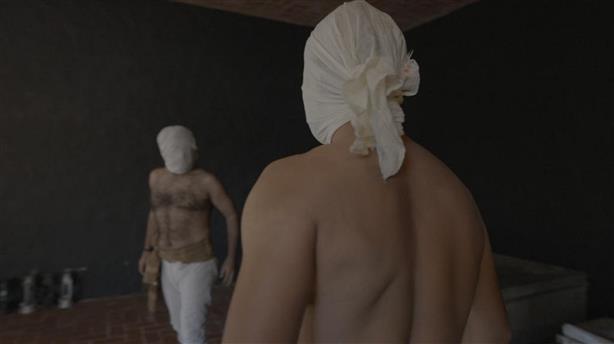 Artistes rehearsing for Neelam Mansingh Chowdhry-directed 'Hayavadana'. The play is all set to open Aadyam's upcoming theatre festival in Mumbai on February 4.

Neelam Mansingh Chowdhry first saw ‘Hayavadana’ when she was a student at the National School of Drama in the 1970s. Playing the lead roles were Amrish Puri, Amol Palekar, Sunila Pradhan and Dina Pathak; Satyadev Dubey was the director. Even as Chowdhry admits that she did not follow the play when she was young, she remembers being completely mesmerised. A few years down the line, she worked as a costume designer on BV Karanth’s adaptation. Today, four decades on, life seems to have come full circle as Chowdhry comes up with her own version of the play. It is all set to open Aadyam Theatre’s sixth season in Mumbai on February 4.

‘Hayavadana’ was written by Girish Karnad in 1971. It tells the story of two friends, Devadatta and Kapila, and their love interest, Padmini. The two accidentally swap heads, leading the characters to explore the complexities of identity and self. “When Bhoomija, a Bengaluru-based performing arts trust, approached me to do ‘Hayavadana’, I couldn’t say no. It is a lovely play, a very complex one,” says Chowdhry, who is fascinated by how animate and inanimate objects come together, making the play an interesting mix of the fictional, the real and the illusionary.

When Karnad wrote the play, he combined an indigenous folk practice like Yakshagana with Brechtian epic theatre. With Chowdhry, the play is set to assume an altogether different form. Punjab’s naqqals (traditionally travelling bards), her collaborators of three decades, will perform to the late BV Karanth’s music, rearranged by his protégé Amod Bhatt, who has recast the musical patterns and placements. “The musical instruments which were used in the songs were of a certain temperament, but we have used instruments like the saxophone, guitar, trumpets and xylophone,” says Chowdhry, adding that they were worried the music would appear dated but the younger lot of actors made an instant connect with the music; the music rolling in their heads, making them unable to sleep at night. “It gets into your system. Karanth was quite a master.”

An important departure is also the setting of the play. “Even though ‘Hayavadana’ could be called a modern classic, it is still within the mythmaking space. In our play, we have used the myth but given it a more contemporary thrust. Whatever Padmini says is rooted in that space and time, but says as someone would say it now. If she were to defy a man, or if she’s got to be deceptive, it’s got to be in terms of a value system that is existing today,” says Chowdhry, insisting that this has always been her way of looking at a text — whether it was ‘Phaedra’ or any other play, classical, Greek or Sanskrit, she might have worked on.

However, it is Girish Karnad’s ending which she has not been able to comprehend. In the play, Padmini becomes a Sati, but Chowdhry has tried to show that all the characters find their own space, “that separation is not the end of life”.

She also wonders if the ending has been read right. “I knew Girish Karnad very well. He was a complete post-modern being and an intellectual. But why he resorted to such a conventional ending is quite mysterious to me. Perhaps he was being tongue-in-cheek and making a satirical comment,” says Chowdhry, who has, in the past, directed Karnad’s ‘Nagamandala’, earning praise from the playwright himself, who told her after a show: “You have really understood my play.”

The cast and crew, chosen by Chowdhry and brought together by Bhoomija and Aadyam, an Aditya Birla Group initiative, come from across the length and breadth of the country. “The organisers wanted me to suggest actors who were part of the TV, film industry, but I wanted actors who could understand my language of working.” So, there is Ruby who worked with Chowdhry at Bharat Bhavan in the mid-1980s, actors she worked with at the NSD a decade ago and students from the Department of Indian Theatre, Panjab University.

Scenography is by Deepan Sivaraman, one of India’s best. Chowdhry says his imagination is so fantastical, it scares her. “I am so used to working with no money, no set. We, at The Company, always think of ourselves as a travelling group — how you can fold, pack up in trunks, go in trains or take it on a flight. But Deepan belongs to a different scale of imagination.”

And she can’t thank Aadyam and Bhoomija enough. “There are no constraints. It is very unusual to have a funding body that makes everything easy, available and convenient for you,” says Chowdhry, for whom this is the first commissioned work and a completely new journey. “It is amazing that at my ripe age I should be given such an offer. Kabir, my son, asked how I felt and I told him, ‘I am feeling like Sanjay Leela Bhansali!’”