Create a sustainable pathway for farmers

While attracting private capital investments in production, processing and marketing of high-value agriculture, the associated adverse socio-economic implications must be avoided.

On the whole, a more comprehensive strategy consisting of enhancing public expenditure on agricultural research and education, processing, marketing infrastructure including cold chains, market intelligence and capacity-building of farmers is required.

Last year, Parliament enacted the Farmers’ (Empowerment and Protection) Agreement on Price Assurance and Farm Services Act, 2020. It is supposed to empower farmers to get engaged with upgraded value chain partners in a fair, transparent, mutually agreeable and remunerative manner to enhance their income by reducing marketing risks. It is assumed that the private sector will directly enter into contracts with the farmers, ensure better prices, encourage diversification to high value crops and raise farmers’ incomes substantially.

The passage of this Act has generated intensive discussions. The supporters claim that contract farming has been successfully going on since long in Punjab, and this Act will give further fillip to it. Others are of the view that these claims are exaggerated except in those cases where the government and/or the cooperatives are playing an important role. The story of contracts involving corporates is dismal, which indicates that the positive assumptions on which the Act is based will not hold good on the ground.

In a broader sense, we may say that there is contract farming for paddy and wheat. The contract is between farmers and the Food Corporation of India (FCI) on behalf of the government, and it has worked with the highest degree of effectiveness. Of the total production of around 365 lakh tonnes of paddy and wheat, almost 80 per cent is procured at the pre-determined Minimum Support Price (MSP) without any discrimination among farm-size categories. There is a similar mechanism in cotton, wherein the Cotton Corporation of India (CCI), on behalf of the government, enters the market as a buyer whenever the prices fall below the MSP. The procurement by the CCI helps to restore the prices and thereby checks to a large extent farmers’ exploitation by private players.

In sugarcane, there is a provision of State Advised Price (SAP), which is fixed by the government. All sugar mills are legally bound to pay SAP to the farmers. Further, there are sugar mills in cooperative as well as private sectors which create competition. Despite issues of overdue payments to be made to the farmers, this contractual arrangement has worked reasonably well.

Contract farming by corporates was started in Punjab in the 1990s with PepsiCo India Ltd for potato and chilli. Other noted private players have been Nijjer Agro Food Ltd, United Breweries Ltd, Satnam Overseas, Amira India Food Ltd and Sukhjit Starch dealing with crops like tomato, chilli, barley and basmati. It is noteworthy that the area under contracts with these companies is limited and has not shown any significant improvement over time. Thus, the claims about effective contract farming involving the private sector are not tenable.

Contracts involving the government and/or cooperatives are working effectively on quite a large scale, are more inclusive and have ensured relatively better prices to the farmers for their produce. Private companies have never reached such a scale of contracting in any crop or commodity. Farmers are initially lured by the high prices of the produce. But once they opt for an expansion of area under the contracted crop leading to enhanced production, the farmers are offered, on many occasions, lower than the agreed prices by raising quality concerns without realising that not only quality but also the yield of agricultural produce are dependent on unpredictable environmental factors over which the farmer has no control. Often, the promise of higher profitability to the farmer falls flat, discouraging him from continuing the partnership with the contracting companies. Contract farming by the private sector is also accused of mostly favouring the medium and large farmers and being far from being inclusive. 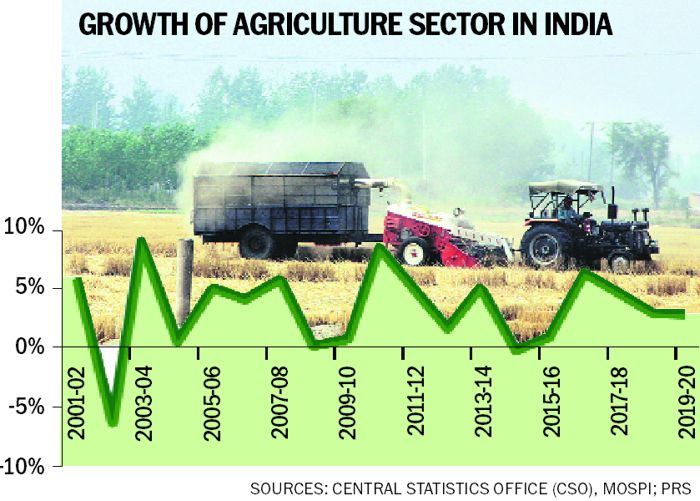 There is no doubt that Punjab is stuck in the paddy-wheat cycle and urgently needs to diversify its cropping pattern to conserve natural resources, most importantly water, and ensure sustainable development of agriculture. But this must not be done at the cost of the livelihood of farmers, who already fall in the lower stratum of society. The paddy-wheat cropping system is more remunerative than alternative field crops. Besides assured marketing at remunerative MSP, paddy and wheat have higher yield potential, better stability of performance under climate volatility and their cultivation is mechanised.

The Act on contract farming will perhaps not be able to deliver significant results as are being promised. For creating a sustainable pathway to contract farming on a scale required for replacing paddy and wheat by more profitable crop options, the government-supported mechanism like the one for cotton, if not as in the case of paddy and wheat, and/or cooperatives as for milk and sugarcane are a must. This has to be aided by large-scale involvement of farmers’ aggregators like farmer producer organisations or companies. There is also a need to legally ward off the apprehensions of the farming community that big corporates may demolish the established input and output market channels in the long run and start dictating terms to the poor farmers who have little bargaining power in the market. Thus, while attracting private capital investments in production, processing and marketing of high-value agriculture, the associated adverse socio-economic implications must be avoided. On the whole, a more comprehensive strategy consisting of enhancing public expenditure on agricultural research and education, processing, marketing infrastructure including cold chains, market intelligence and capacity-building of farmers is required.

The authors are Vice Chancellor and Head, Dept of Economics and Sociology, respectively, PAU, Ludhiana