Daastan-goi: Holding an audience in thrall : The Tribune India

Daastan-goi: Holding an audience in thrall

The old-time art of storytelling might have faded but daastans are still around, and these are being told by new and eloquent daastan-gos 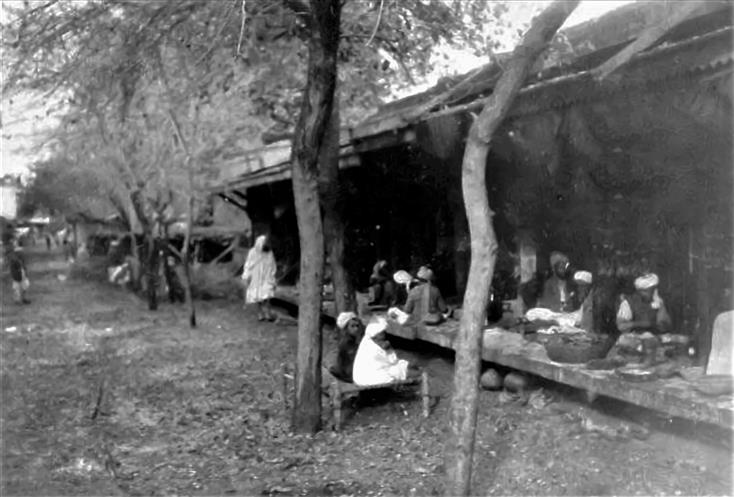 An old photograph of the Qissa Khwani Bazaar in Peshawar, 1903.

The man who wins such bliss

What more had Jamshed?

— Mirza Ghalib, after hearing a richly-told, night-long, daastan on the steps of the Jama Masjid, 1861

The taste of a tale lies in the telling

IT is unlikely that many today, at least here, will have heard of a place in Peshawar — the Qissa Khwani Bazaar, ‘Street of Storytellers’ — unless, of course, for different reasons, for this was also the site of a massive firing by British forces during our freedom struggle. But the bazaar has a long, very long history. Here, around Peshawar, used to land caravans of travellers and traders from all over Asia. It lay on a busy crossroad and it is said that the day’s travel and business done, men would make their way to the bazaar for entertainment, at least of the aural kind: listening to long tales stretching into the night, told with great relish and much embellishment by celebrated professional reciters. The tale ending — at least the part of it for that evening, for these were unendingly long qissas that could not possibly be told in one evening — the listener would place a few coins on the floor of the ‘teller’s shop’ as payment and leave, possibly for the next evening, when it would begin again: “Khuda Badshah; hamara tumhara khuda badhshah; zameen-o zaman ki panah Badshah …” Or, going on to a princess who was simply more than a beauty: “Zulmaati ki dukhtar-e buland akhtar, mallika-e taa’us, pari chehra; nihayat haseen, sehr main bhi zabardast, nasha-e sharaab-e husn se mast, jo apne qasr mein jalwa-farmaa thi…”

Nothing of that has survived. The street bearing that name is still there, but no tales are being told there: it is a noisy, bustling street filled with lurid signboards, pedestrians running into tongas and bicycle-rickshaws, and horns blaring out of rickety vehicles. The only relic of that old street that I was able to find is a frayed, faded photograph taken in the year 1903, showing a few shops with thatch-roofs along an unpaved street with heavily turbaned men sitting inside them. But even this was taken much later than the glory days of the storytellers. That delectable old world is gone, completely gone.

But not quite, I must correct myself. For the old daastans are still around, and they are being told by new and wonderfully eloquent daastan-gos. We owe nearly all of it — this fortunate revival — to that remarkable man of letters and ideas, Shamsur Rahman Faruqi, whom the world lost just two short years back. He had a very clear idea of what telling a daastan used to, and still could, do: to lift the listener up and transport him into a different world by the sheer telling of it. The lilt of language, words coming tumbling one after another in breathless succession; the chiselled accent — woh itradaan sa lahza, as Bashir Badr put it — that makes them gleam like silver objects seen from a distance under the sun; the dramatic but barely perceptible modulations of voice; the way a single word can be made to soar and expand or to become empty of all meaning in a trice; alliteration, expansion, fragrance, nuance; everything rolled together. In his undimmed view, it was time to experiment; at least to try and infuse life into a lost but noble art. He found takers for his idea; some from within his own extended family, including the markedly gifted Mahmood Farooqi for whom he was ‘bade abbu’, others from a circle of eager votaries. It worked: the time was ripe and the talent available immense. The experiment turned into a daastan in itself: today, there is one everywhere, it would seem.

There certainly was one in our own city, Chandigarh, last month. Invited privately by the newly formed Elsewhere Foundation, Mahmood Farooqi came to town and turned, by a single solo performance, an evening into sheer enchantment. It really is magical. There is no set or background on the nearly bare stage: just a simple low divan covered in pristine white with two gao-takiya, draped in white, bolsters, placed on it; no text is read, everything, every single recited word, coming from memory or from instant invention for an hour and a half or more; there are no light ‘effects’; no prompts are in or out of sight for none are used; no other character appears, whether as a foil or as collaborator. It is just recitation.

For this evening’s presentation, Farooqi chose an unexpected theme — to call it a text would evidently be wrong: the story of Karna, that noble but little understood character from the Mahabharata. He could have chosen from any of the well-worn daastans — they are all there, the perennial favourite ‘Daastan-e Amir Hamza,’ ‘Qissa-e Chahar Darwesh’, ‘Tilism-e Hosh-ruba’, for instance. As he proceeded, clad in a chikan-work angarakha, shara’i-topi on head, telling the somewhat tragic story excerpted from a Sanskrit epic, in his own fluent manner, one realised that he chose the theme because he has the talent to showcase it. Sanskrit is obviously not his first language but words or shlokas picked from it he pronounces to perfection; the tale is told in Urdu, of course, but with a generous sprinkling of Persian, even on occasion Arabic; couplets of Mir Taqi Mir come floating suddenly in; the story is filled with war and tumult, but every now and then, in the telling of it, questions are, softly, approached: ‘what is dharma’; ‘where does justice lie’; ‘is truth one and indivisible, or are there many truths’? But, throughout the narration, which is not linear at all made up as it is of episodes, scraps of description and dialogue, the daastan-go keeps sitting, shifting his stance a little when needed, taking a sip of water from the silver rakabi that is placed within reach, making the minimal of gestures, his wonderful voice falling and rising.

But what he is able to conjure up is a complete picture in the mind of the listener: one can almost see men conversing, counsel being shared, angry exchanges, chariots racing, swords flashing and arrows singing in the air, intrigue, trust, affection, puzzlement. Someone said once that telling a tale is to set a river into motion. Here that river was seen in serene flow, now turning into a trickle, now a thin stream, now an unruly torrent. There is barely a moment to catch one’s breath as one sits listening: completely entranced, transfixed, at this wonder of an experience.

Reluctantly, one gets up and leaves at the end of it, beginning secretly to wait for the next event. Guzashta se paiwasta, as serialised stories in Urdu journals used to promise.