Chinese manjha, which was banned by the National Green Tribunal in 2017, continues to be sold and used, causing serious injuries and even fatalities 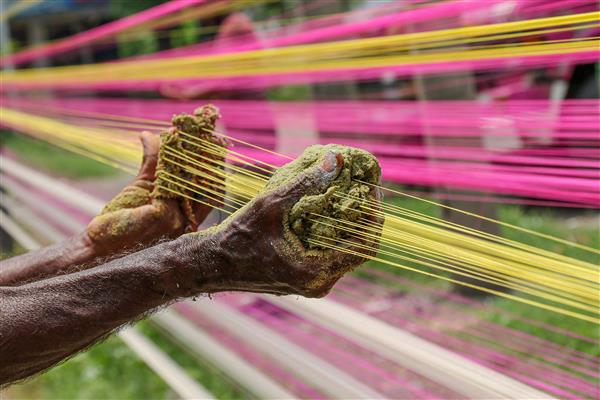 The abrasive kite string is much in demand during festivals like Makar Sakranti and Basant Panchami, which see kite-flying reach its crescendo. PTI

KiteS swarming the skyline is a standout feature of the Makar Sakranti celebrations, but seven-year-old Pihu of Preet Nagar in Jalandhar has not been able to gather courage to step out of the house and watch the kite-flying duels in her neighbourhood. The festival is a scary reminder of the traumatic experience of February 7, 2021, when a sharp manjha (abrasive kite string) slashed her face while she was riding a scooter with her father, Mukesh Kumar. “Pihu was not even able to raise the alarm when the dor (kite string) pierced her face, barely missing her eyes. She got 15 stitches on her face. It’s been more than two years, but even today tears roll down her eyes when she looks in the mirror,” says Mukesh.

Ravideep Singh (45) of Agwar Pona village in Jagraon, Ludhiana, too, was a victim of the banned Chinese manjha, popularly known as gattu. He sustained serious injuries while he was returning on his scooter from his restaurant last week. “A knife-like kite string pierced my body and face. As I tried to remove the string with my left hand, it cut my finger and my forehead. I started bleeding profusely and had to be rushed to the hospital where I received more than 50 stitches. The string also cut my eyebrow,” he says.

Srijna Vedi (53), a college lecturer in Amritsar, suffered a similar fate last year while driving her Activa when her left eye was struck by a dangling Chinese dor. “It took several days to recover from the surgery on my eye. The incident took place on the main road which has many educational institutions and a lot of students commute everyday. The administration needs to put a stop to this menace,” she says.

For Daksh Giri (6) of Ludhiana, Ashleen Kaur (4) of Ferozepur and Gulshan (12) of Kotla Nihang, Ropar, the injuries that the deadly Chinese manjha inflicted on them, slashing their throats, proved to be fatal.

While arrowroot (starch), rice glue, tree gums and finely powdered glass-coated cotton strings have been used in kite fights for long, recent years have seen enthusiasts using the strong polymer strings, popularly known as Chinese manjha, to cut the dor of the rival’s kite. Though the unbreakable string is made in India, it is called Chinese because its main ingredient, a synthetic polymer called polypropylene, comes from China. The low-cost non-biodegradable string is made from monofilament fishing lines, which are also used for making nets and bags. Sold as ‘gattu’, the hard-to-break string is made by melting and mixing polymers, which is then coated with glass. The string is a hit during kite-flying festivals like Makar Sakranti, Basant Panchami and Uttarayan, which see many competitions across the country. Its low cost compared to the traditional cotton dor adds to its popularity. It comes at one-third the cost of cotton kite string.

The deadly Chinese manjha was banned by the National Green Tribunal (NGT) in 2017. It can no longer be sold, manufactured or used. Anyone caught violating the ban risks being imprisoned for five years and fined Rs 1 lakh, or both. The use of the banned manjha attracts punishment under Section 188 of the IPC. The deadly string, however, continues to be sold and used widely, lethally injuring many who come in its path.

According to Dr Sanjeev Uppal, former head of the Department of Plastic Surgery, DMCH, Ludhiana, “Though incidents caused by the banned string are not as high as those of burn injuries during Diwali, its victims have life-threatening injuries. Unlike a cotton dor which has no continuity of fibre and can break easily, this plastic-like string becomes razor sharp when stretched. Severe injury can be caused if it pierces the skin, especially the face and neck. The ban is there but to what extent will the administration control things? The responsibility lies with the citizens. Parents need to ensure that children are not buying this banned string.”

“But, where is this manjha coming from, despite the ban?” asks an angry Ram Prakash Gandhi (39), a resident of Krishna Nagar in Amritsar, who got nine stitches after this string got struck around his leg while he was driving his scooter on way to office, last February.

There has been a serious lapse on the part of states in the implementation of the ban, says HC Arora, an advocate of the Punjab and Haryana High Court, Chandigarh. Arora, who has filed a PIL seeking complete implementation of the ban, says the banned manjha is being openly sold despite repeated warnings. “Stricter measures need to be taken to curb this menace,” he says. The Punjab DGP has issued directives to book offenders under the non-bailable sections of the Environment Protection Act and the Wildlife Protection Act, which can attract a punishment of more than three years, he says.

A Jalandhar kiteseller, on condition of anonymity, reveals that the selling of Chinese manjha been going on unabated in the city’s Attari Bazaar, Sheikhan Bazaar and near Kishanpura market areas. “It is mostly sold to people known to the sellers.”

A young kite enthusiast says he bought three spools of Chinese string from a known kiteseller weeks before the festival. “Each cost me just Rs 225. If I had gone to purchase it around Makar Sakranti, the cost would have gone up to Rs 800 per spool or more. Most of the large kites are flown using the banned Chinese string.”

Amritsar kitemaker Jagmohan Kanojia, who has many honours to his credit, including flying 1,100 kites on one string, says the ready availability of the Chinese manjha has ruined the business of people like him. Traditional games like kite-flying have already been hit due to alternative entertainment options, he adds. “Earlier, kite-flying would start after Diwali and continue till Basant. but now it is limited to barely two to three days. Most sellers stock the banned strings during Diwali when there are not too many checks on its availability.”

His friend, dor seller Pal Singh Palli, who has been in the business for the past 40 years, rues that the Chinese manjha has badly affected the business of traditional dor sellers like him. “The traditional Bareilly dor comes in the price range of Rs 120-Rs 2,000, depending on the length and strength of the string. The sharp Chinese dor, which is produced and manufactured in India only, costs Rs 500-Rs 800. We strongly urge the administration to take strict measures to check the sale of this unsafe dor, which is taking the charm out of this traditional game.”

The craze for kite-flying in Haryana has declined to a large extent. Kites are mainly flown during the Teej festival in the state. “Nowadays, children remain engrossed in smartphones, laptops, tablets and other gadgets, and don’t care much about our traditional games,” says Pawan Kumar, a resident of Hisar. Even around Teej, kites can only be seen in a few localities in the old towns, unlike earlier when barring the rainy season, the skyline remained covered with kites throughout the year.

According to Babu Lal, a shopkeeper, nearly 80 per cent of customers demand the Chinese manjha. “Preparing the desi manjha was very tedious but now it is not much in demand either,” he says. “The cotton dor sells between Rs 450 and Rs 500 per roll, while the Chinese string is available for Rs 250-Rs 300. Thus, a huge demand for it is forcing the shopkeepers to keep it in their stock,” says a kite-seller in Jhajjar.

Many cases of bird injuries get reported during and after the kite festivals. While recently, an endangered vulture was found dead after being struck with a Chinese manjha in a residential area at Majitha Road in Amritsar, a barn owl was rescued from another posh locality in the city.

“We rescue two to three injured birds every day with the help of the fire department,” says Dr Rohan Mehra, who runs a non-profit Anti-Crime and Animal Protection Association in Amritsar. “Most of the birds injured due to the Chinese manjha do not survive. At present, the offence is bailable and allows the offenders to escape easily,” says Dr Mehra.

The two-day Uttarayan festival in Gujarat, held from January 14, too, witnesses many human as well as bird injuries due to kite-flying. Last January, Ahmedabad-based Jivdaya Charitable Trust (JCT) rescued 4,100 injured birds while it found 3,000 injured birds stuck in the remnants of kite strings in February last year. According to Gira Shah, managing trustee of the JCT, “Kite-flying starts many days before the actual festival. We rescued close to 800 injured birds in the first week of January. There are many bird sanctuaries and thols around Ahmedabad, which are visited by migratory birds since this is their nesting period. Barely do the little ones in their colonies start flying than their wings get cut.”

The sale of Chinese manjha has been going on unabated despite awareness campaigns and measures by the local administration. In view of the festival season, strict orders have been passed throughout Punjab to check the sale and purchase of the banned kite string. The Ludhiana Police Commissionerate recently roped in two child artistes for social media videos encouraging kite lovers to avoid using the banned string, besides ordering strict action against those selling the banned manjha. According to the Amritsar police, it has made 145 arrests and recovered 4,071 banned manjhas in the past five years

“Five persons have been booked in the last fortnight and over 1,200 sacks containing this synthetic thread have been seized,” says Kanwardeep Kaur, SSP, Ferozepur.

In the last two years, the Jalandhar police have registered 30 FIRs and arrested 32 persons for selling the banned kite string. A total of 1,040 gattus have been recovered, including 360 in a recent raid, says DCP Investigation, Jaskiranjit Singh Teja.

Acting on a petition filed by Gandhinagar-based Pankaj Buch, the Gujarat High Court rapped the state government for complacency in the implementation of the ban: “A series of raids as well as awareness campaigns before Uttarayan have ensured that the banned kite string is not being openly sold now. But until the local manufacturers are targeted, this menace cannot be checked. Meanwhile, it is every citizen’s responsibility to make sure that this life-threatening thread, which is harming birds, humans and environment, is not used. Only then can the festival be enjoyed in its true spirit.”