Self-taught, she promoted sustainable architecture in Kangra valley when the concept had long been forgotten. Her buildings in mud, bamboo and stone seem to grow from earth, symbolising revival of traditional practices. Didi passed away earlier this month, aged 92 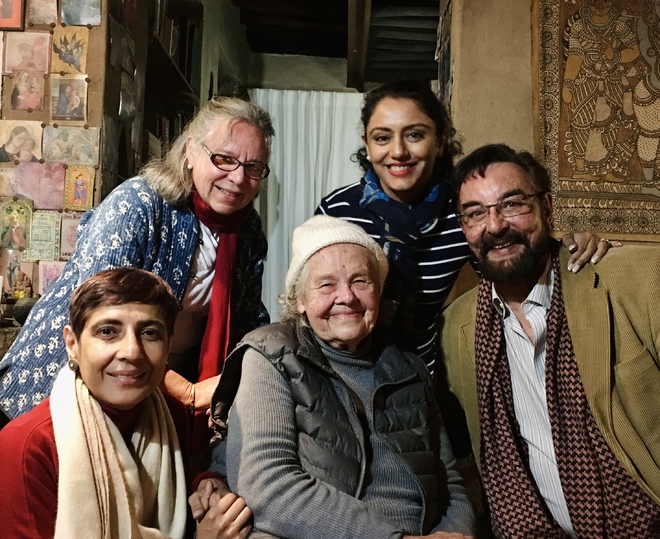 It was in the early 1990s when my wife Ritu and I first met Didi Contractor. Common friends from Dharamsala introduced us and we paid her a visit at her home in a traditional Kangra-style mud house in the artists’ colony at Andretta. Already in her early 60s, she radiated a commanding presence that filled the room. She had retreated from her busy life in Mumbai to the relative solitude of Kangra valley to devote herself fully to a life of spiritual contemplation. What struck us on that first meeting was the mischievous glint in her eyes and her wide-ranging knowledge of everything from contemporary art and architecture to Hindu philosophy and astrology. 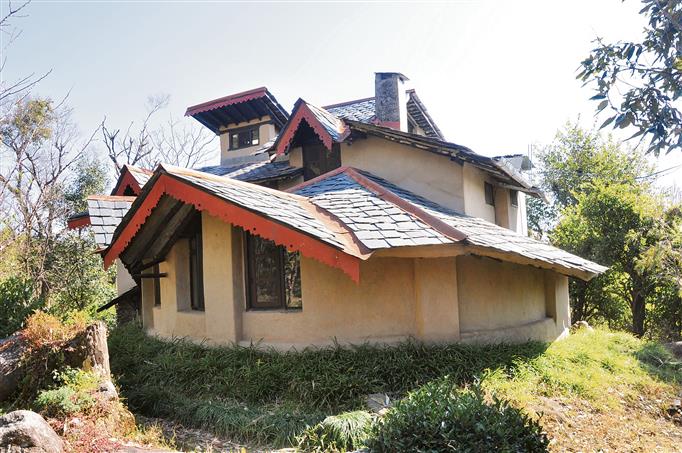 Soon afterwards, we acquired a piece of land in Sidhpur near Dharamsala and decided to build a small home. By then, Didi had embarked on her mission as a champion of low-waste and low-cost architecture using local materials and techniques. We were overjoyed when she agreed to design our home. At the time, my wife Ritu Sarin and I were still living in London and after an initial meeting to discuss our requirements, most of our communication happened long-distance via faxed messages and drawings. Her buildings married mud bricks, stone, bamboo and slate in the traditional Kangra style but with a generous infusion of modern aesthetics and amenities. Didi was essentially an environmentalist and it was her growing concern over the damaging ecological impact of modern construction practices that spurred her to actively propose an alternative architectural response. Didi’s buildings, in sharp contrast to the ugly brick-and-concrete housing with their shuttered garage fronts that blighted the landscape, co-existed harmoniously with their natural surroundings. 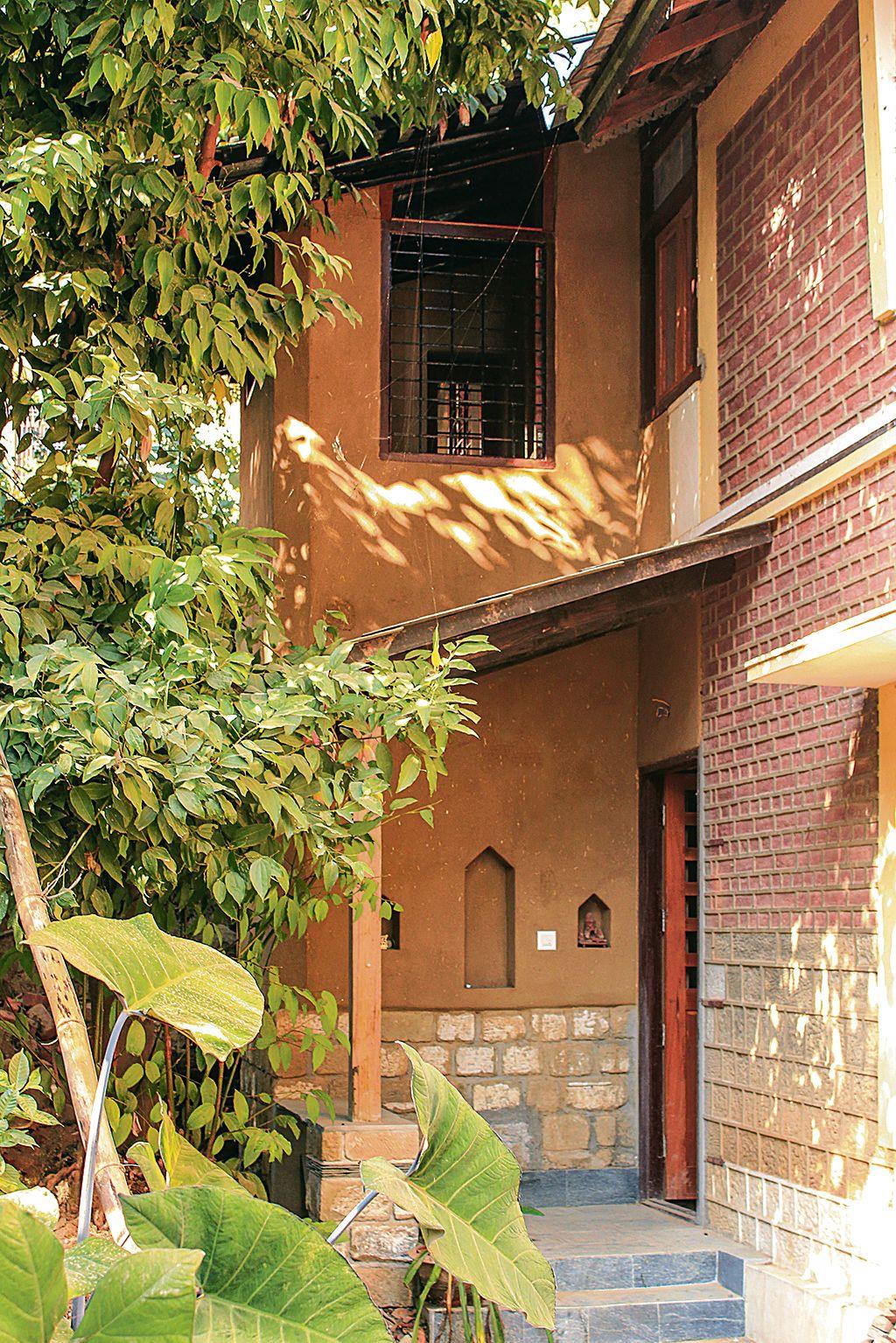 By the time we moved back in 1996, the shell of the house was already up. Didi had relocated to nearby Sidhbari where she had built her own home and was engaged in a number of building projects in the area, including her first institutional assignment, Nishtha Rural Health, Education & Environment Centre. This once sleepy part of Kangra valley, close to the cosmopolitan centre of McLeodganj and blessed with the presence of the Dalai Lama, became home to a diverse group of residents drawn here by their shared interests in spiritual pursuits, environmental concerns and alternative lifestyles.

At the building site, Didi was an imposing figure, a whirlwind of energy, exhorting carpenters, stonecutters, mud-brick makers and sundry labourers to work to her exacting standards, any deviation from which would have to be immediately rectified. She was precise in her orders, delivered in her accented but fluent Hindi, and there was no doubt that the local craftsmen were in awe of her and not a little afraid of her sometimes fiery tongue! Didi took great pride in overseeing the smallest of details. She took particular care to design each and every window and door frame. She sketched out the geometric motif that the floors would take. In our living room, she spent several long hours handcrafting a fireplace that bore the hallmarks of her aesthetic, gentle curves that accentuated the organic quality of clay. Her sense of fun manifested itself in the delightful alcoves and unexpected stonework that she loved to insert into her buildings. Didi was always conscious of how her buildings would evolve and how their symbiotic relationship with their residents would change over time. For instance, she took particular care to make sure that the staircase to the first floor of our home was gently sloped with wide steps because she wanted to ensure that it would not prove a challenge when we grew older.

Didi was in favour of keeping everything small. The length of a standard beam of wood — 9 feet — dictated the size of a room (although later, she became more flexible on this point). A kitchen should be small enough, she would say, so that when you grow old, you can sit in one place and still be able to do all your work. We had our disagreements, especially about sizes of rooms and placement of windows, and Didi could be a formidable opponent if you didn’t see eye to eye with her! But in the end, none of this mattered. Nearly 26 years have passed since we moved into our home and, as Didi predicted, we grew into the house and it became an extension of ourselves. Its minor aberrations merged with the overall handmade quality of the house and became integral to its unique and eccentric charm. In retrospect, it feels like a privilege to have been there with Didi almost at the beginning of what would go on to become a prolific and inspirational career.

Didi’s work as an architect was so much a part of her world in the Kangra valley that it was a shock when we occasionally glimpsed revelations of her former life. One year, at the annual Dharamshala International Film Festival (DIFF) that Ritu and I started in 2012 (Didi was an avid film buff and a regular visitor), the award-winning filmmaker Anand Patwardhan was in attendance to present a film. He was overjoyed to see Didi. It turned out that they knew each other from the early 1970s when Didi still lived in Mumbai. He recalled, “Didi was very literally a force of nature! I know her from childhood as her family and mine were family friends. My mother, who was a potter, had an exhibition with Didi, the painter, at Jehangir Art Gallery. For years, we would go to Juhu every week to spend time with the Contractors and the children too became close friends. Their home was a drop-in centre for all hippies and intellectuals and seekers and Didi was the ever generous focal point and host.”

Kabir Bedi was another frequent visitor to Didi’s home in Mumbai. A few years ago when he came to Dharamsala, Ritu took him to visit Didi and they spent a happy afternoon together, reminiscing about old times. He reminded Didi that she had been instrumental in connecting him to his role in the hugely popular Italian television series, ‘Sandokan’, that made his name in Europe. Another year, filmmaker Shabnam Sukhdev came to DIFF with her biographical documentary, ‘The Last Adieu’, about her father, the iconoclastic director S. Sukhdev. It turned out that Sukhdev was yet another of that generation of young artists who had found welcome refuge at Didi’s home. Shabnam was so touched to meet Didi and see her architectural work that she ended up coming back to make a film about her, ‘Earth Crusader’.

“While making a film about her ideology, I realised that Didi was a living legend,” says Shabnam. “Her commitment to sustainability manifested not only in her work, but also in her spiritual way of life. Towards the end of my film, she matter-of-factly states: ‘If the physical body were to say, I give up, it would be okay as far as I’m concerned… I like the fact that when a mud house breaks down it doesn’t leave useless rubble; so at least my houses will make nice vegetable gardens when somebody’s through living in them.’”

Architect and conservator Dhruv Sud, who apprenticed with Didi for a number of years, says about her work: “Didi Contractor’s legacy has been to demonstrate the astonishing beauty, authenticity, wisdom and soul that is possible through frugal means and social conscience. Her life and work sought to observe as much as create art in the everyday texture and rhythms of the Kangra landscape.”

Didi’s long life was a rich mosaic of ever evolving interests and directions, always underpinned by a deep spiritual yearning and a passionate concern for the environment. We were fortunate to have been a small part of the final phase of her journey, when everything she believed in and strived towards came together in a sustained burst of imagination and creativity. She may have left us in person but her vision, her abundant energy and the generosity of her spirit live on in the buildings she created. More than anything else, it is when local villagers visit our home and express delight and amazement at the way familiar materials and building methods (those that they themselves have abandoned) have been revitalised and repurposed in a contemporary context that we understand the significance of Didi’s mission and legacy. A newer generation of architects will hopefully build on the foundations she laid and continue to demonstrate the viability, urgency and desirability of the alternative and holistic building practices that she so fervently believed in.

Her Concerns about ecological cost

If we had to pay for it, we wouldn’t be able to afford the sunset.

Society at the moment is taking destructive turns and there has to be a deep level of change. The way we live now is not sustainable and is driven purely by commercial values. If you ask somebody what something is worth, the answer is always in monetary terms. Money in itself is not a problem but commodification of values and ethics is. However, the best things in life like beauty, air, love, sunsets and kindness can never be put up for sale. It is equally, if not more, significant when you earn satisfaction, when you know you have done the right thing.

In my work, I am more concerned with the ecological cost than with the financial cost. The financial cost concerns the individual rather than a collective. But we all share an ecological saving, and an ecological expense we all bear the brunt of. I am much more interested in the ecological economy, in sourcing materials and what harm they do, what effect they have on life. Also when you spend something it’s all at once. But ecological cost, your grandchildren and great grandchildren, (if any of them survive in the world as it is now being created by us,) will continue to bear the expense of what we are doing now.

— An excerpt from an upcoming book for young architects by Didi

An environmentalist is born