Dil mango more: Pushpesh Pant revels in the taste of the delicious fruit and its enticing varieties

It reigns over the fruit kingdom and not without reason. Pushpesh Pant gets a taste of mango’s enticing varieties 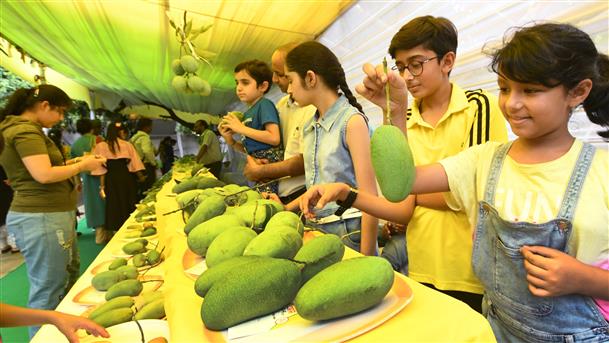 Visitors at the popular Pinjore mango festival, an annual event that was started in 1992 by Haryana Tourism and Department of Horticulture, Haryana, at the Mughal Gardens. Tribune file photo

There is general agreement among food historians that mango — amra or rasal — was ‘born’ (read domesticated) some 5,000 years ago in India. It is the Tamil manga that is the origin of the English term mango. The fruit is celebrated in ancient literature, Sanskrit plays and Pali Jataka tales. Buddha was once gifted a mangrove by a rich devotee where he could repose in peace. When mango blossoms sprouted, desires stirred in hearts of lovers. Amrai, or the mango grove, is the place for romantic trysts in countless folk tales. For all practical purposes, only it could be the National Fruit of India.

Over millennia, hundreds of varieties of mango have evolved or been grafted. Like roses, the work of gifted horticulturists has followed the whims of their patrons or their own fancies. The churning has been going on for centuries and about a dozen varieties have stood the test of time and emerged as perennial favourites, eagerly awaited every season. The earliest to appear in the market are sinduri and tota pari, named after the colour of their skin. Not particularly sweet or fragrant, they enjoy their brief moment of glory till more flavourful challengers overshadow them. Safeda has an attractive yellow skin and firm flesh that has succulence and pleasant mild sweetness. Suddenly, milk shakes and juices begin to taste refreshingly different with its arrival.

By the end of May, dussehri begins to ripen. These mangoes have an elongated, flat appearance and the best quality has very thin stone. The name indicates that the fruit has many beneficial properties and it relieves from 10 distressing conditions (dus + haran kari). The small village of Malihabad, 25 km away from Lucknow, is renowned for its mango orchards from where the best quality dussehri is sourced. For some aficionados, no other mango, not even hapus, comes close to it. It has very little fibre and is best enjoyed sliced.

Not much later, it is the turn of Banarasi langda from Varanasi to tempt us. In Bihar and Bengal, this variety with green skin, a firm body and a seductive flavour is called langda. Legend has it that there was a mango tree in the khankah (a building designed for gatherings/spiritual retreat) of a Sufi saint in Malda, renowned for its heavenly mangoes. Once a lame pilgrim from Banaras visited this place of pilgrimage to receive the saint’s blessing. He carried a seed and a graft with him to grow the same fruit back home. It’s difficult to verify the details provided in folklore, but what can’t be denied is that both langda and Malda varieties are worthy contenders for the top spot with dussehri.

Bihar has named Amrapali after the legendary courtesan who had renounced a life of pleasure to follow the Buddha and residents of the state consider it to be the best mango. It is a hybrid variety that has dussehri and neelam mangoes as its parents.

Those who dwell on the western seaboard refuse to concede that there can be any fruit equal to their beloved hapus, aka the Alphonso, named after a high-ranking Portuguese colonial official, Alfonso de Albuquerque. The story has it that someone brought a graft from Brazil and put it on a mango tree in Ratnagiri. It is believed that he was trying to create a variety that could be sliced cleanly and served at European tables. The rest, as they say, is history. Hapus is a delicate species with very thin skin that blemishes easily. The flesh is aromatic with a subtle, intriguing taste. It is the most preferred variety for use in ice creams, mango-flavoured beverages and juices. Another interesting thing about hapus is that it’s not sold by weight, but by the count. A single fruit may weigh between 250 and 400 gm.

In Gujarat, kesar, also known as Gir kesar, the traditional rival of hapus, is prized. It is grown in Gir, Junagadh, and more recently Kutch. It shares many qualities of Alphonso but has better shelf life and slightly lower cost than the hapus. The food processing industry is the principal market for its high-grade pulp.

Chausa, named after a village in UP, enters when other varieties are fading out. The die-hard supporters of dussehri, langda, Malda and hapus are constrained to cast a flirtatious glance towards the pile, knowing fully well that this is their last chance to enjoy the luscious fruit before the shelves are bare again.

Sindhu is a seedless variety that has been developed by scientists but has remained a novelty and has failed to carve out a niche for itself.

Southern India takes great pride in local varieties like Banganpalli that grows in Karnataka and the Andhra region. In Hyderabad, one encounters many ‘created’ varieties that combine the best qualities of different mangoes. Neelam, imam pasand, badami and gulab khas are just a few of these. In Haryana and western UP, paeans are sung of Rataul that drips irresistible juices to compensate for its ordinary looks.

Fazli is a late-ripening variety and usually signals the closing of the mango season. However, cold storages and easy imports have made the fruit accessible almost round the year. The prices may be steep, but late March through September-end, the green grocer has them on display to lure the well heeled.

Very good quality mangoes are grown in Bangladesh and some parts of Pakistan. Himsagar, harivanga or haribhanga and Gopal bhogh from Bangladesh compete with the Indian produce in the export market. Langda/Malda is immensely popular. In Pakistan, Rataul and chausa are the most popular varieties exported to the UAE and the USA. Ram kela is the variety of tart mangoes that is used for pickles and chutney in north India.

The ‘King of Fruits’ is enjoyed in a variety of sweet and savoury delicacies — in pulao, muzaffar ka meetha, curries, kadhi, desserts like kulfi, kheer, phirni — and beverages like the summer coolant aam panna. In the countryside in the Hindi heartland, unripe mango slices are added to arhar lentils and in Maharashtra, amras and amrakhand are greatly relished.

With over 1,200 varieties commonly grown, it becomes difficult to pick only one as a favourite. Finally, it is to each his/her own! One is reminded of great Urdu poet Ghalib’s words: Each mango has written on it the name who is destined to eat it!

1. Harivanga or haribhanga, cultivated in Bangladesh, is giving Indian mangoes a run for their money in global markets.

2. Kesar, also known as Gir kesar, is grown in Gir, Junagadh and Kutch, Gujarat. Similar to Alphonso, it has a better shelf life and is cheaper.

3. Ratnagiri Alphonso mango is commonly known as Ratnagiri hapus. The golden yellow fruit with a red tinge has a non-fibrous juicy pulp.

4. Malihabad in UP has the best quality dussehri, with a thin stone. It has many beneficial properties, relieving from 10 distressing conditions (dus + haran kari).

In the compound of the Circuit House in Chapainawanganj (earlier a sub-division of Malda district, now in northwest Bangladesh), a mango tree has received 200 grafts of different varieties, thanks to the enthusiasm of a District Collector and support from local horticulture department workers. Many drying branches have started sprouting green shoots and those who nurse the tree are confident that soon the tree will start yielding a crop of over hundred varieties of mangoes. They are eagerly awaiting the next mango season.

Ironically, the most expensive variety of mango in the world is Japanese, developed in the small town of Miyazaki some time in the 1980s. It has dark purple flesh that is seductively flavourful. It’s called ‘Egg of Sun’ due to its rich ruby hue. A farmer in Jabalpur has started growing these after he was gifted a few saplings by a stranger during a train journey, who advised him and his wife to lovingly nurse them like children. Special protective sheaths enclose each fruit on the branches and trained guard dogs ensure that no unworthy hand tries to pluck them. These mangoes sell at the mind-blowing price of Rs 2.75 lakh a kg. 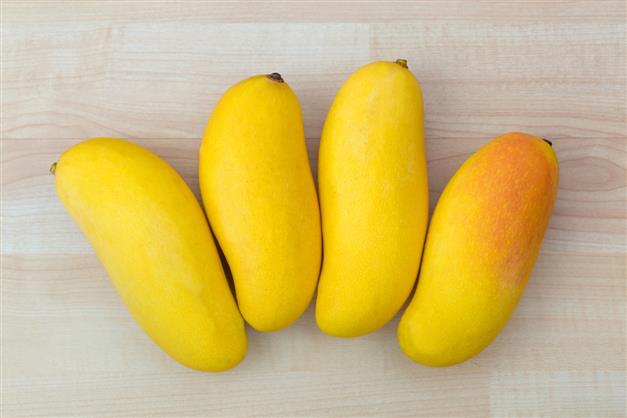 In Southeast Asia, different varieties of sweet mangoes are grown in southern, northern and eastern provinces that are paired with sweet sticky rice or added to salads. Mangoes in Thailand are called mamuang. Cultivated for thousands of years, these are named after their colour, ranging from green to yellow-orange, and shape. The local names translate as ‘green eating’, ‘black gold’ and ‘rhinoceros’. Mango festivals are celebrated in many parts of Thailand.

Other countries also grow mangoes but these are no match for Indian varieties. Brazil exports mangoes to the US in large volumes and many varieties like Tom Atkins and honey are used in shakes and ice creams. Africa has a fruit that looks like mango but has nothing to recommend itself. It’s consumed locally and added to one-pot dishes.